Mine is larger than yours

This is the english version of a post written in portuguese, which can be found here.
The sexual life of the nephilidea spiders is more exciting than you imagine, just check their sexual organs! 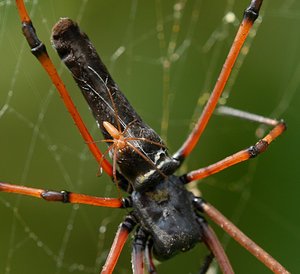 There are two interesting things about the sexual dynamics in the Nephilidae spider family: the females are much larger than the males (as you can see in the image above) and they are also polyandrous (one female may breed with multiple males). The opposite, polygyny (poly = multiple, gyny = females) is when a male breeds with multiple females, like the sea lions.
At the breeding season, the females stay at their webs while the small males look for them. Breeding, however, is not an easy task: many males perish trying to accomplish that. One strategy that works is to transfer the sperm to the female and guard it. If the male can stop other males to transfer their sprem to this female, it increases the chances to have all the eggs from this female fecunded with its sperm. To guarantee that, instead of damaging the female like some beetles do, the male self mutilates and leaves a piece of its pedipalp in the female sperm receptacle. Sometimes the whole pedipalp is left in the female, making the male an eunuch.
Obviously, this strategy is not advantageous for the female as the sperm competition may increase her chances to have fitter progeny. This conflict of interests, as you might imagine, fuels the Red Queen evolutionary competition.
This sexual conflict generates a wide range of kinky genitalia that would leave any sex-shop envy. While the males develop a series of hooks and projections that entangles inside the female in order to prolong the sexual act, and also increasing the chances of leaving the pedipalp blocking everything, the female develops folds, cavities and loops around the sperm receptacle entrance to avoid the pedipalp entanglement.
Along the Nephilidae family, many competitive stages can be found. In some species, the males are able to completely block the competing males whereas in others, the females are able to be receive sperm from several males even if pedipalp fragments remain in the entrance of the sperm receptacle.
This Red Queen-type competition among different sexes in this specific spider family is even more important than the known competition among males. The more complex the male sexual organs are, the more complex the female organs get. Some individuals of different species look even identical to each other, differing only by their genitalia.
The end result of this war among sexes is a huge diversification in this spider family.
Kuntner, Matja017E, Jonathan A. Coddington, e Jutta M. Schneider. “INTERSEXUAL ARMS RACE? GENITAL COEVOLUTION IN NEPHILID SPIDERS (ARANEAE, NEPHILIDAE).” Evolution (2009).
Photo: male and female Nephila pilipes. ©Frank Starmer