In the Dragon Ball manga, on several occasions the characters argue about the Fight Power. This is an apparently unclear concept, but it says a lot about the chances of one side winning the other in combat, given that it has a much greater Fight Power. In this chapter we will discuss how it is possible to explain the concept of Fight Power using the mathematical idea of Vector Product.

First, the Vector Product can be described in a “simple way” as an operation between N linearly independent vectors in a space of N+1 dimensions. Its result is also a vector, but orthogonal to all other N vectors. For example, imagine the three-dimensional space given by i, j, k. In it, the linear combination of the vectors X = {1, 0, 0} and Y = {0, 1, 0} (which are linearly independent) forms a plane in this space. In this case, X and Y are the canonical vectors of this plane, we can calculate the Vector Product of X and Y by building the following matrix and obtaining its determinant (Det.).

Note that the cross product of X and Y is Z = {0, 0, 1}, a canonical vector of this space and linearly independent of X and Y. The linear combination of X, Y, Z forms the three-dimensional space.

Another example of a Vector Product can be given by the vectors X = {1, -1, 3} and Y = {5, 0, 4}, in this case, they are not canonical vectors, but they are linearly independent (that is, there is no to form one by multiplying the other vector by a Real number). This means that the linear combination of both forms a plane in three-dimensional space. In this case, the cross product of these two vectors can be described by calculating the determinant (Det.):

Although not as simple to note as in the previous example, this Vector Product generated a vector Z that is linearly independent of X and Y (ie, it is not possible to obtain Z from the linear combination of X and Y). Thus, although the three are not canonical vectors, their linear combination also forms three-dimensional space.

Returning to the Dragon Ball and Fight Power theme. When we follow the battles in the manga, we see on special pages, information about the Fight Power of the characters. However, different from a “Strength level” or “Speed level” or “Psychic skills level”, Fight Power deals with a value with multiple factors involved, that is, the action of fighting. By this, I mean that in a fight skills do not compare in equal measures, such as Strength vs Strength or Speed vs Speed. But as a hodgepodge of them against another hodgepodge of them.

In the next three examples, the characters share great physical strength, endurance, vitality, speed, combat ability, knowledge of martial arts, have some special powers (release energy rays), so we represent them by a vector pointing to the right . However they differ by the following skills:

Example 1 – Tao Pai Pai is a character who does not hesitate to cheat in the fight to gain an advantage, attacking the opponent off guard or using swords and grenades. 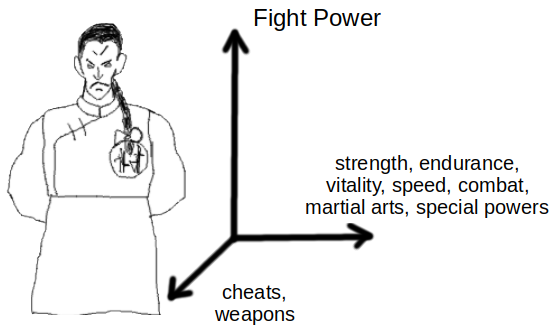 Example 2 – Master Roshi is a character with a well-developed fighting style in Drunk Boxing and is able to hypnotize his opponent to make him sleep in combat.

Example 3 – Son Goku is the protagonist, manages to use his tail in combat (genetic factor) and has a fighting style based on the movements of a monkey. 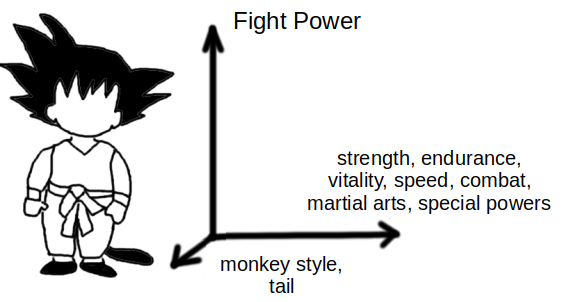 Thus, the Fight Power must be understood as a relationship of these multiple factors, the result of which is a comparative measure between the chances of victory and defeat of two characters in combat. Adding this concept with information available throughout the series, we know that a common adult human has Fight Power equal to 5. In this way, we can describe the Fight Power of an ordinary person in the space of N + 1 dimensions, defined by the product vector of N vectors, so this result will generate a vector of N + 1 coordinates in the form {a1, a2, a3, a4, …, an, an+1} linearly independent from the other N vectors and with a module value equal to 5, thus representing your Fight Power.

In this case, as we have an arbitrary number of vectors, there is no need to be economical in this matter, avoiding vectors overloaded with information like the one used in the previous examples (strength, resistance, vitality, speed, combat, martial arts, special powers) . In this way, we can partition any skill vector into as many canonical vectors as needed. This allows us to describe the characters from N linearly independent canonical vectors, each multiplied by a real coefficient greater than 0. This procedure thus facilitates the calculation of the determinant and its module, which will be given by the product of the nonzero coefficient of each vector.

For example, suppose that this space of N + 1 dimensions, is of dimension 3, and that the N vectors (that is to say 2 vectors) are respectively physical strength and speed. Thus, an ordinary human being could have the physical force vector = {√5, 0, 0} and the speed vector = {0, √5, 0}.

Thus, for N + 1 vectors, a common adult human could be described as.

Fragmenting the skill vectors in the form of canonical vectors multiplied by a real coefficient also arises from the need to properly describe how each skill influences the character’s Fight Power. For example, Goku in the first definitive match against Piccolo Daimaku, uses from kicks, punches, tail and even headbutt. We have each of these parts of your body with a different physical strength (its tail is not as strong as its head, which is not as strong as its kicks, which is not as strong as its punches). With this, we can represent physical strength from 4 vectors Vector-1 Arms; Vector-2 Legs, Vector-3 Head and Vector-4 tail.

If the character does not have a member (such as Piccolo, Tao Pai Pai, Master Roshi do not have a tail), it can be represented in the force vector as N√5. Given that the average adult human has Fight Power 5, its value in N√5 would not affect the calculation of Fight Power, it would be equivalent to the neutral element. Similarly, if we have a value greater than 0 and less than N√5, then it means that the vector is acting to harm the combat. For example, in the case of leg strength, at the end of Piccolo Daimaku’s saga, Goku had both legs broken, so they would contribute with a Fight Power greater than 0 and less than N√5. Because in these conditions, they act damaging the character’s total Fight Power. In general, the Fight Power for N vectors of N + 1 coordinates can be given by the following matrix. That considers N skills to be and allows the calculation of the Fight Power vector as (Value-1.1). (Value-2.2) … (Value-N, N).

Summarizing the main notes of this chapter to be considered in the process of assigning values to the vectors of each character considering their Fight Power.

It harms the Fight Power – if any of the abilities harms you in the act of fighting. For example, the ability to cheat present in Tao Pai Pai, could be considered in Goku as between 0 and N√5, given that his naivete makes him more vulnerable to these tricks.

It does not affect the Fight Power – if any of the skills are not part of the character, it does not benefit or hinder. For example, Master Kame does not have a tail, this does not affect him in the fight, either positively or negatively.

Increases Fight Power – in case any of the skills favor the character in the fight, such as the fact that Goku has a magic staff.