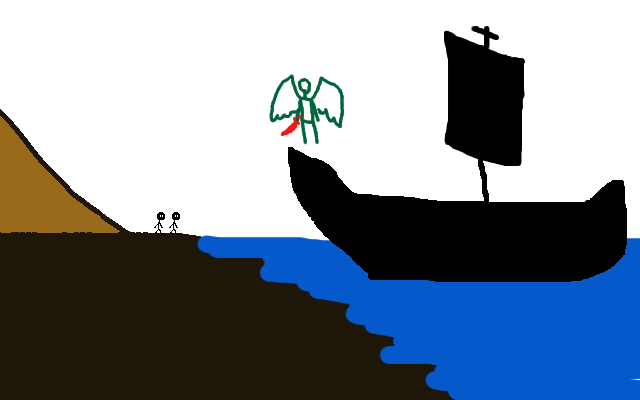 It is interesting when we imagine the conception of civilizations prior to ours, it seems that their notions of the world were very far from reality or even absurd. In this case, we will discuss in this text the topological view of planet Earth, more precisely until the date of 1472, when the first publication of the book A Comédia, by the Italian poet Dante Alighieri, which later became known as The Divine Comedy, took place.

I advance that I do not seek in this text to construct a general reflection on the vision of the people in this period, nor how the science of navigation faced the topology of the Earth. I just want to make a slight inference about a work that, in my view, was and still is, a landmark of scientific dissemination with regard to the topological understanding of this planet in which we live.

Dante (protagonist of the work) in the middle of a dark forest full of beasts enters what is the entrance to Hell.

In this way he goes down until he meets the Greek poet Virgílio who will be his guide on this journey. In the course of the plot they advance through the circles of Hell, descending at each level in which the sinners who live there are explained to them and interact in some way with the presence of Dante who is alive, among them, asking him to send messages to the living or tell them about what happened recently. The “adventure” continues descending more and more, reaching a point where it was necessary the help of a frightening creature to take them to an even lower level, and then demanding that a giant of antiquity help them to descend a little further …

after descending everything that was possible, there in the deepest point of Hell, they find Lucifer himself, trapped with his giant body in the soil from the waist up.

Through the gaps in the crack in which he was trapped, Dante and Virgílio descend, but instead of descending, right after the crack, they were now ascending, and they saw Lucifer’s legs facing upwards.

The way he is trapped on Earth is the result of his fall from the sky.

From this point on, they climb until they reach the mountain of purgatory, there they find a mountain so wide that their eyes do not differentiate it from a continent and so high that it was impossible to see the top of the horizon, but they know very well that at the top from the mountain there is heaven / paradise.

The souls brought to purgatory in a conventional way (that is, in different ways than the one taken by Dante and Virgílio), travel from the continent of the living there in boats guided by angels (stop here, since we already have enough for our discussion ).

Without assuming any previous format for our planet, let’s draw some inferences from the following observations:

From observation 1, we can say that the planet must have an immense depth to justify the long and humanly impossible descent to its center.

From observation 2, we can say that the continents are connected by continuous land masses.

From observation 3, we can say that in free fall from the sky to Earth, we find ourselves in a direction vertically opposite to the usual orientation on the continent of the living.

From observation 4 and 5, we can say that following the path that connects the continents by the sea, at some point the orientation (up / down) will reverse. Unlike Dante and Virgílio who climbed the rift, the boats do not make vertical turns in 90 degrees… therefore, this change of orientation should occur smoothly during the course of the vessel itself.

From observation 6, if the continent of the living were on the same three-dimensional plane as the mountain in purgatory, it would then be possible to see it, given its continental width and unreachable height.

From these observations, we can say that Dante dismissed the hypothesis of a flat Earth, because for him the planet was quite deep, with two continents connected by a continuous mass of land and also by the sea, with an orientation (up / down) depending on its current position. Besides the result of not being able to see the mountain of purgatory which is absurdly high and wide.

From these inferences, we can say that the spherical Earth model fit better in the context proposed by Dante Alighieri, justifying the other hemisphere as referring to the spiritual world. Finally, as his book was a landmark in publications and very widespread in his own time, the concept of spherical Earth was already “popular”, albeit subjectively, by Dante’s readers (which is no small feat).

It is interesting to analyze this book, since the author himself does not mention the format he imagines for the planet, but from elements and structures of his own construction of the universe of Hell, Purgatory and Paradise, we come to this that this is one of the simplest conceptions that meet your needs in the proposed universe.

Curious as the observation that one of the greatest authors of all times, who published this work in 1472, deliberated in his plot about a plausible explanation for the structure of our planet, justifying the unknown continent as occupying the other hemisphere, too that the navigations could only go to the other side guided by angels, or even that when crossing the threshold of the center of the Earth, there would be a change of orientation instantly (up / down).

These are aspects that impressed me and that’s why I decided to bring them to you, because it is not natural to see in him and his readers such ideas that are so clear to us in the 21st century, and also politely disguised in a context of fiction in which the topology a flat land would not support it, or even a land in a shape with not smooth curves would explain the navigation of boats guided by angels … finally a spherical topology (albeit flattened) is left to justify this work with such an important landmark for our Western culture.