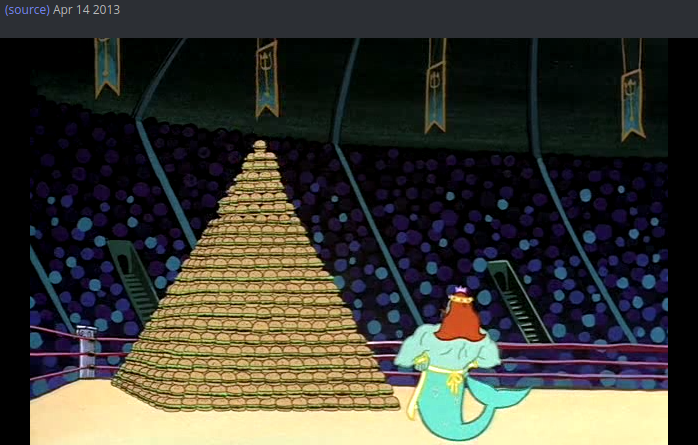 In episode 38 of SpongeBob, entitled “The Spatula Of Neptune”, SpongeBob removes the golden spatula from the stone (reference to King Arthur and Excalibur) and thus receives the title of worthy cook of the God Neptune. However, God Neptune himself comes to receive him but despises his sponge form, preferring anyone there over him. The result is that it imposes a challenge on SpongeBob, a contest in which whoever makes 1.000 hamburgers first will be the winner.

God Neptune makes hamburgers with his powers and sea creatures that serve him, while SpongeBob makes his first hamburger with love … but that is beside the point. The point is, God Neptune finishes the 1.000 hamburgers forming a kind of pyramid with a square base. So the question comes, is it possible to stack these 1.000 hamburgers like that? Well, the internet is a world apart, and I wasn’t even the first to think about it. In the image below, there is a post from 2013 talking about this same issue …

The author of this post made a simple calculation, given a pyramid of 23 floors, from top to bottom, the top floor has 1² hamburger, the penultimate 2² hamburgers, the antepenultimate 3², the next 4², 5², 6² … up to 23². Adding all the floors we would have 4,324 hamburgers.

If we square each of these quantities and then add up… we will not get 1.000 hamburgers… yes, we will get 2.008 hamburgers.

But you who love SpongeBob, don’t worry, let’s fix this here… first let’s go to some rules, no superior can have more hamburgers than a lower floor. For example, if on floor 1 we have 100 hamburgers, on floor 2 we should have a maximum of 100 hamburgers. Another point that we will fix to begin our analysis is that the pyramid has 23 floors. Finally, the top floor of the pyramid has exactly 1 hamburger and the penultimate one has exactly 4. Just to make things more interesting … let’s limit ourselves to having a maximum of 2 floors with the same amount of hamburgers. Thus, if floor 5 has 64 hamburgers, floor 4 or (in the exclusive sense) floor 6 can also have 64 hamburgers, but not both.

Under these conditions, the minimum amount of hamburgers we would have would be:

One point that we can also think about is that the pyramid is not square in shape but rather rectangular, that is, there are a number of hamburgers visible on one side and a visible number on the other and not necessarily both are the same.

We will keep the rule of the 23rd floor having 1 hamburger, of the 22nd floor having 4 hamburgers, and making the count that I presented earlier, we will try to stipulate how many hamburgers should have on the other side to form this pyramid with exactly 1.000 hamburgers, keeping of course the same previous rules.

In the case of the square pyramid, the two statements were equivalent, because if I had three floors in a row with the same amount of hamburgers, I would necessarily have three sides of the pyramid in a row with the same visible amount of hamburgers. However, when we change the definition to a pyramid with a rectangular base, this equivalence is lost, since we are now considering the total hamburgers on that floor, and this cannot be obtained only with the information from one of the visible sides. This increases our flexibility to deal with the problem, thus allowing us to find the solution that was presented.

This is a simple post, but it basically discusses something that mathematicians are very boring about, the correct way to define the components. A square-based pyramid might seem irrelevant to a rectangular-based pyramid, but this simple change in definition has already given us the malleability needed to solve this problem that, as we showed earlier, had no solution with a square-based pyramid. So the advice is, pay close attention to the definitions before starting to tackle a problem, and see if they make the solution possible … in any case, check if they are correct 🙂