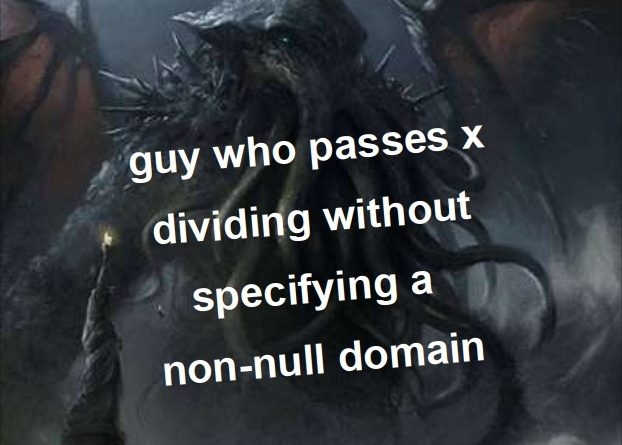 In those days (end of July / 2020) several memes of people circulate doing supposedly absurd things and being represented as gigantic and monstrous creatures, while a simple human in the scene would be the devil near these people. I find these comparisons very funny, but there was one that generated a little “discussion” among my friends.

The point of this meme is that in mathematics we always need to specify the domain of a division as being non-zero. That is, for a variable in the denominator, guaranteeing the values ​​that bring the denominator to 0, should not be considered. This is basically “specifying a domain”. For example, to say that a prime number is any number that can only be divisible by 1 and by itself, that would be wrong if we do not specify the domain of that property. If it is in the rational / real / irrational, then there are no prime numbers, since any number of these 3 sets can be divided by infinite numbers. However, if we specify the domain in Integers, we are also saying that there are no prime numbers, since any number other than 0 can be divided by -1 and its additive opposite. More generally, this definition of prime numbers applies only to the domain of natural numbers.

Note in the paragraph above, that when I mentioned that any integer number can be divided by its additive opposite, I remembered to remove 0. I did this because the additive opposite of 0 is 0 itself, and the division by 0 is not defined. Care is taken to justify the consistency of this meme.

Although this seems a little trivial, or even obvious, I bet you’ve seen a “trick” showing how to get that 2 = 1. If not, let’s see now:

See how cool, we arrived at 2 = 1, but why? The answer is simple, because we don’t specify a non-null domain. This happened when we divided both sides by (a-b), since being a = b, a-b = 0, right at this stage we divide by 0, which is an undefined operation. This allows us to arrive at any result (literally), since dividing by 0 would be absurd, and there is no point in proceeding after absurdity, since we can get what we want from it.

I hope I made clear the explanation of this meme, because there is malice in the hearts of those who spend x sharing without specifying a non-null domain, which even the devil is frightened by these people.

Just out of curiosity, the relationship of mathematics to “diabolical” themes is not at all unusual. The philosopher Saint Augustine (AD 354 – 430) already warns that “The good Christian must remain alert against mathematicians and all those who make empty prophecies. There is a danger that mathematicians have made an alliance with the devil to obscure the spirit and confine man to the bonds of Hell. ”

There is also a very cool book called “The Devil of Numbers” by author Hans Magnus Enzensberger. The story takes place around a boy named Robert who is constantly haunted by nightmares involving incomprehensible math in which he is always wrong, until he starts having dreams about a demon named Teplotaxl, who does all sorts of witchcraft with numbers and it changes the way you see math. It is a simple and very pleasant reading, even my mother who has a certain aversion to mathematics read this book and liked it a lot.