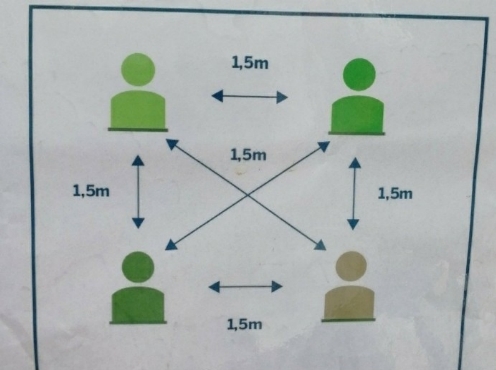 With the current pandemic, the need for distancing within public establishments meant that various materials proposing this safe distance were created … among them, we have the cover image of this post that became a meme involving the Greek mathematician Pythagoras (570 – 495 BC) being detained by other colleagues in the sciences so as not to freak out before this image.

The reason that Pythagoras is freaking out about this, is that we see the proposal that 4 people are equidistant 1,5 m each in the plane. The error of this representation can be easily perceived by drawing a right triangle as in the figure below. We have in it that the two legs are worth 1,5 m and the hypotenuse is also worth 1,5 m.

But if the three sides are equal, then it is not a right triangle, but an equilateral triangle. Yes, 3 people can be equidistant in the plane at 1,5 m each, but in the figure we have 4 people, and that complicates the thing. Let’s do some math and see what value we can keep and which is better to trade.

If the information of the collectors is correct, we will have:

If the hypotenuse information is correct, we have:

Thus, as we want greater distance between people, it is better to adopt that the legs were right (they would be worth 1,5 m) while the hypotenuse was wrong, and in this case it will be worth 2,12 m (better to be safe than sorry).

But the post does not end here … what if the image was actually right? Is it possible for 4 people to be equidistant each 1,5 m? As I said before, in the plan it is not possible … but in space it is! In this case, to consider the correct initial image, we would need to imagine that the 4 people were each at a vertex of a regular tetrahedron (a pyramid with a triangular base in which all its sides or faces have the same measurement).

So, if the warning was given to a store where customers are distributed over vertices of regular tetrahedrons, it is correct.

See Pythagoras, in the end we solve this 😀