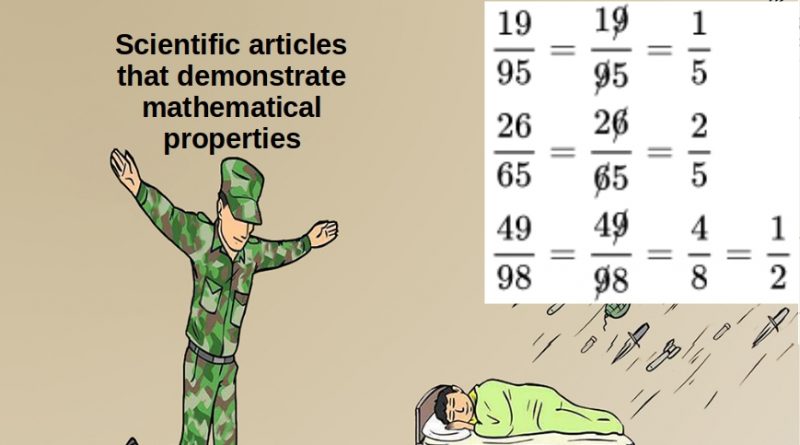 In Mathematics graduation we see many property demonstrations (whether they are called by various names as already discussed in the post ‘You’re weak lemma, you lack importance!‘). Part of the justification behind this requirement is the mathematician’s need to understand a result such as that the number 73 is the only one with the characteristics that make him a ‘Sheldon Prime‘. Another point in favor of the study of the demonstrations, is the mathematician’s own mastery of what underlies certain results, or even, the way in which this allows him to draft arguments that validate or refute new propositions. New ‘discoveries’ in mathematics are disseminated from scientific articles in the field, and once the demonstration becomes public, we can use it at our leisure without any worries.

While being aware of the veracity of a mathematical property is an arduous process, we see many ‘tips’ or even ‘secrets that your math teacher doesn’t want you to know’, involving simpler ways of doing some calculations. They involve rules, techniques and procedures ‘apparently’ clearer than the original concept behind, such as the idea of ​​’passing to the other side with the opposite sign’, or ‘crossing to the other side’. In fact, they are rules that streamline the process of calculating, but when you skip the step of understanding the concept that allows you to act in this way, I consider such techniques to be preventable and even dangerous to be used lightly.

But then the question arises, if the rule works, why not use it?

The cover image is a meme of my own adapted from “https://www.reddit.com/r/MemeTemplatesOfficial/comments/cl7ydo/the_silent_protector_meme_soldier_failing_to/” and one of these ‘tips’ on how to simplify fractions in an easier way . In this meme we see the soldier representing the “Scientific articles that demonstrate mathematical properties” and on the other side a sleeping child, about to be hit by various projectiles and weapons that will cause him immense damage (the “rule” of simplifying fractions with Natural numbers of two digits in the numerator and denominator).

It sounds like a “joke”, but in fact this is a rule that works for these 3 cases:

We have 9 solutions to this problem directly, just taking X = Y = Z, we will arrive at solutions like:

Thus, between 11 and 99, the set of solutions for the cases in which this rule works are:

Playing around with permutations a bit, we have 81 options for the numerator to vary between 11 and 99 (because we ignore the numbers with 0), and we have 81 options for the denominator to vary between 11 and 99 (for the same reason). With that, we arrived that there are 81² (6,561) numbers that way, and of these, only the 13 cases above work. That is, if we draw a number in this way (two digits at the top and two digits at the bottom) and I use this rule, I have an almost 0.2% chance of this rule working for this situation, and another 99.8% chance of it not worth it. Because of these 6,561 cases, in 6,548 of them this rule does not apply.

This was a somewhat exaggerated example, but it serves to show how, despite a seemingly simple rule, it brings a number of exceptions more expensive than the use of standard fraction division procedures. For example, when we say that in equations we can ‘pass a number to the other side by changing the sign’, we can fall into the following misconception:

But given this situation, we can think of adding a ‘rule’ about the equation having only an equal sign … but the problem with the rules is exactly that, as we try to correct them, we end up making them more complex than it would be his initial intention to simplify the mastery of the concept. In fact, in equations, we do not pass anything from one side to the other, what happens is to add, subtract, multiply or divide (by a number other than 0) the same value in all equalities, since this does not affect equality . Although it can lead to a useless situation, as in the example below.

There is absolutely nothing wrong with multiplying all parts of equality by 0, although that does not come close to finding out what the value of x should be. In this sense, understanding the concept guarantees you that this operation is correct, which could be counterintuitive in the use of ‘rules’, because if they serve to facilitate the accounts, there should be a rule saying ‘don’t multiply by 0’, however this it is allowed, although it is a useless action in the search for the unknown value.

In many other situations, the idea of ​​passing the technique over the concept can lead to mistakes and exceptions, as in the case of Differential Calculus, when the student applies the L’hospital rule without first checking if the functions to be derived were really indeterminate .