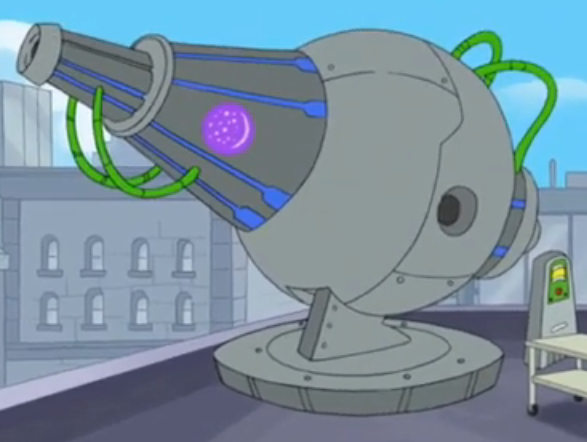 Phineas and Ferb is a design that I really like, mainly because of Dr. Heinz Doofenshmirtz’s inventions, which carry the suffix “inator”. I was here reviewing some inators and I decided to look for a list of the most powerful… but I didn’t really find anything. If you’ve seen the drawing, you’ll certainly understand, given that inators are “strange” and sometimes even doubtful malice, such as the “resting-inator”, which is just a comfortable armchair, with a lamp, slippers, TV, popcorn, fan, refreshment, lamp, a book, parasol and a cat to stay on the person’s lap while they rest.

So, back to the question … what is the most powerful inator that Dr. Heinz Doofenshmirtz has ever built? Although it doesn’t seem like it, I consider the Fedor-Inator to be the most powerful (Episode 51, “Attack of the 50-Foot Sister”, aired on February 21, 2009). And in this post I hope to explain to the point that you reader agree with my arguments 🙂

Fedor-Inator’s goal was to spread the odor of dirty diapers through the city’s Summer Festival, as the Doofenshmirtz building is next door, people constantly pester him by asking to use the bathroom. Thus, Doofenshmirtz concentrated the odor in a kind of liquid extract inside an Erlenmeyer flask (illustrative image below).

An Erlenmeyer flask of this size has an approximate capacity of 500 ml when filled, so we can limit the volume of those used in the drawing (which were not completely full and did not appear to be larger than the one in the image) with volumes less than or equal to 500 ml.

In the drawing, Phineas and Ferb use an elixir of growth on a watermelon and then Candance (their older sister) also uses it. The effect of the elixir seems to occur with the application of a very small amount of the liquid, let’s assume a very full tablespoon, or also estimating upwards, 20 ml or 0.00002 m³. She is 1.65 m tall and estimating her weight (considering normal BMI) say 60 kg. Assuming its volume, it is not wrong to limit it to 200 liters or 0.2 m³. In this way, 0.00002 m³ of the elixir generated, in a direct application, a homogeneous effect in 0.2 m³ of Candace. Thus, its natural effect is in the range of 1 to 10,000.

This already seems a lot, given its ability to spread liquid content in these dimensions. But it turns out that in the fight against Perry the Platypus, Doofenshmirtz confuses the vials and puts in his Fedor-Inator the elixir of growth, and also accidentally hits the inator by accidentally changing the scope of its effect that was the Summer Festival , now, for the entire universe.

Although the size of the universe is an open discussion, we will estimate below given its origin 13.7 billion years ago and its constant expansion at the speed of light in a three-dimensional Euclidean geometry (yes, this is a low estimate, given that it is already known that the universe expands in more misshapen ways). Anyway, assuming it is a sphere of 13.7 billion light-years of radius, we have that its volume will be:

And in fact, the inator spread the elixir of growth throughout the universe, that is, in this low estimate we would have that the inator generated an effect from 1 to 1.8 * 10⁸² (this is because we estimate the size of the universe below). And just to close the argument, with this inator, the effect of the elixir would then be 1.8 * 10⁷⁸ times stronger than its direct use.

We can also observe that the effect of the inator was almost instantaneous (say 1 second), this means that the speed with which it propagated the elixir was within the radius of the universe (we estimate below 13.7 billion light years), in 1 second. That is, this makes the speed at which this inator launched the elixir, 4.32 * 10¹⁷ times faster than the speed of light.

For these reasons, I consider this to be the most powerful of the inators!

And you, which of the inators do you think is the most powerful, leave the answer in the comments 😀

Cover image taken from Phineas and Ferb’s Episode 51, “Attack of the 50-Foot Sister”.