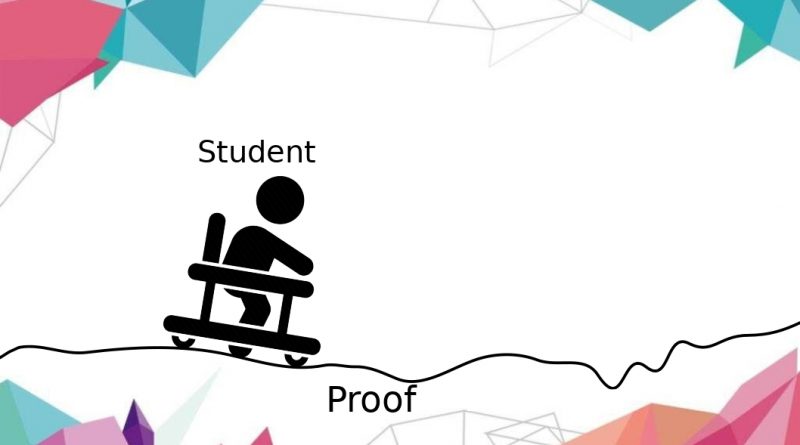 When I say that I have a Science Blog, several people (mainly in the academic world) already assume that my research has to do with it (Scientific Dissemination) or the impact of blogs, or something like that. The answer is no, I do Scientific Dissemination because I feel a duty as someone financed by taxes, to communicate about science to the population, and also because I like to write these contents (hopefully this must be the strangest blog in the entire community 😀 ). But well, what do I search for anyway?

I research a model of a “baby walker” to demonstrate theorems. Yes, a baby walker, similar to those used by young children so that they are encouraged to walk alone and thus develop their psychomotor skills faster. But what would that baby walker be for theorem demonstrations?

To explain this, first let me tell you a little (based on my academic experience in mathematics) how people learn to demonstrate.

In most mathematics subjects (for mathematics classes), at certain times the professor interrupts the presentation of the contents with the intention of “showing” how to get to that result (that is, making a demonstration). The students who accompany the class attentively watch the “movements” of the professor, who meticulously runs through the entire trajectory that involves the demonstration. Despite giving immense satisfaction (perhaps not immense, but it does give a good taste at least) to watch someone demonstrate, the student’s participation is passive, and sometimes he is not even able to observe the path they have traveled (to understand the problems in the domain , the properties used, the cunning movements that were necessary …).

However, just watching the professor demonstrate things, this is not nearly enough to understand how to write a demonstration on your own. The student then proceeds to the “usual process” of learning, looking in books for occasions where something is demonstrated, but there is a tendency for books to generally show trivial examples, extremely simple and almost unnecessary demonstrations (except for some books considered to be hardcore, which really demonstrate ‘fun’ things), implying that the whole thing comes out smoothly and even “Natural”. Then after a few attempts, several falls, the student begins to demonstrate what the book offered (and feels confident that he understood how to demonstrate).

The next step is that you end up finding not-so-‘behaved’ demonstrations, demonstrating this is tragic, as it is outside the trivial, and begins to demand some trickery and creative schemes. If the student follows this path, there will be many stumbles, many falls, many attempts, until he gets the skills necessary to walk that path. This process is laborious, takes time and in a way, is very discouraging, although this way of thinking is somewhat hard, as it follows, it is what separates those who will follow in Mathematics from those who will migrate to other areas.

An ‘ideal’ alternative for these stumbling blocks is the accompaniment of the student by someone who knows how to walk this path, but which is different from showing how to walk, giving support to the student, so that he can walk without so many accidents. I say that it is an ‘ideal’ alternative because in practice it doesn’t happen, most of our study time is lonely or with other people as lost as we are. Having someone with mastery of the content to help us in this step is really unusual or even illusory, as it is not enough to have this follow-up for 5-10 minutes, it is something that takes a little more time and regular practices.

And then my research object appears. Baby walkers for demonstrating theorems. That is, autonomous structures that can be used by the student in his own time to practice the mishap over more uneven paths, without so many trips and falls. Thus, I have the hypothesis that the student, when accompanied by these structures, will develop more quickly and less ‘suffered’, the skills necessary to walk on this path. Making sure that when the baby walker is removed, the student will be able to deal with several of these not-so-behaved demonstrations alone.

Thus, within this hypothesis, I investigate different structures that can help in these skills while comparing the student development in these structures with the traditional way of learning demonstrations and with the use of variants of these walkers.

So far, I base myself on the observations with this resource of 115 participants in 5 subjects offered at State and Federal Universities. In the meantime, I realize mainly that the use of walkers helps more those who initially (in observations without walkers) stumbled more (wrote steps with logical, conceptual, incomplete or unnecessary errors), that after using walkers, these accidents decrease a lot. However, I realize that in students more accustomed to demonstrating (which initially already managed despite some stumbling blocks, reaching a satisfactory result), the use of walkers brought an improvement equivalent to not using it. In this case, I suppose that the student’s own practice with more demonstrations (regardless of support) was the cause of this improvement.