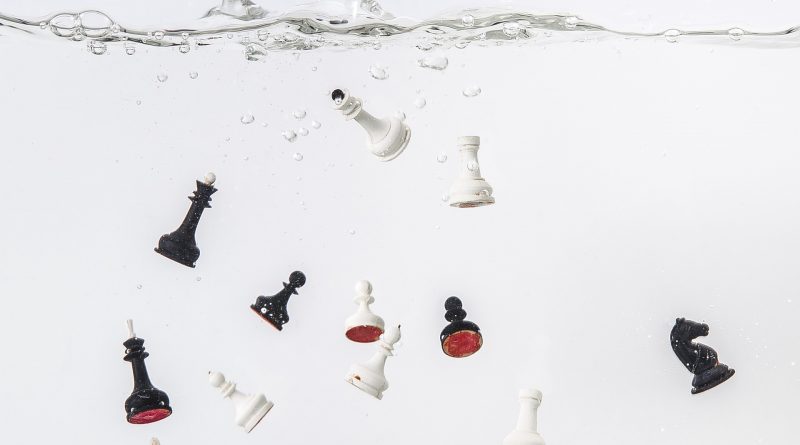 Imagine an ordinary, rectangular chess board with 64 squares. So we started a process of rounding its edges, rounding all the squares so that we ‘almost preserve’ its structure, as shown below.

Let’s put the pieces together, so it doesn’t look too strange to see.

See that there is an immense similarity to the movement of the pieces, we will show this in a more isolated way to make it easier. Pawns, for example, can make their initial moves as follows.

The horse is also easy on that board.

The bishops have no problem with this board format.

The king’s movement is not affected as shown below:

At this point in the post, you may be thinking that the circular shape of the board is only aesthetic, thus not affecting game dynamics. But things will be fun with unlimited horizontal and vertical movements, like towers and queens.

We will first look at a simple case of the movement of the tower. It has vertical and horizontal lines at its disposal to move, right? Not necessarily. Let’s look at a slightly less behaved scenario first to understand what this ability to move means. In the figure below, what restricts the tower’s movement?

Following the logic of its movement along horizontal and vertical lines, it could move as follows:

After all, it ‘just’ followed the curved vertical line in front of her, or the curved horizontal line to his right. Now let’s look at a slightly more interesting scenario.

In the same way as the tower furthest from the center, it would be able to follow a horizontal or vertical line in this curved plane, the tower in a position closer to the center, it would also be able to follow in the usual 4 directions (north, south, east and west), but also within your circle, two-way, clockwise and counter-clockwise. For in this circular board, we have our vertical and horizontal lines, but we also have that the movement within the circle in which the piece is found, would also fit as a horizontal or vertical movement.

Just to pique your curiosity, about this ‘singular’ variant of chess. In a blog post I discuss why in traditional chess, it is impossible to perform a triple check. But in this circular variant we have the different characteristic of the classic version, that the same piece threatens another for more than one direction, this is no longer an impediment, as I show below.

Thinking for a while, we can even make a quadruple threat, as I show in the two bids below.

Have you ever thought, having your King threatened in 4 different directions, scary and curious, don’t you think?