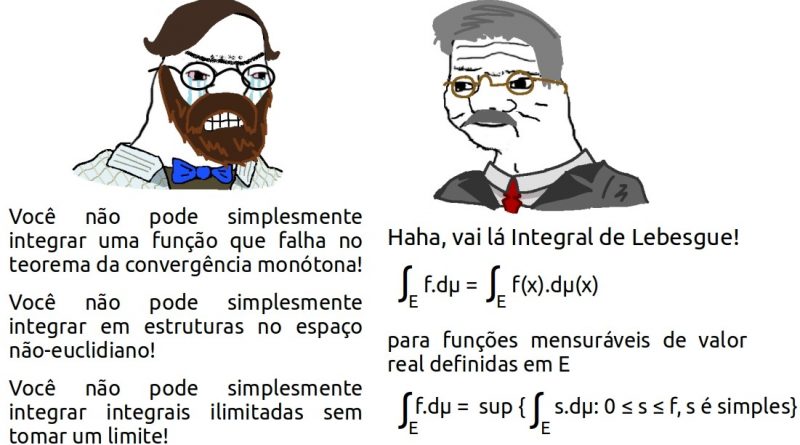 When we think about Scientific Disclosure, it is important that the elements of communication are present in the process of dialogue between the researcher and the public.

According to Terra and Nicola [1], the word communication is rooted in the common word: communicating is the act of making common, known.

Jakobson [2] argues that for communication to occur, the following elements are necessary:

To contextualize this discussion, we will take the Measure Theory. A field of mathematics studies that was developed between the 19th and 20th centuries by Emile Borel, Henri Lebesgue, Johann Radon and Maurice Fréchet, whose main applications are:
foundation of the Lebesgue integral, which generalizes the Riemann integral;
axiomatize Andrey Kolmogorov’s probability theory;
define integral in more general spaces than Euclidean ones [3].

In the meme below, the humor is found in the fact that the Lebesgue Integral, one of the fields of study of Measure Theory, is applicable without several of the conditions necessary to realize the Riemann Integral. Thus, the character on the left defends Integration according to the requirements necessary for the Riemann Integral, while the character on the right doesn’t even care about any of these requirements and already assumes that the Lebesgue Integral will work.

Another example of scientific dissemination of Measure Theory appears in the actions of Silvius Klein, PhD in Mathematics from the University of California, when he introduces his Measure Theory course presenting a character from the digital game Pokémon (figure below) as “a reasonably accurate representation of the techniques and topics of study in this area”. Affirming that to make the representation even more accurate, it is up to the subject to “increase the resolution” (ie, represent the image with smaller and smaller squares).

Finally, we also have the approach of Regis Varão, professor and researcher in Mathematics at Unicamp, on his YouTube channel Fantástico Mundo Matemático, which contextualizes some results on Measurement Theory in a fictitious planet and with very peculiar conditions.

The three examples presented to communicate the Theory of Measure topic to the public have some similarities and differences within the aspects discussed as necessary for communication:

With this superficial analysis, it is already possible to identify how each example communicates its message to its specific audience according to its known codes and the intended psychological connections.