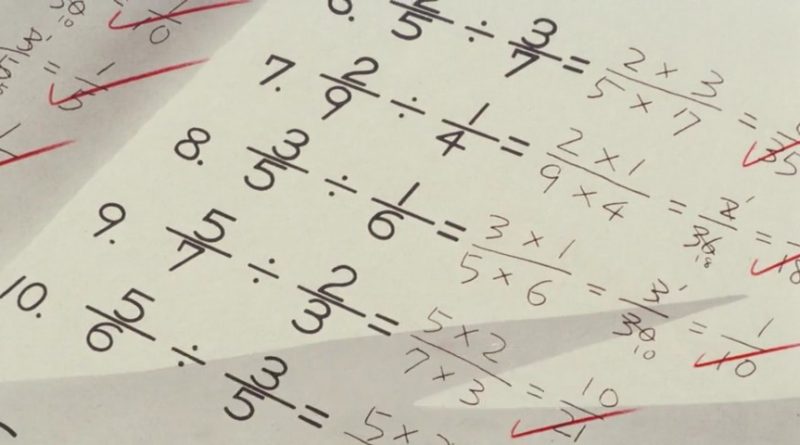 The mother, worried about the grade that her daughter (Taeko) got on the tests, asks her other daughter (Yaeko) to help her. Yaeko is baffled by the fact that Taeko cannot perform those calculations she considers too easy and goes to question her mother about it, who claims “Taeko is not a normal child”.

The moment Yaeko (Taeko’s sister) sits down to help Taeko with this content, Yaeko immediately takes the second fraction, inverts the denominator with the numerator and performs the fraction multiplication operation, questioning if Taeko’s school “didn’t teach this ?”.

In fact, I learned that at school, and it’s likely that you reading the post also learned this rule of “invert the fraction” and then “multiply”. Learning a rule is simple, we learned for example that when serving a dish, you serve it to whoever is at the table on the left and remove the dish on the right.

In the context of the anime, Yaeko confronts Taeko, about whether splitting fractions “is so simple” because she keeps getting it wrong?

However, Taeko asks his sister “what is it to divide a fraction by a fraction, anyway?”.

In this context, Taeko draws an apple and separates it into 3 parts. So you ask what would be 2/3 of an apple divided by 1/4?

His sister tries to explain in a context of apples what it would be (2/3) divided by (1/4), but she can’t, and asks Taeko to forget about the apples and just remember to invert the fractions and then multiply them.

In a following scene, Taeko’s family is worried about her about her poor performance in Mathematics, even intending to take an Intelligence Quotient test in the “hope” to find out why she couldn’t solve these accounts, even justifying that she it may have been like that after falling head over heels as a baby, or that the reason for not doing well in math is to talk a lot in the classroom.

The anime shows scenes of 10-year-old Taeko following the 27-year-old Taeko, who even today admits to divide fractions is difficult for her. Who questions a friend about whether in his childhood he could invert the fractions, and because he doesn’t remember, she assumes that if he doesn’t remember, it must have been easy for him, given that this difficulty was remarkable for Taeko, being difficult to forget about her.

Finally, Taeko says he hears about people who are good at fractions having easy lives. Taking the example of a completely ordinary girl, not even good at math, but who can always do the math with fraction the right way, who is now married with two children (conditions Taeko judges to be signs of success).

Besides the fact that I loved this anime, I realized that it has two themes that are very serious to deal with.

Let’s stop here, but the discussion continues in the next post: Taeko Okajima’s difficulty with fraction division: part 2.