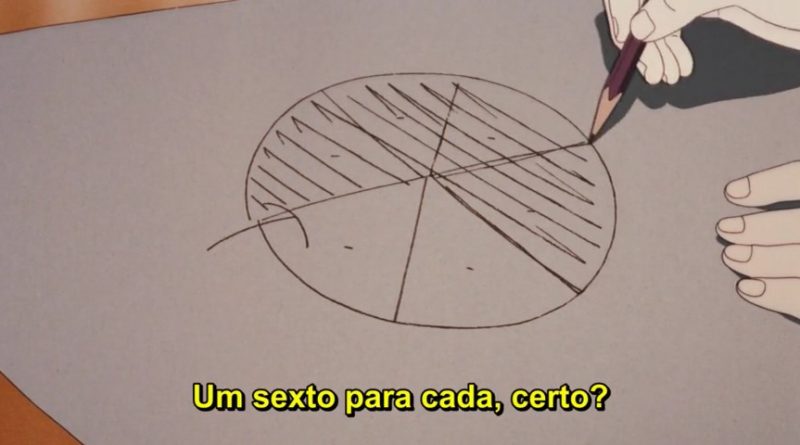 In previous posts I talked about the difficult relationship of the character Taeko Okajima with Mathematics (part 1), the role of mathematical definitions (part 2), how to divide an object to “fractional people” (part 3) and the importance of reviewing mathematical content as fractions (part 4). To end this series, we bring the concept of Taeko who, at age 27, recalls her difficulty with fractions at age 10, and who considers the ability to do these maths, a necessary condition for her standards to achieve a successful life.

Taeko at the age of 27 still carries the stigma he suffered at age 10, of not being able to divide fractions, and compares himself with other girls who could and today find themselves in a position that Taeko would like to be. The impact of mathematics on Taeko’s life was quite traumatic, so much so that she considers that it must have been traumatic for everyone who, like her, had difficulty with dividing fractions at school. Considering that people who do not remember this stage of school life, it is because they were able to perform this operation without difficulty.

As discussed in previous posts, Taeko’s doubt began with the confusion of terms used in common language with those used in mathematics. Going through these terms without due care, Taeko already faces the first difficulty, understanding how something that multiplies can reduce, and something that divides can increase.

Then Taeko is faced with her sister’s difficulty in that matter. That despite knowing how to operate fractions, he doesn’t understand the real meaning of those procedures, not being able to explain to Taeko any other way than following the rule he learned.

This difficulty with fractions appears even in the Brazilian scenario, as seen in the previous post, given that once we move this content into the school curriculum, we continue without going back to it, although it will be present in the coming years and it is assumed that the students will dominate, which is not actually true.

Finally, in this post, we bring the stigma that Taeko carries, which reflects a simplistic view of the educational system, of placing mathematics as a condition of intelligence or even a requirement for success. Yueko (Taeko’s sister) could easily do 20 exercises involving splitting fractions, but maybe couldn’t answer a question about “what are fractions?”. Questions like this seemed to have little or no importance to Yueko, who viewed mathematics in a procedural way, aimed at getting the right results on the test. While they revealed in Taeko a deeper interest in mathematics, mainly related to understanding its meaning in a more abstract way.

Taeko, already in adulthood, claims to be able to operate fractional division (that is, he memorized the procedure), but that curious nature that made him question and try to understand how fractional division really worked, was suffocated and now accompanied it as a trauma to consider yourself bad at math.

With that, I close with the reflection that being good at math is just a skill. People are good and bad in a lot of things. It doesn’t make them better or worse, just different. Taeko’s doubt, interpreted by his sister and family, as a deviation in math skills related to doing math, is for the mathematician a source of curiosity that leads him to explore a certain topic in depth. That is, there is a genuine and pure interest in Taeko for mathematics from the doubts that she raised and that prevented her from following the procedures without first clarifying them.