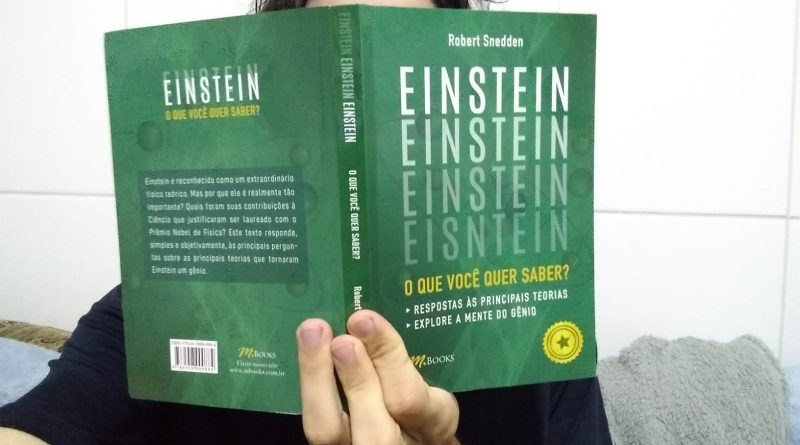 I remember the walls of a school where I worked a graffiti by Einstein and the formula E = mc². It seems that people just adore this figure and these associated letters, without even understanding what it means or who this man was.

So… I admit that I knew very little about it, what I studied in graduation involved Mechanical Physics, Thermodynamics and Electromagnetism. I only went to review a little bit of Physics after the Masters when I set up a PhD project involving the Teaching of Quantum Mechanics (I’ve already mentioned this in some posts). Finally, to set up this project, Professor Aguinaldo (from Unesp Bauru) gave me his class notes for this discipline and I started to study this subject a lot (but why am I talking about Quantum Mechanics?).

Well, at the end of the 19th century, Physical theories were going through a series of problems. Several points where models went wrong began to appear. At first they are treated as exceptions, or specific rules are created for that behavior. But as the number of observed exceptions increases, it seems that the current theory is no longer of use, and it is therefore necessary to adopt new ways of looking at things.

Einstein is linked to the Theory of Relativity by proposing a movement in which the speed of light is an unaltered constant independent of the observer. Going in the opposite direction to the idea that we can constantly accelerate an object until it exceeds the speed of light (Newtonian view). Because, as the speed of light in the theory of relativity is constant, we have that an accelerated object will reach a point where instead of gaining speed, it will begin to gain mass!

Because the energy (E) of its acceleration cannot be stopped (since we are accelerating the object), then, as the speed of Light (c) is always the same, we have that energy converts into Mass (m). In other words, objects close to the speed of Light become increasingly heavier, and consequently more difficult to accelerate. We would need more and more energy, and this energy would convert into Mass… hence, that formula “E = mc²”, or, Energy is equal to mass times the speed of light squared.

A consequence of this formula (and perhaps why it is so famous) is that the mass of an atom can be converted into energy! Hence the principle for the atomic bomb… but this subject is already too complicated for me to try to explain.

Anyway, I didn’t comment on Quantum Mechanics at the beginning of this post for nothing. Although Einstein had little direct work in this field of physics, he was a severe critic of this area. Einstein lived in discussion against this area precisely because he did not believe that randomness could exist in the universe, and that it was just a lack of precision in our instruments when inferring that something happened randomly.

I think this is actually the most interesting point that this whole book has brought up. For rational criticism and opposition to a theme often has more to strengthen it than naive support and encouragement. For example, my work with proofs of theorems, I love it, I think it’s an innovative thing and it can help a lot in learning… but I know I need very tough critics to force me to see aspects that so far because of my optimism and passion by the theme, I’ve been ignoring (and not even realizing). In this sense, as much as we like a theory, having someone to criticize it is not bad (as long as the criticisms are serious). And if by chance your theory does not resist some criticism or opposition to it, that is also good, because it indicates that your theory was perhaps not strong enough or even not true.

So, in the midst of what I studied in Quantum Mechanics, I saw a lot of this micro universe, its formulas and as I read this book (“Einstein: o que você quer saber?” by Robert Snedden) I saw a little of the points that at first the people think about criticizing (feeling innovative for having this idea) in the proposed thought experiments. Actually, neither Quantum Mechanics nor Relativity are easy subjects to understand at first sight, maybe I understood this book a little easier because I already had in my hands several of the pieces of this puzzle that involved the rupture of Physics at the end of the century. XIX. But I believe it is a read with an “acceptable” level of difficulty for most people (they will probably get lost at various times, but that doesn’t mean the pleasure that the book provides will diminish).

I believe the book gave a good overview not only of Einstein’s theory and work, but also of the social, historical and political scenario that revolved around this man. That despite having made some scientific mistakes, the biggest mistake he regrets was having suggested to the President of the United States, to create an atomic bomb.

I thank Editora M.Books for the courtesy book “Einstein: o que você quer saber?” by Robert Snedden, who enabled the production of this text.