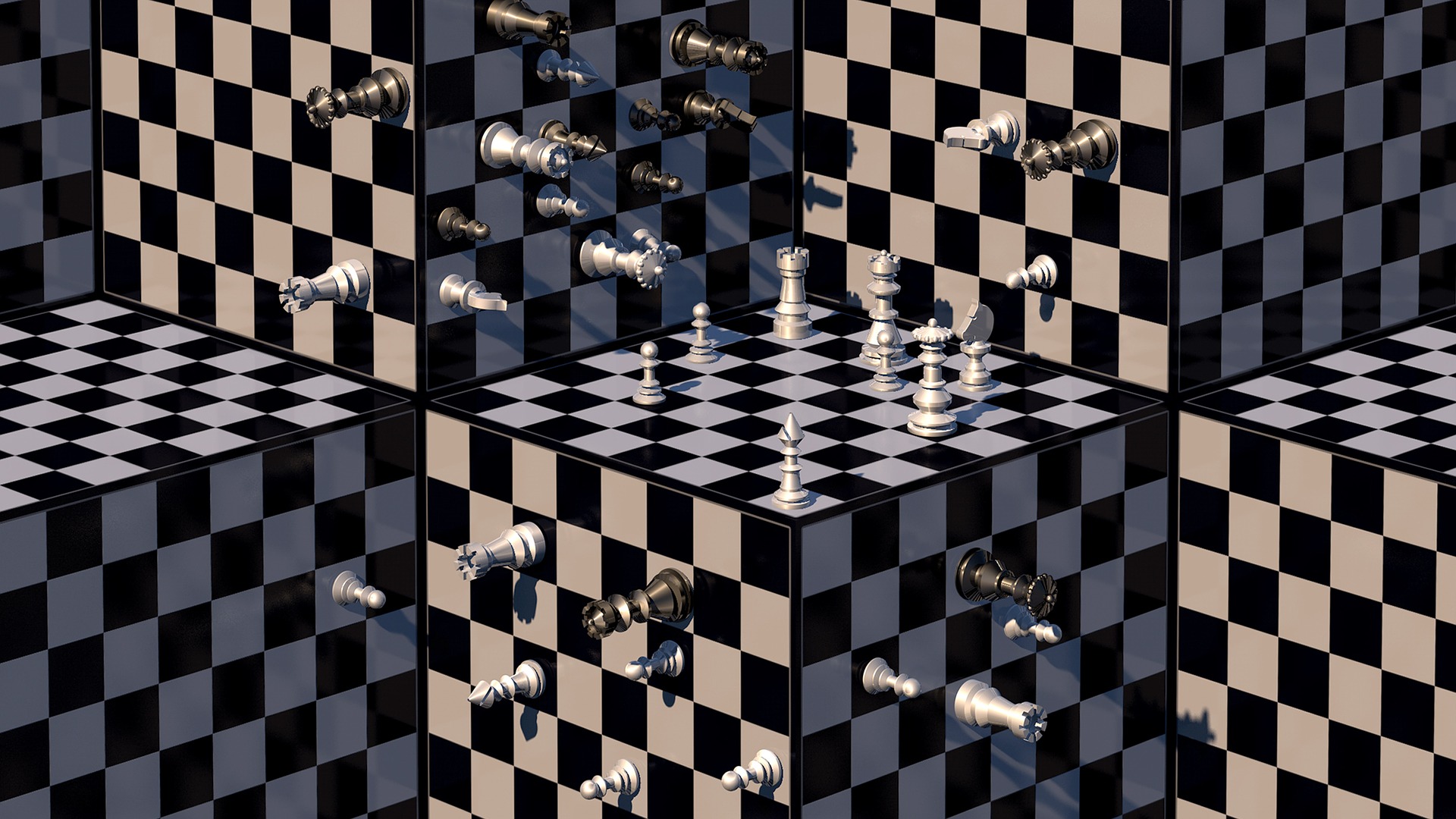 In this text I come to present a simple but effective solution to a dilemma for every creative chess player with more than one friend: how to play classic chess with 3 or more players?

The dilemma is not new, since there are several solutions proposing modifications to the board and consequently to the pieces to make this challenge feasible. In an ironic scenario, in the series The Big Bang Theory, the protagonist Sheldon Cooper gets to work on developing a solution to this dilemma. This occurs by modifying the shape of the board, the houses, the movement of the pieces, leading to the creation of two other pieces that can be combined to generate a third new piece… in the end the game becomes so complex that Sheldon, Howard and Leonard need true multi-page manuals to play, with additions like golf carts, time machines and catapults … (if you were curious, this occurs in episode 22 of season 4, “The Gnu Implementation”).

In slightly more serious contexts (if we are dealing with games we can say that we must be serious in order to achieve our goal …) we have some modifications of boards and adjustments of pieces that allow the game of a triple chess. Honestly these solutions have always bothered me, I think that the moment we severely change the structure of the board and pieces, we are no longer playing chess, but a similar game, but that allows three players.

In this context, to facilitate explanations with examples, we will name players A, B and C. Each player will have pieces on two boards called T1, T2 and T3.

The pieces of each player simultaneously occupy two of the three boards (dimension 4), so to move a piece, its path must be unobstructed on both boards (except for the Pawn’s attack movement, in which the attack viability on one board and the unoccupied space in the other, allows the piece to move diagonally across this board, differing from what would be its natural movement).

Respecting the criterion that a piece coexists on two boards, if a piece is eliminated on one board, it will be on the other where it exists. Similarly, if a player eliminates two pieces (one from each player) with the same movement, each of them will disappear on the other boards.

Game conventions that determine draw, check and checkmate need to be ignored as long as there are three boards in play. In this case, the game continues until one of the three Kings is eliminated (checkmate would not make sense since there may be interference from the third player). When this happens, two of the boards lose their sense of existence, and the game takes place with just one board, thus resuming the standard chess conventions.

Do not worry if the explanation seemed confusing, below I illustrate the first 6 actions of a match in this game accompanying players A, B and C. 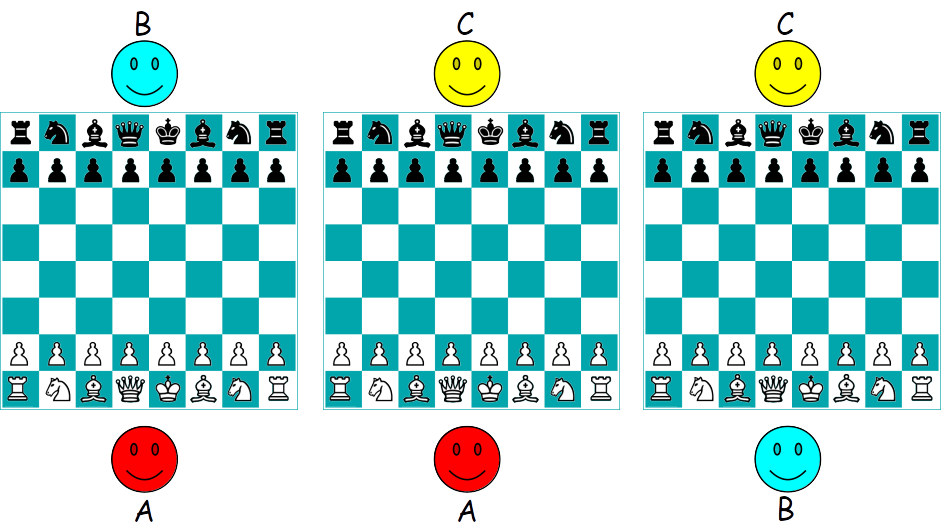 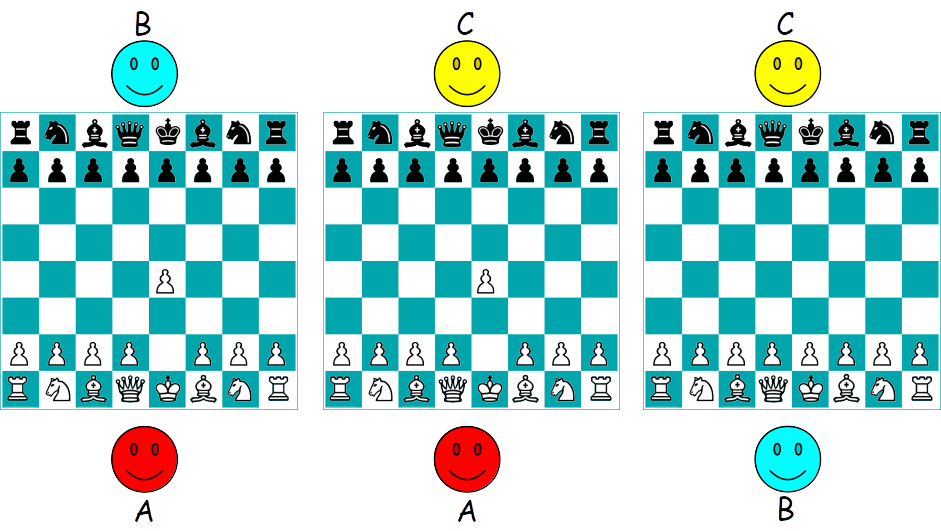 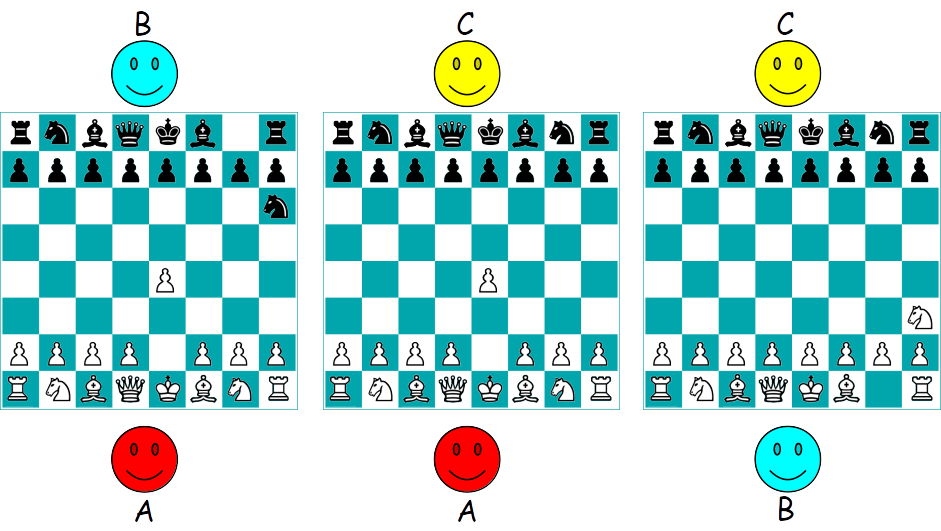 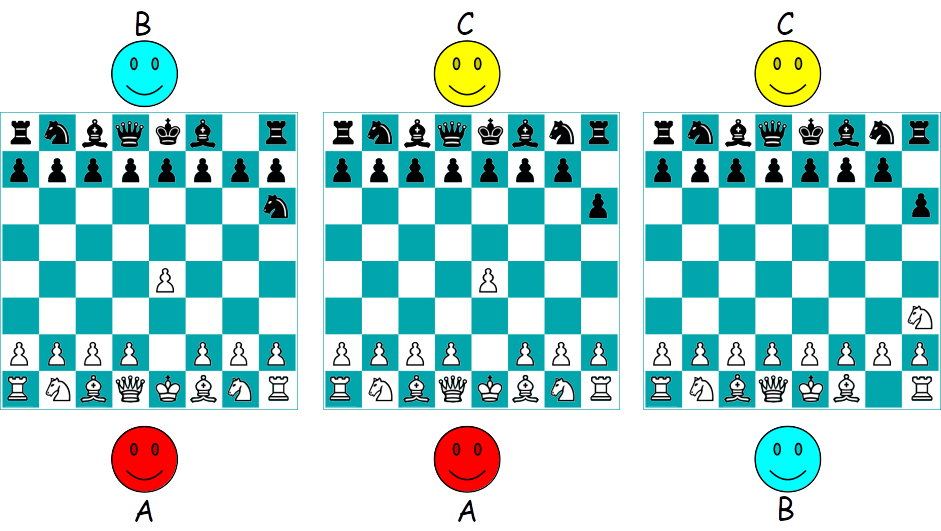 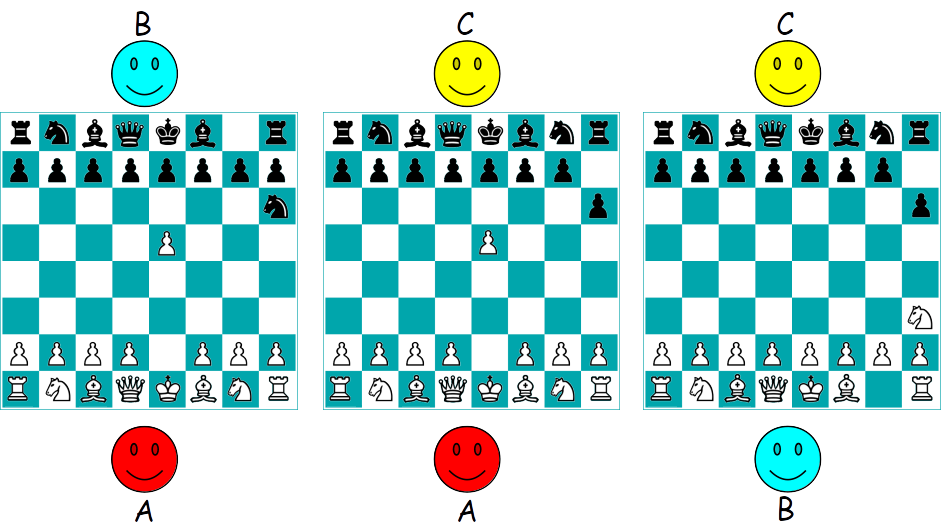 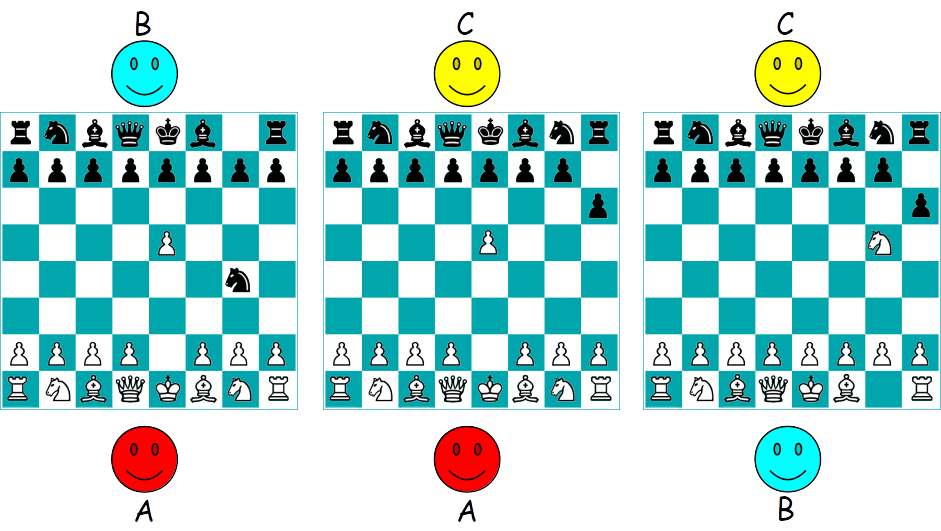 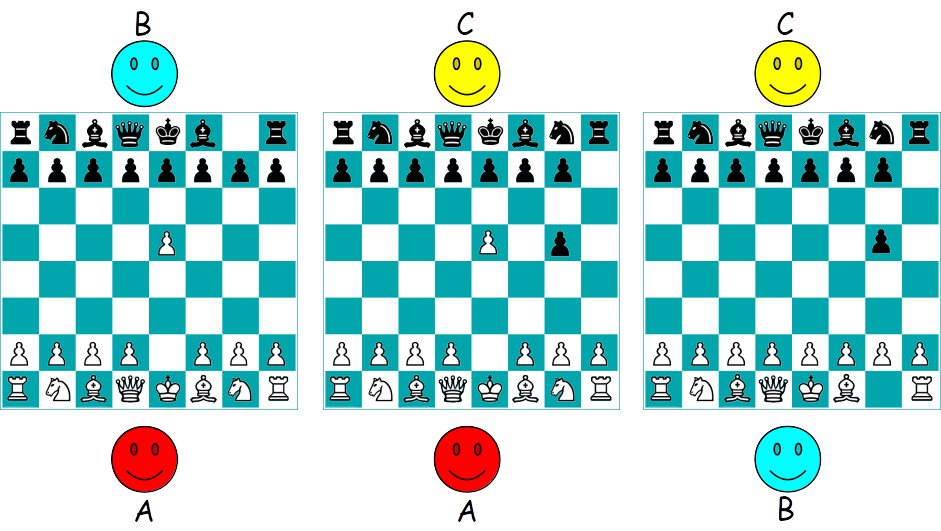 The context of this chess can be even more interesting, because increasing the dimensionality of this game we can support in this same structure matches with 4 players, performing for this the following distribution of player by board and colors of the pieces.

In this case, we have a game of chess taking place in a universe of 12 spatial dimensions. Each player has his pieces in 6 dimensions.

In general, for N players, with N> 1, the problem of playing chess in these conditions requires “N chooses 2” boards.

In the case of n players, each piece of a player will occupy 2.(n-1) dimensions. For you will be in confrontation with the n-1 other players at the same time, each on a different 2-dimensional board.

So, no matter how many friends we have, just enough boards to have fun together in a “simple” and classic chess game.