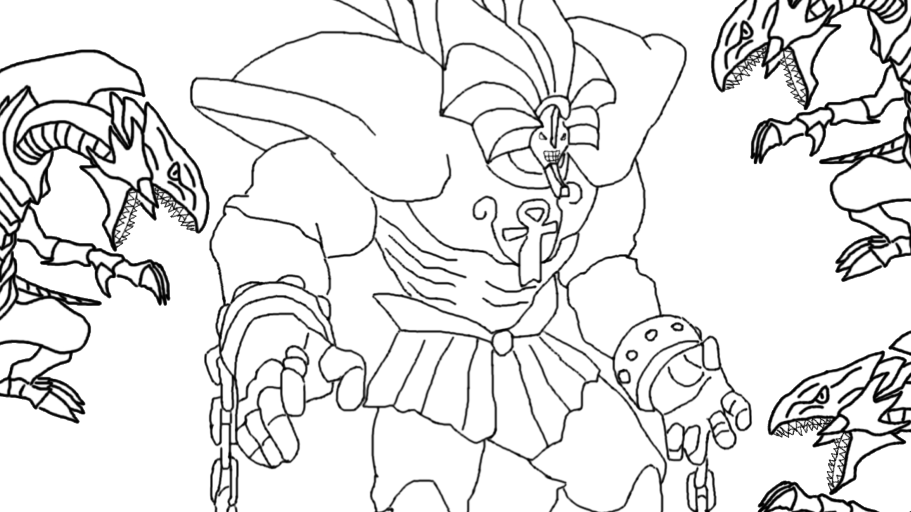 The confrontation between Yugi Muto with his Exodia and Seto Kaiba with his White Dragons with Blue Eyes in the game Duel Monsters is an epic occasion. Occurring both in Chapter 34 of the Manga Shadow Games, as well as in Episode 34 of Yu-Gi-Oh Session 0 and in Episode 1 of Yu-Gi-Oh.

For this discussion, we need to recap the rules of Duel Monsters and how the respective clash took place. In this game, each participant has a deck of 40 cards chosen by him, of which after shuffling he starts with the top 5 cards in hand, so at each start of the round, he draws a card from the top of the deck (let’s stop here). Thus, for the calculation that we hope to perform, we are clear that both players did not use other resources to obtain cards (as they exist in the game), but to draw a card from the top at the beginning of each round.

In this duel Kaiba uses the only three blue-eyed White Dragon cards, whose attack and defense make them extremely powerful, while Yugi takes a risk in a strategy that so far no player has been successful in using it, gather the 5 cards of Sealed and so invoke the Exodia. When called, the Exodia gives the player immediate victory, but the 5 cards that make it up are too weak to be used separately.

Watching the clash in the manga and in the two animes, we reduced some divergences or vague points in the duel crossing the different versions. We identified the similarities between them and determined that in the three situations the duel went on for 10 rounds for Seto Kaiba (in which he summoned the 3 White Dragons of Azusi Eyes) and for 11 rounds for Yugi Moto, ending the duel with the invocation of his Exodia , which as mentioned, guarantees the immediate victory to the player.

With this, Yugi drew 16 cards until he formed the Exodia, which is enough to calculate the chance of the 5 parts of the Sealed being in the first 16 cards from the top of his deck:

Thus, the chance of Exodia not being in any of these options (between the top 5 and 16 cards) is the conditional of the complement of each of these chances. Performing the respective calculations, we arrived that the chance of Yugi to invoke the Exodia between the 1st and the 11th move was 0,0223%. In other words, for every 4.479 players who try this strategy, only one manages to complete it by the 11th round.

On the other hand, if the Exodia is summoned, the game ends immediately, so we can ask ourselves the chance of Seto Kaiba summoning his Blue-Eyed White Dragons until the 10th round, given that Yugi Muto did not invoke the Exodia.

For it would be enough for the Exodia to be invoked at any time to interrupt the whole strategy of Seto Kaiba (as occurs in the original plot). Thus, knowing that both players drew 15 cards from the top of the decks, we can determine by a calculation analogous to the previous one, the chance of Exodia not being invoked until the 10th round:

With this, the probability of Seto Kaiba summoning 1, 2 or 3 White Dragons with Blue Eyes, can be obtained by the same procedure applied for the calculation of Yugi’s cards, multiplying the result by the chance that Exodia would not have been summoned until the 10th round , as shown below:

Just to contextualize the plot of the story a little more, in Yugi Muto’s last move, he had 4 of the 5 parts of Sealed. While Seto Kaiba had managed to summon his 3 White Dragons with Blue Eyes. In this way, we can determine the chance of Yugi summoning Exodia in the 11th play, given that Kaiba summoned up to the 10th round the 3 Blue Eyes White Dragons. That is, what are the chances of this duel ending the way it really ended: