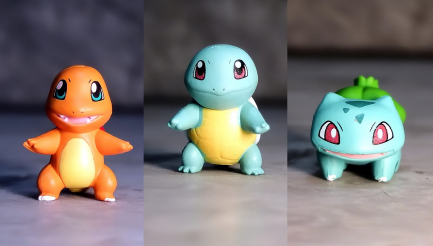 Conjectures are statements of which we cannot say whether they are true or false. Once its falsity has been demonstrated, we say that the conjecture has been refuted, on the other hand, if its validity is proved, we say that it is a theorem (or other similar names, but with lesser degrees of importance, such as corollaries, slogans, propositions …) .

In this text I present a proposal of Pokémon red version in which the player does not capture or treat them as goods (buying them in stores or in casinos). Also, do not hurt pokémons in their natural environment. In this proposal of the world, it is only possible to acquire pokémons from the adoption and train them from confrontations with other trainers. To achieve this, we use a gameshark code that prevents battles with wild pokémons, leaving only the player who chooses to escape the battles against mandatory wild pokémons1 (like the Snorlax that block two of the routes). So, faced with this world proposal, the following conjecture arises, it is possible without using more tricks to beat Elite4 and defeat our rival.

The beginning in this world is the most difficult period due to its restriction. Because just by adopting pokémons, before going through the Rock Tunnel, we will have only the Squirtle (initial pokémon of the water type, a biped turtle), the Bulbasaur (initial pokémon of the type plant and poisonous, a quadruped dinosaur with a bud in the back) or the Charmander (initial fire-type pokémon, a bipedal lizard), or their respective evolutions. In this interval we need to defeat pokémon gyms, which, although difficult depending on the type, is not as much of an obstacle as the incompatibility of pokémons with special techniques called HM.

HM are special techniques necessary for the continuation of the adventure, such as opening trails in the forest (HM01 – cut) or swimming (HM03 – surf). Altogether there are three mandatory HM to complete the game, in addition to the previous two we have the HM04 – strenght2. However, HM is not compatible with any Pokémon, there are well-defined types that can learn each HM (this can be easily consulted on specialized Pokémon websites, such as PokémonDataBase).

Thus, considering these HM as conditions to advance the game and adopt other pokémons, we can arrange all the pokémons that can be adopted from three periods of play in relation to the HM criterion: before HM01, between HM01 and HM03, after HM03. To facilitate understanding, on the next page I present a flowchart with all the Pokémon that can be adopted in each period, in which the arrows indicate the evolution of a Pokémon (Charmander evolves to Charmeleon that evolves to Charizard)3, the dotted rectangles indicate that the choice of one Pokémon in this group is exclusive with the others (we can adopt a Hitmonchan or Hitmonlee, but not both). The dotted horizontal lines indicate the need for one of the player’s Pokémon to know the respective HM to advance to the next interval (considering the top-down direction). So in the initial context no Pokémon knows any HM. To advance to the middle range, at least one Pokémon needs to know HM01, to advance to the bottom range, at least one Pokémon needs to know HM03.

1With the exception of the fight against the ghost of a Marowak in the city of Lavender, in which it is only possible to continue the game by defeating him.

3Eevee is a normal type Pokémon that, depending on the player’s wishes, can evolve into a type Pokémon: fire, water or electric. 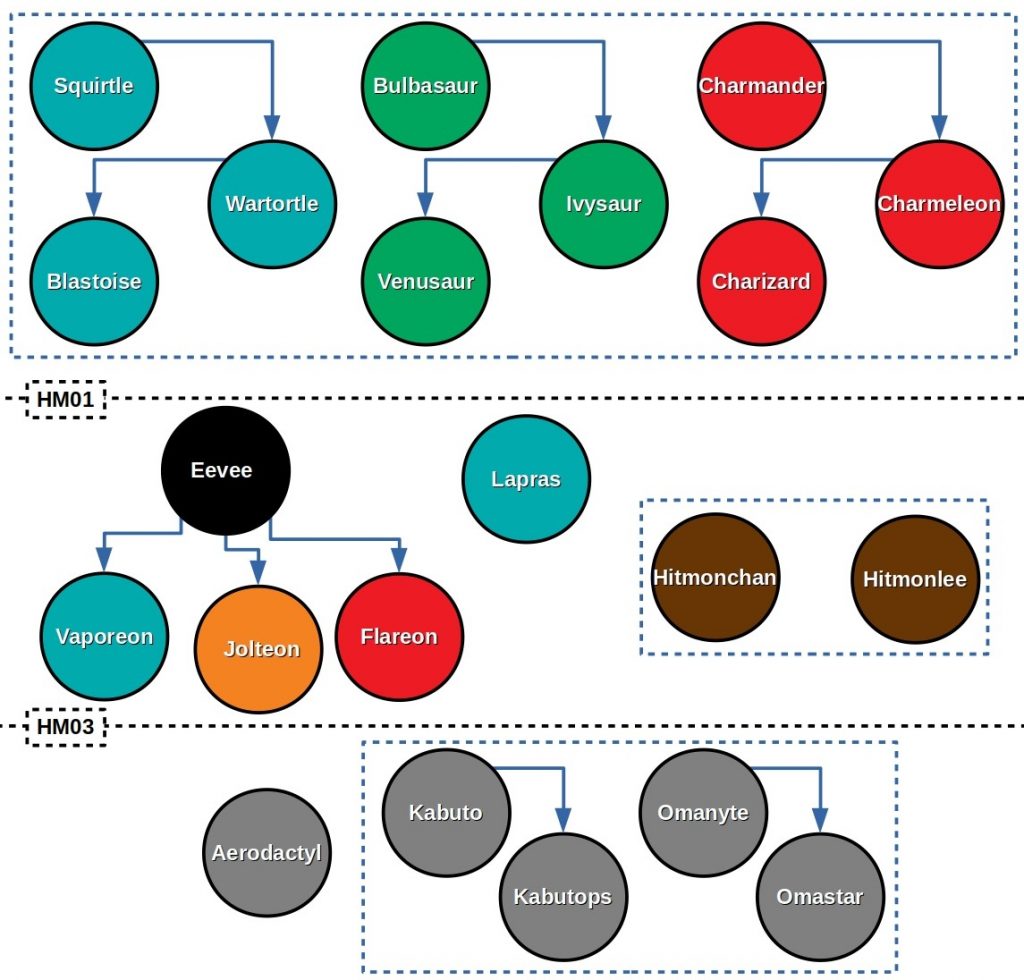 Altogether, we can have a maximum of 6 Pokémon in the adoption system, which coincides with the limit of how many we can carry in our team. Also in the count of how many pokémons we already have / we have it is possible to reach 10 pokémons, a necessary condition for acquiring the HM05 – flash (since pre-evolutions count as pokémons we have already had).

Despite this initial analysis, it is not yet clear whether our conjecture is true or false, that is, whether under these conditions and with these possibilities raised, we can in fact defeat Elite4 and our rival.

A sad news for several players who like Squirtle (initial water type Pokémon, a biped turtle), is that the game with this Pokémon becomes impossible. To state this with such certainty we need to observe the requirement of HM01, which prevents us from proceeding to the middle interval. Of all 9 possible Pokémon to have with adoption (counting their evolutions), only 6 are compatible with HM01, Bulbasaur, Ivysaur, Venusaur, Charmander, Charmeleon, Charizard1. Exclusionary options in case we choose Squirtle as initial pokémon.

With the impossibility of choosing Squirtle, we need to stick to the requirement of HM03, because of the 13 pokémons possible to obtain with the adoption (we already disregard Squirtle and its evolutions), two of them are compatible with HM03, Lapras and Vaporeon. Thus, as we need at least one that is compatible, this condition is satisfied by Lapras regardless of how the player decides to evolve his Eevee.

Thus, it is apparently possible to win starting with both Bulbasaur and Charmander. Only theories and criteria were enough to show that it is impossible to start with Squirtle and win, but in mathematics to prove that something exists, we need to find at least one case in which this occurs. So, I recorded myself playing in both situations (starting with Bulbasaur / Charmander) until I finished the objective. The videos can be found on YouTube as shown below and were played at 5x increased speed (together they add up to almost 7 ½ hours of play).

1In fact of all 21 possible Pokémon to have throughout the game with adoption, only these 6 are compatible with HM01.