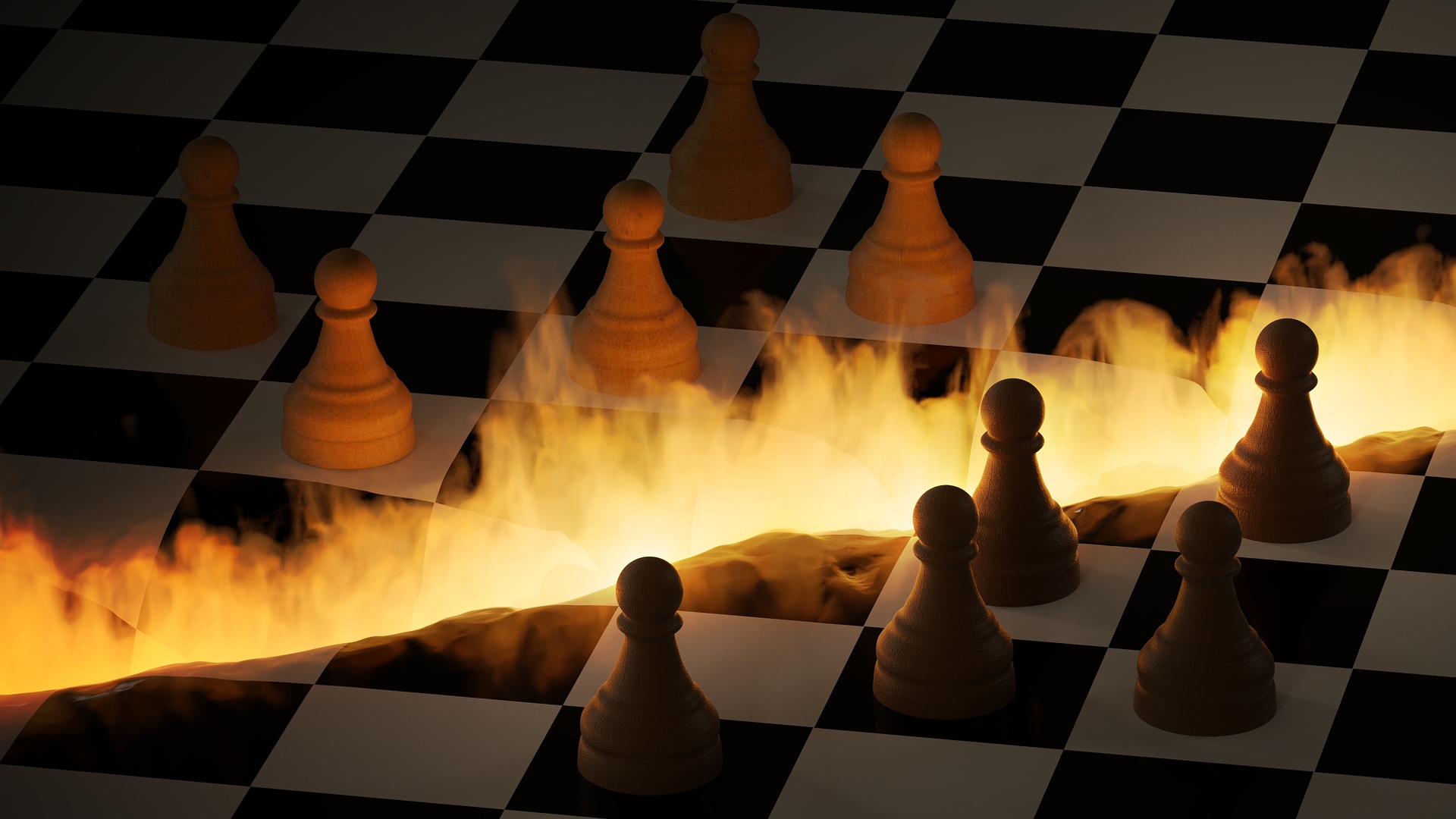 This is a game strategy that is sometimes seen as chaotic or that leads to nothing. When the player seems more concerned with damaging the game of others, than with winning. Apparently, these players just want to see the world go up in flames, but there is a clear goal to it, and it may not be defeat.

Although the term play is quite broad and covers many natures, I will work here with games within the standard of Game Theory of mathematics, so we deal with non-collaborative competitions of which there is explicitly a winner. We also assume that all parties are completely rational and make exactly the best possible moves.

In such cases, the act of gambling would be an investment in your own goals, in order to achieve a success that satisfies the condition to obtain victory. Although the presence and the effect of the other actors in this undertaking are clear, this is not perceived, since, in this sense, each one alone seeks to achieve victory. Concerns about preventing other players from winning only apply when they are recognized as potential winners. Otherwise, the strategy remains to advance its own goal. Although during normal play, we may find that one game harms others. This is not its main objective or is only deliberately adopted when players recognize themselves to be threatened by others.

Although players, when they perceive the threatened victory, invest in harming the opponent, this would not fit as an anti-game. It would be more like a relationship of mutual benefit to prevent the victory of the other (the enemy of my enemy is my friend), any player who saw his victory threatened would turn against the probable winner in an attempt to hold him and increase the dispute. In this way, the concept of anti-gambling differs from advancing through your own effort throughout this race. The idea would involve investing in the maximum loss for all other players, so that it weakens them so much that they never become threats. Thus, their actions would not have the objective of winning, but that of causing maximum damage to other players.

An example can be in chess, once we realize our defeat, we start a strategy of trying to tie. Of course, we are not looking for a draw when we still believe we can win. We don’t start a game to draw and while we calculate the possible win, we avoid it. Anti-game, in this case, can be the strategy of looking for a tie from the first move, seeking in any way to stop the game or put it in a repetitive cycle.

Although, apparently, the player using the anti-game does not want to win and is content with just a draw. Once the other player sees himself as a potential winner, he will refuse to tie, opting for bad moves just to avoid the cyclical condition that would lead to an unwanted tie.

Thus, the anti-player starts from the premise that the other player will not buy his “bet”. For if both parties adopt the anti-gambling stance, this strategy would not work, since there would be neither side trying to compensate for the damage caused by this strategy. So, for anti-gambling to work, it is explicitly necessary for other players to believe in their winning potential and play by investing in their own goals. If all players invested in the anti-game against each other, we would reach a situation of mutual exclusion, leaving the criterion of victory practically at random.

In the example above, we have a situation in which the only way to “unlock” the game is to sacrifice a queen. In this context, both players know that if no one sacrifices the queen, the game ends in a draw. If the tie is not enough for one of them, but it is for the other, the latter will feel obliged to lose the queen to continue the game, although this means bearing a very big loss for the rest of the game. However the tie may not be the intention of any of the players, but the first one who makes the decision to unlock it, will find himself at a loss. This is a hypothetical scenario, but the anti-game follows the same principle, in which the anti-player puts the opponent in front of the obligation to bear losses that will influence the rest of the game.

Another example of anti-gambling can be seen at Texas Poker. In the situation of the first round, as soon as the game begins, when all players are dedicated to playing. A player, without looking at his cards, announces All Win. Of course, all players will be in a position of doubt, because as everyone has the same amount of chips, accepting this action can lead to immediate defeat. By not seeing the cards themselves, the player who used the anti-game becomes shielded about expressing himself about his own playing condition. Everything revolves around the following question:

Do we want to end the game in the first round?

Or even in the perception that players feel they have the potential to win if they play for multiple turns with stakes in regular amounts. Such a strategy is extremely risky, but it depends heavily on the premise that if other players consider themselves potential winners, they will refuse to participate in this suicide move in the first round. The consequence of this is the advantage in the first round for the player who used the anti-game.

Another example occurred when playing Ticket Ride. In it, we need to build railroads that connect our cities. While all the players watched their paths, tried to build their railroads and fulfill their objectives, I was concerned with identifying the most sensitive points on each other’s routes and building a small section on them that would make them deviate a lot. Of course, I wasted part of my movements to weaken them, but the mutual damage generated was greater than my individual sacrifice. So, throughout the game I was weakening my opponents and when that was not feasible (that is, when what would hurt me would be equal to or greater than the injury to other players) I was advancing on my own goal.

In another context, playing Boss Monsters, a board game in which we control a video game boss and we need to build dungeons that attract the heroes there, with enough strength to defeat them and collect their souls. While the initial strategy is to build your dungeons, strengthen them and collect souls from the heroes, an anti-game that I use a lot is to focus on the immediate attack against other players. So I don’t attract any heroes to my dungeon and I use them as much as possible to damage my opponents’ dungeons. Since they find it difficult to grow and thrive in their dungeon, the dangers throughout the game cannot be resolved so easily, requiring a constant effort not to be eliminated. Something that wouldn’t happen so easily if I allowed players to grow and prosper until one of them became a player with a clear winning potential.

Following this same strategy, I present another example with the Catan game. Instead of worrying about building my villages and cities, I worried about disturbing my opponents’ buildings, blocking their paths for expansion as quickly as possible. This resulted in increased spending on resources to correct the moves I made against them. As a result, I was able to grow without the interference of the other players who were trapped by my blocks, allowing me to take more privileged positions and acquire more resources, despite the initial expenses directed only at the loss to the other players, instead of rushing to victory immediately.

As a rule, the anti-player assumes that the damage suffered in his damaging actions will be less than that suffered by the other players together, as they seek victory. In this way, they will not give up on account of this harmful action, and for this very reason, they will bear their loss.

This idea of ​​anti-game appears very well in the anime No Game No Life, in which the protagonists claim that they can play with their own strength or using the opponent’s strength against them. In one situation, Sora and Shiro (the two protagonists) are playing a game in the virtual world about words and materialization. Each player has 30 seconds to say a word that has not yet been said; the word must be something real; if it does not exist, it exists and, if it exists, it ceases to exist. The words can be of any language and in the first move, the protagonist Sora says “Hydrogen Bomb”.

When Jibril (her opponent) became curious about the object of another world that materialized, she realized that this was an immediate threat to everyone, she immediately used a word that represents a supreme protection of that world, protecting herself and protecting the protagonists from the effect of nuclear explosion. She then states that she was kind enough to want to save them too and not end the game on the first move. But the protagonist Sora says that he bet on it, that she would be very curious about the other world (from which the protagonists came), and would not like to win so easily in the first move. With that, the protagonist forced his opponent to spend the word that meant the most powerful protection of this universe. A great example of anti-gambling, as with a single “apparently suicidal” action, Jibril bought the bet and spent the defense asset against the following attacks.

To conclude, anti-gambling is an extremely risky strategy, but it offers the player who uses it an advantage over others. Since other players want to achieve victory, or believe they can achieve it, they will choose to invest in their own efforts to achieve it, and that is the premise that benefits an anti-player.