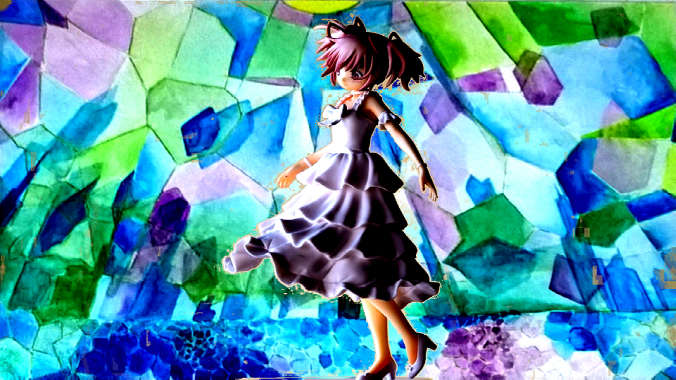 Puella Magi Madoka Magica, simply referred to as Madoka Magi, is an anime series that aired in 2011. The plot follows a group of Common High School Girls who choose to become Mahou Shoujo (Magic Girls), in order to battle against the so-called Witches. Consequently, they learn about the bad side of being a Mahou Shoujo (Magic Girl) … Because as time goes by or they use their powers, they fill up with impurities and the only way to cleanse themselves is with the soul taken from a Witch. For if you let these impurities consume you, they themselves will become Witches. Just to complete the storyline, Witches create Familiars that grow up to become Witches.

For the continuation of the discussion, we will establish an order with which things happen in its plot.

In the 0th period, the Ordinary Girl follows her ordinary life before becoming a Mahou Shoujo (Magical Girl).

In the 1st period, the Common Girl turns into a Mahou Shoujo and goes on to hunt witches.

In the 2nd period, the Mahou Shoujo failed to purify herself and became the Witch1. Witch1 has the power to create / maintain Familiar1.

In the 3rd period, Familiar1 has grown to become Witch2 with the power to create Familiar2, Witch1 free from her relative (who became Witch2) can now create Familiar3.

In the anime it is not defined the number of times that a Witch’s booty can be used to clean the impurities of a Mahou Shoujo. Another aspect to be observed concerns the battles that wear them out may have their origin in confrontations against Witches, but also against the Familiars of Witches. But unlike Witches, Familiars do not give spoils, so hunting them only causes harm to the Mahou Shoujo (so much so that some refuse to hunt Familiars). However, if the Witch who created a Familiar (in case he has not yet become a Witch) is destroyed, the Familiar is also destroyed. Based on these facts, we can continue the discussion by explaining what the prey-predator system is.

Prey-predator system, also known as Lotka-Volterra equations, are two first-order nonlinear differential equations often used to describe the population dynamics of two interacting species: one as a prey and the other as a predator. In these models, it is assumed that the only source of food for predatory species is prey populations and that there is no competition between individuals of the same species. These equations received this name in reference to the mathematician Vito Volterra and the biophysicist Alfred J. Lotka, who published in 1925 two completely different studies (since they were not known), but in both they used these same equations in an unprecedented way. They represent the first model that tries to understand the relationship between two species (prey and predator), which despite not describing a complete relationship of these beings in the environment, as it does not consider other factors than the population density of the species, it is about facilitating compression and support the elaboration of more complex models. Several relationships in prey and predator systems can be expressed from this model, including:

Due to this prey / predator relationship, we can have the following final situations:

3. Coexistence of predators and prey.

In the context of Madoka Magi, we need the following information for each time period as presented in the Witches’ growth tree.

A) Number of Common Girls who are converted to Mahou Shoujo during that period (+ Mahou / period);

B) Number of Witches that a Mahou Shoujo can eliminate (prey / period);

C) The number of times that the same Witch booty can be used to remove the impurities from Mahou Shoujo (Purification);

With this information and assuming that the Mahou Shoujo are not defeats by the Witches. Thus, for Yi initial Witches and X Mahou Shoujo able to hunt up to each Witch. We will have at the end of the first period:

We will call Yf the amount of Witches that survive the entire period. This number will be doubled in the following period, when Yi will take over.

To facilitate the interpretation of these data, I represent them below in a graph with entries up to the 40th period. In it, the horizontal axis is the periods and the vertical is the quantity of each species (Mahou Shoujo and Witches). 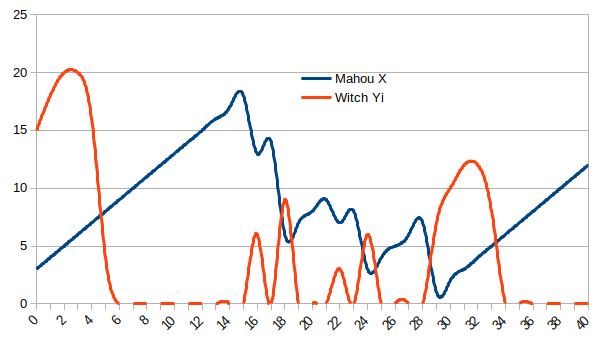 Now a slightly different situation, in which the initial number of Witches, which used to be 15, changed to 16:

Notice the change in the result that continues until the 15th period. What was previously reduced now maintains stable growth beyond the control of the Mahou Shoujo. The influence of a single Witch the most unbalanced the system. To facilitate the reading of these data, I represent them in a graph in which the horizontal axis is the periods, and the vertical the quantity of each one (Mahou Shoujo and Witches). 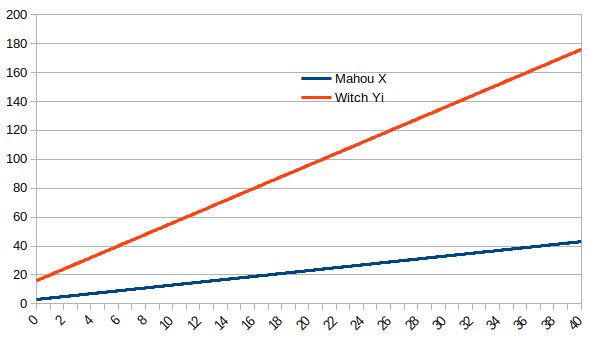 With this analysis, we can see how the context of the anime Puella Magi Madoka Magica fits into the Prey-Predator system initially proposed by the Lotka-Volterra equations, whose systems that allow coexistence between species present results similar to the graph on the previous page. In the graphic on this page, however, the population of Witches is beyond the control of the Mahou Shoujo. This in the context of anime would lead to the obliteration of our world, since Witches cause harm to human beings.

I am grateful to my friend Alisson Almeida Bueno for his support in calculations and discussions regarding Puella Magi Madoka Magica (which he recommended to watch).

I thank my wife Adelle Marques Trevisan, for the drawing I used as a background for the cover of this post.