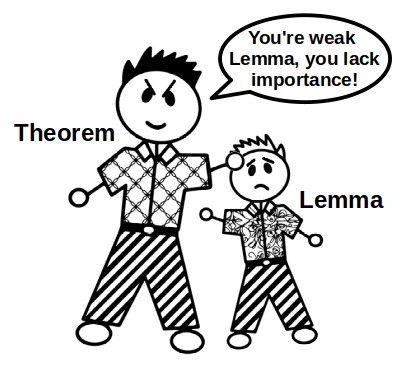 In mathematics we often hear that something is a Corollary, something else is a Lemma, that is a Proposition, there is a Theorem … We also have terms such as Rules, Laws, Properties, but these seem to have their general meanings for clearer results, for example: Sum of Derivatives Rule … is a result related to the sum operation with derivatives; Law of Sines … is a result that determines for any triangle, the relation of the sine of an angle is always proportional to the measure of the opposite side to that angle; Distributive property of multiplication … is a result that guarantees a(b + c) = ab + cd.

So, let’s focus on the 4 terms with the most obscure meanings (Corollary, Lemma, Proposition, Theorem), what are these names anyway? Let’s start by looking at the dictionary.

Corollary: proposition that derives, in a deductive chain, from a preceding assertion, producing an increase of knowledge through the explanation of aspects that, in the previous statement, remained latent or obscure;

Lemma: preliminary proposal whose prior demonstration is necessary to demonstrate the main thesis that is intended to be established;

Theorem: proposition that can be demonstrated through a logical process.

You may have noticed what they look like. And in fact there is a reason for that, these terms are all Tautologies. We will consult in the dictionary what a Tautology is.

Tautology: analytical proposition that always remains true, since the attribute is a repetition of the subject.

In fact, Corollaries, Lemmas, Propositions and Theorems, are all Tautologies, that is, sentences whose veracity has been proved in a deductive way. Their differences revolve more around the uses, in this case, the most important results are called Theorems. The less important results, but necessary beforehand to prove a theorem, are called Lemmas. The results obtained directly from a previous result (either a Lemma or a Theorem), are called Corollaries. And Propositions are generally used to describe results of little importance, which are not direct consequences and are not used to demonstrate a Theorem. I drafted these ideas to facilitate understanding.

However, this is more a convention than a rule. To say that a result is a Theorem, Corollary, Proposition, Lemma, Rule, Property, Law … is to say that this result was demonstrated in a deductive way based on an adopted axiomatic system. In terms of tautologies, they are all the same. But in terms of social prestige, theorems are superior! And so I justify the cover image of this post, which makes reference to a meme about the anime Naruto, in which Itachi, Sasuke’s brother, defeats and scolds him, saying that he is weak because he lacks hatred! In this case, a theorem is rebuking a lemma, saying that it is weak, because it lacks importance …