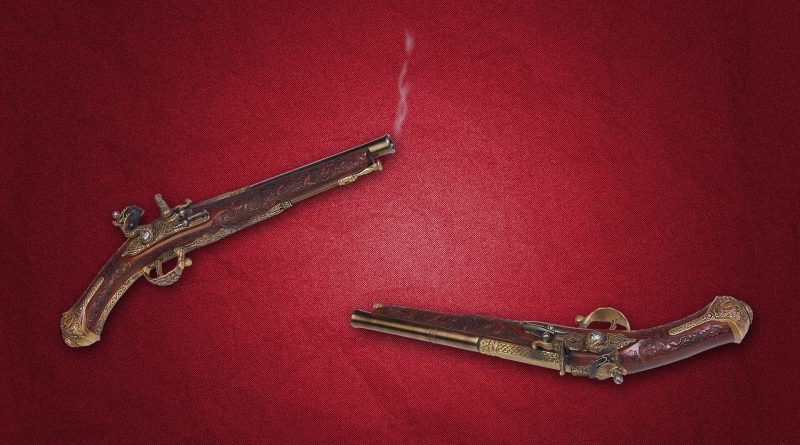 In 1890 there was a devastating winter in the province of Gévaudan in south-central France, which led eight travelers (Alberto, Bruno, Cássio, Diego, Eduardo, Francisco, Gabriel and Henrique) to seek shelter in a small abandoned fort in the Margeride mountains. Everyone traveled alone and did not know each other until now. Arriving at the site, they quickly mobilized to light firewood and find supplies, which, out of curiosity, were well maintained despite the fact that the site had signs that it had been attacked.

Stabilized by the blizzard, they went to rest, but on the first night, Henrique was attacked and disappeared, leaving pieces of his body in the place, looking like a big animal like a bear had devoured him.

The remaining seven locked the entire fort and searched with weapons for the hidden animal. The fort was not big enough for that creature to be able to hide, being the most likely hypothesis of a bear that woke up from its imbernation and after the attack returned to the forest.

However, the next night Gabriel was killed by what appeared to be the same creature, they immediately looked for openings in the fort, where she could have entered, but confirmed that the whole place was closed and that the animal was not inside. This led to a terrible conclusion that one of the six was responsible for the deaths.

Mutual distrust led everyone to seek protection from others, but that night there was a shot and Francisco was killed. His lacerated body was in place, and the gun still held in his hand, seemed to have shot into the ground.

Fear followed, everyone tried to protect themselves without trusting anyone but also unable to leave the fort in the midst of the blizzard. The next night the five travelers went to sleep with their weapons ready, but that was no use, they heard a shot and Eduardo was killed, his body full of wounds was in place and the gun still held in his hand, seemed to have shot against the wall.

The next morning, Alberto called the rest to the salon where he presented four cases with pairs of pistols. He said that they were all loaded and that they needed to put an end to that dilemma before the Beast killed everyone. So, since no one there could really prove his innocence, it would be more than fair that we would vote by pointing the pistols at two suspects of being the Beast, and so we would execute the most voted one.

After the vote, it was decided that Cassio would be executed.

So Diego, without changing his aim, pulls his two triggers. Then dropping the weapons and advancing towards Alberto.

Diego‘s body was beginning to change, his arms were growing, his face was elongated like a wolf’s muzzle with his teeth protruding from his mouth and his eyes changed to a blood red color.

Alberto found himself totally paralyzed in the face of that situation, unable to speak or move his arms to point the weapons in the direction of the Beast, who said in a voice that smelled of death and seemed to come from the depths:

Sed quid humana infortunii, si satis esset in suffragium mihi in meus exitium
(in Latin it means: What a human misfortune, one vote would be enough if I against myself, for my ruin)

The creature approached Alberto, when Cássio unharmed, surprises him by firing with two pistols at close range, knocking him over. Alberto and Cássio shoot more times at the Beast and then burn it. After eliminating the creature, they bury Bruno who died at the moment when the Beast in the form of Diego, shot.

This is a fictional tale based on the story of the Beast of Gévaudan, who was supposedly killed by a blessed silver bullet, which came to be incorporated into the Greek myth of the Werewolf. However, the idea for this dynamic of votes came from the social deduction game known as “Werewolf” (or “Mafia“, “Assassin“, “Sleeping City“), proposed by Dimitry Davidoff in 1986.

Although there are many variations, their conflict has traditionally been centered on an informed minority (the Werewolves), against an uninformed majority (the Villagers). These roles (Werewolves and Villagers) are secretly assigned to players at the beginning of the game, each Villager knows only his own role, and the Werewolves know each other. Thus, during the night, the Werewolves attack the Villagers, and during the day both groups (Villagers and Werewolves) get together to vote for whom they consider to be suspects, and if someone receives the majority of the votes, they are eliminated. The Villagers ‘goal is for all Werewolves to be eliminated, while the Werewolves‘ goal is for the number of Villagers and Werewolves to be equal (thus ensuring that there will be no majority of votes against them).

In this story, the pistol voting system was inspired by the variation of the game known as “Werewolf Uncertainty”, proposed by the Brazilian Luis Fernando Dorelli de Abreu, as a challenge for the International University Programming Contest (International Collegiate Programming Contest), at the Regional Latin America in 2016. In it we have only one player in the role of Werewolf, while everyone else plays the role of Villagers. The game starts with all players accusing two suspects, and then at the end of those choices, the Werewolf reveals himself. At this point, all Villagers can choose between the two they initially accused, which one will be their vote. Finally, the Werewolf can choose between the two he initially accused, for which one his vote will be. If the Werewolf receives a majority of the votes, he loses. If the Werewolf receives an equal or lesser amount of votes than another Villager, he wins.

To make some points clear, the Beast (or the Werewolf) in this tale was able to paralyze a target almost completely, so that even armed people, when attacked, were able to move at the maximum enough to pull the trigger, being unable to aim at the target. target.

The Beast knew that if it had three weapons aimed at it, it could shoot two people and use its power to paralyze the third. But that would not be enough to stop her from pulling the trigger. That is why she is certain to win the moment she realizes that there are only two weapons aimed at her.

Alberto knew that the behavior of the Beast would be independent of the vote, she would shoot two travelers, giving preference to those who aimed at her. If the Beast was not the most voted (received 0, 1 or 2 votes), it would perceive victory in that situation, shooting two of the travelers and paralyzing the third. If the Beast was the most voted (received 3 votes), she would know that she would be executed, in any case she would shoot two of the travelers and try to paralyze the third before he fired at her.

However, the Beast‘s failure was to take Alberto‘s initial claim that all weapons were loaded as truth. Therefore, Alberto carried only one weapon from each of the pairs distributed in the cases. The moment the Beast found itself in victory (based on an initial premise that was false), it fired with both pistols, believing it had eliminated Bruno and Cassio who aimed at it. But in reality, only one of the two was killed, while the other remained unharmed, free from the creature’s paralyzing power, with one of the two weapons loaded and certainty about its target.