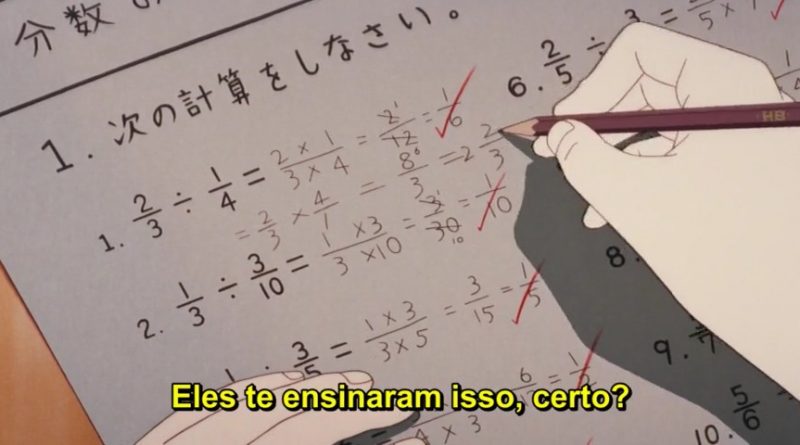 In the previous post I narrated a little about the relationship of the character Taeko Okajima with the mathematics, from the 1991 anime Omoide Poro Poro (Only Yesterday) (you can access it by clicking here Taeko Okajima’s difficulty with fraction division: part 1). We’ll continue this discussion of Taeko’s doubt regarding the association of multiplying with increasing, and dividing with decreasing.

Multiply, according to the Michaelis Portuguese language dictionary, means:

Of the 7 meanings pointed out by the dictionary, in 5 of them we have the idea that quantities are increasing.

To divide, according to the Portuguese language Michaelis dictionary, means:

Of the 13 meanings pointed out by the dictionary, in 12 of them we have the idea that parts are separated, having an even broader meaning than the word Multiply.

In this relation of meanings, it is rather imprudent to say that “Multiply” is the opposite of “Divide”.

Thus, in the anime Omoide Poro Poro (Only Yesterday), the character Takeo presented the idea that Multiplying is about increasing quantities, while Dividing is about decreasing quantities. Questioning your sister Yaeko about how it was possible to divide 2/3 of an apple by 1/4, and thus get more than the apple itself?

The character’s doubt is really centered on the fact that we share the words of Mathematics with those of the common language. As in the meme below that plays with the expression normalize with the sense of normalize in mathematics which means “pass the norm”:

Jokes aside, when we focus on the meaning of some words in Mathematics that also exist in common language, it is natural that their meanings need to be “well defined”, otherwise we make room for the subjectivity of the language.

Thus, the role of a definition is to describe a certain mathematical object unequivocally within the set to which it belongs. For example, I can describe multiplication. between the Natural numbers X and Y as:

X.Y is the operation that adds to 0 the number X by Y times.

See how much more complicated it was to define the multiplication now that we have positive and negative values ​​involved, in this case, we could take advantage of the definition of the multiplication of the Natural numbers. at the time of performing these operations. Note that the advantage of this more complicated definition is that it does not allow room for subjectivity or ambiguous interpretations.

Now let’s define the # multiplication between Rational numbers written as C/D and E/F where C, D, E and F are Integers, and D and F are different from 0 (let’s use * to say it’s the multiplication defined for Integer numbers).

Note that although when we talk about Rational numbers, we are representing them with the sign of division / applied to the integers C, D, E and F. However, when we are talking about division of Rational numbers, we are representing it with the sign [ ], which refers to the operation as we define it, which uses only the Integer multiplication definition.

In fact, the multiplicity of meanings in the common language can be a confusing factor when expressing ourselves, demanding that the word be interpreted within its context and intentions of the one who uses it for the one who receives it. Precisely to avoid an ambiguous interpretation, which is so common in mathematics, we start with definitions. Making it clear to those who read how each “object” we are naming works.

Let’s stop here, but the discussion continues in the next post: Taeko Okajima’s difficulty with fraction division: part 3