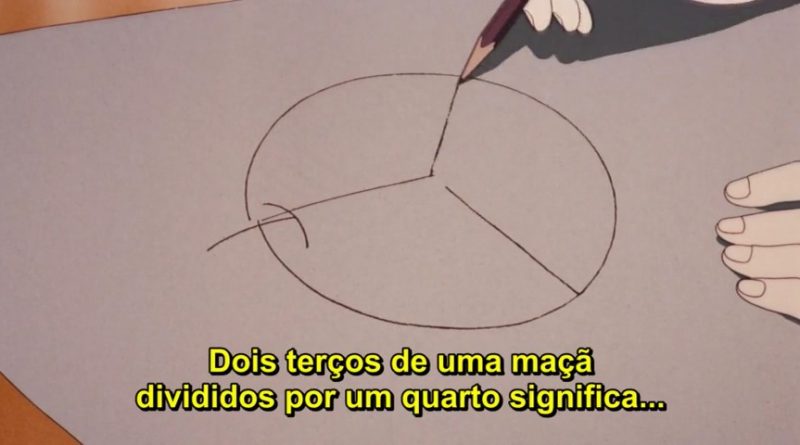 In previous posts I narrated a little about the relationship of the character Taeko Okajima from the 1991 anime Omoide Poro Poro (Only Yesterday) (you can access it by clicking here part 1) and the importance of mathematical definitions in the process of avoiding ambiguity and subjectivity present in the common language (part 2). We will continue this discussion of Taeko’s doubt regarding the sense of dividing by (1/4).

The character (Taeko) after hearing from her sister about how to use the “rule to divide fractions”, questions her about the sense of dividing two parts of an apple divided into 3 parts, for (1/4).

Taeko’s difficulty is misinterpreted by her sister Yaeko, who considers her unable to understand that she should “invert the fraction” before “multiplying”, given that the results presented by Taeko were equivalent to multiplying fractions, not dividing fractions.

If the anime scene had stopped there, it would have been a full plate for discussion, but it continues, showing Yaeko in an initial attempt to show Taeko in the apple example, how that “division” occurs. Yaeko takes the paper and pencil, but when faced with the task of “dividing” those (2/3) of the apple to (1/4), she hesitates and finds herself not knowing how to proceed, telling Taeko to forget about the apples , and just make the rule you had taught.

The fact that Yaeko hesitated when showing how to divide the 2/3 of the apple to 1/4 reveals a very common scenario in math classes, the focus on finding the right answers without a real concern to understand the path that led up to that answer. Yaeko in the anime is older than Taeko, so for her this content was already considered “outdated”, as she saw it in previous years, even managing to easily perform operations. However, when asked about the meaning of that operation, Yaeko shows that there were gaps in her learning, revealing that in fact she, despite having been considered in that education system, as successful in the subject of mathematics and, so to speak, capable of dividing fractions. Yaeko really didn’t understand what that operation meant.

To illustrate an explanation of this problem, let’s start by imagining the physiology of fractional people a bit.

The same goes for earring sets (for whole people, pairs), if half a person receives one set of earrings, they feel that they actually received 2 sets of earrings.

Thus, if we divide 2/3 of an apple to a half person, he will think he is getting 4/3 of an apple (because in his worldview, our whole apples are actually two half apples).

The same reasoning goes for 1/4 of people. Every 1/4 of people sees the entire world as quadrupled 1/4 universe units.

In terms of operations, it is as if 1/n fractional people saw the whole world as a set of n units of those same elements of the 1/n universe.

In this sense, when Taeko asks how to divide 2/3 of an apple to 1/4 of people, we could explain to her from the example of pairs of socks for people in the universe 1/2. Then follow the comparison for people from the 1/4 universe, and continue with other fractional universes to generalize the concept

Let’s stop here, but the discussion continues in the next post: Taeko Okajima’s difficulty with fraction division: part 4