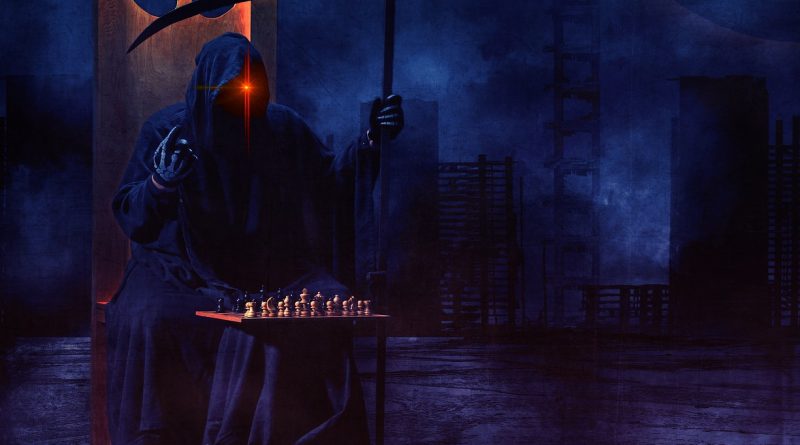 In the early 70’s when the popularity of chess was on the rise in the world, a rumor emerged among the main representatives of the category involving a dark challenge. To access it there were several requirements, such as taking an elevator in a building located on the corner of two streets with the names of Catholic saints, but in order to prevent more people from submitting to this danger, we omit here the other steps necessary for this.

It is not known for sure how this rumor came about, nor who spread it so accurately among so many nations, but several professional chess players were tempted to participate. Although the rumor was taken lightly by some groups, all those who took the steps to access this dark challenge were never seen again. At the time, due to the Cold War conflict, the most skeptical attributed these disappearances to the intelligence agencies of the great nations.

But the rumor reached a very old amateur player who had never stood out enough to be recognized, but during his career he gave a lot of work to great chess masters due to his ability to put himself in extremely high risk situations. This characteristic made him known within the community as the Hanged Man. This player had lost contact with some excellent players he was friends with who went after the challenge of darkness, tempted to find out more about it, it was the same to follow the instructions of the rumor to access it.

The Hanged Man was in the elevator of the building when he finished all the procedures that the supposed arcane ritual required, at the time came a feeling of disappointment when he realized that everything was still the same, he had not been transported anywhere, nor had anything happened. For a moment, feeling annoyed for having believed it, when the elevator door opens and he finds himself on a completely empty, dark floor. A few feet from the elevator door, there was a mounted chessboard and a shadowy entity sitting beside it.

In a panic all the man’s courage was gone, and he wanted to get out of there. Pressing for the elevator to change floors, but despite the door closing, the elevator remained stopped until the door opened again and revealed that same floor. The Hanged Man, realizing that he had actually accessed the challenge of the dark, regrets that, but feels there is no going back, so with shaky legs he goes to that entity that greets him by the name of the Hanged Man, saying that his fame was recognized even there, in the limits of the abyss.

The frightened man is sorry, saying that he was sorry to have tried that, that he would like to leave. But the entity says that was not possible, that they were now in a bubble between the abyss and their reality, and the only way to break that bubble is to defeat it in a match. The Hanged Man then realizes why his teammates and other chess players never returned from the challenge, they must have lost the match, but with a trembling voice and scared to death, he asks that obscure being in front of him, what would happen if he lost the game . And the being replied that absolutely nothing, that he could dispute with her as many times as he wanted. The Hanged Man then started to play, he was very scared. Right on the first move, the entity said:

Then there is a kind of whistle coming from the board and a piece moves.

The Hanged Man asked what “Non curat” meant, and immediately there is another whistle coming from the board and a piece on his side moves. The creature then explained that it was a Latin expression, which meant “I don’t care”, saying it was a command to make a random move, a small convenience for moments of indecision, such as the first move in the game.

After the very polite and cordial explanation, the Hanged Man seems to have understood why the creature didn’t mind a few simple moves, since his skill in the game was absurd. In a few plays he had his game all ruined, being defeated. After the defeat, the Hanged Man expected some punishment, but nothing happened, that entity just thanked the game and proposed to arrange the pieces for them to play again.

The Hanged Man, surprised by the warmth and kindness, began to play again and again. Trying different strategies, suicidal moves and every kind of trick you know to get an advantage against your fabulous opponent. After many matches, some clashes more balanced than the others, for the first time the Hanged Man saw himself in the domain. Controlling the game, he began to see some possibilities for victory, when he felt a chill down his spine, that there was something wrong with all that. He looked at the board and thought about the game for a long time, carefully observing all the possible movements of all the remaining pieces, thinking about what was strange, what he was missing. Then, after almost half an hour watching that game, he realized one obvious thing, that he wasn’t really a good chess player compared to his colleagues who disappeared in that same dark challenge.

Did this realization of your own limitation make you wonder why the other players didn’t come back from this challenge? Each must have placed themselves in the same situation as him, repeatedly playing against this obscure opponent. Would they still be playing today, stuck in this endless losing streak?

Not! For if that were so, he, a simple amateur player like him, would never have come so close to victory. There was something strange about that, maybe these players didn’t have the humility to realize that the real trap is not to be defeated over and over again, but to believe that the victory on the board would be their victory.

The Hanged Man then took a breath, and started looking at the game for a longer time, in his perception it seems to have spent about two hours looking at those pieces before starting what would be his final sequence of moves. After this long reflection, he began his calculated streak and needed moves. Between each move, he reflected coldly for a long time, as the entity he was playing against, despite always making his moves instantly, seemed not to care how long his opponent took to play. Then, move after move, he carved out his victory, reaching his penultimate move, in which the Hanged Man (with black pieces) was in check.

The Hanged Man, happy with the situation, thanked the creature for the game they played as he got up without making his last move. Going to the elevator, after entering, wait for the door to close and then close and then, from inside the elevator, he speaks loudly:

Soon after, there is a small whistle and after a few moments the elevator door opens, but now on an ordinary floor of the building. Relieved of having escaped that game, his legs were shaky, he was in a cold sweat and his heart was pounding, he left the elevator straight to the floor, gathering his strength, leaned against the wall and went down almost crawling through all the other floors of stairs, immediately leaving that one place and sitting in the distance to catch your breath. He never got on an elevator again or played chess for the years he lived, whenever someone mentioned a game of chess, he felt a supernatural horror to think of the fate of his colleagues who, in their thirst for victory, burst the bubble without being there before. still inside the abyss.

This is a fictional tale based on the 7th arc of Doctor Who season 3 (classic series), “The Celestial Toymaker” which aired in 1966. In this story, the Doctor’s ship will land in a universe controlled by the creature known as the Celestial Toymaker (a kind of cosmic deity). The creature says that the only way for the Doctor to escape from there is by solving the Towers of Hanoi challenge in the least number of moves. As the Doctor resolves, the creature gives some commands for the game to advance a few moves. At the end of the arc, there was only one piece left for the Doctor to win, and he realized a problem.

The moment he moved the last piece, that Celestial Toymaker universe would fall apart, and the Doctor would be trapped in the void. The only way to escape safely was to be on your ship before the universe fell apart, but the ship would also not be able to move until the game was over. The solution found by the Doctor was to imitate the voice of the Celestial Toymaker and from inside his ship, give the game the command to move the last remaining piece. With that, the creature’s universe was undone while the Doctor remained safe in his ship ready to escape.

In the case of this tale, the command “Non curat” caused any piece on its side of the board to be moved. This information given by the entity in its first move, was the key for the challengers to escape. In this case, the Hanged Man conducted the game so that he had only one possible move left, and that move resulted in the opponent’s checkmate. Thus, when activating the command “Non curat” the only piece that could move would be its Black Bishop, blocking the threat of the White Tower, and resulting in checkmate to the White King.

So, despite the player not seeing the final move (because he was already in the elevator with the doors closed), this led to victory and consequently with the abyss bubble being burst with the Hanged Man out of the abyss.