It was scheduled for September 20, 2019 the Invasion of Area 51 running in the Naruto style, with more than 2 million confirmed. This incident raised concerns among the authorities and expectations about what could happen if confirmed people actually tried this. In this text we will discuss how the use of the logarithm could have made Invasion of Area 51 viable.

To place ourselves in this text, we must first keep in mind that:

1) Area 51 is a USA (secret) military base often associated with hiding various secrets from humanity, such as the discovery of intelligent extraterrestrial life. Its entrance until the arrival at the base of operations are about 50 km.

2) The Naruto running style (an anime with the main ninja theme) is based on the way the characters in this universe run, keeping their arms straight and stretched backwards while the body is bent forward.

So let us call Y the maximum distance that one of the P people in the invasion group can run continuously. We will call X the smallest of the maximum distances that the other P-1 people (we remove the person who runs Y from the set) can run carrying another person on their backs. Thus, ignoring the resistance and friction with the military authorities, would it be possible for the invasion group to run the 50km running in the Naruto style and thus conclude the Invasion of Area 51?

Case 2: Y <50km. In that case, nobody in the group can run the 50 km without interruption. But the invasion in this case is still possible, since we can reduce the distance to be covered by Y by carrying each other on their backs. 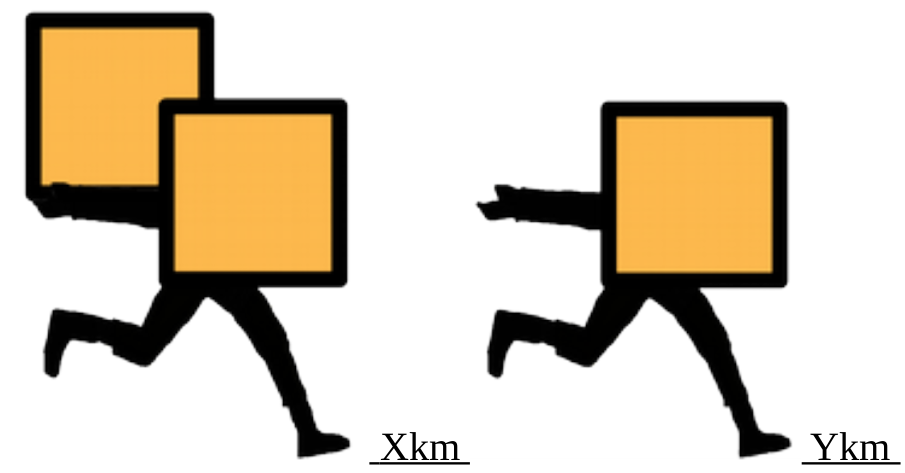 Two people would travel (X+Y)km. In this case, the subject who runs Ykm (on the right) would be carried by the first Xkm (on the left).

In this situation we call P the total number of people and each portion of the rush rush. For a person to invade Area 51, we will need n-1 rushs carrying him on his back.

2nd rush: When they reach the X km, the P/2 people who were running until now stop running, and the P/4 of the loaded people start to load the other P/4 people who were being loaded;

3rd rush: When they reach the X km, the P/4 people who were running until now stop running, and the P/8 of the loaded people start to load the other P/8 people who were being loaded;

In this way, a total of [(n-1).X + Y] km would be covered. In order to know the total number of rushs for this race, we need to calculate the logarithm on base 2 of the total number of people participating in the race. As we have an extra rush, referring to the guy who runs without carrying anyone, the expression we seek will be:

Assuming that of these, Y (maximum distance traveled by someone in the group) is 10 km. We have inequality 1.

That is, if X is greater than or equal to 2 km, the Invasion will be a success. This means, each person will need to run carrying his companion on his back for 2 km.

We cannot guarantee so easily that the Invasion would fail, as it would still be possible to rearrange the rush with different values of X1, X2, …, XN (distance that someone can run carrying another on their back) in order to maximize the total. Thus, the invasion will only fail if: