Lord Boros is a character in the anime One Punch Man, whose direct combat against Saitama (the protagonist) occurs in episodes 11 and 12 of the first season. Lord Boros is the leader of a group of aliens that have dominated/destroyed several planets throughout the universe until they reach Earth. However, in this fight he was the victim of (literally) astronomical bad luck … to understand what happened and how Lord Boros less than this bad luck would have won the “invincible”, we need to talk a little bit of mathematics with astronomy.

In a nutshell, One Punch Man’s protagonist is the hero Saitama, who for some reason that he doesn’t even understand, became super powerful and bald. That way, your enemies can’t resist a single punch from the hero (hence the name of Anime: One punch man). To contextualize the event that will be the subject of this discussion, I will narrate how it happened … but if you want more emotions, I recommend that you watch episode 12 of the first season of One Punch Man.

Lord Boros came to Earth guided by a prophecy about an enemy at his height … after 20 years of traveling through the universe, he arrives on our planet already destroying a large city with just one attack from his spaceship. Saitama will face him and the combat is disproportionate, as Lord Boros tries his best with his super strength, super speed, super agility, super endurance, energy manipulation, instant regeneration and advanced combat skills… but the hero in a demonstration sincere of boredom even asks if the battle is over? Perceiving the gulf between his powers, Lord Boros activates his “Meteoric Burst” using almost the maximum of his vital energy, sacrificing his life expectancy and initiating an absurdly fast and powerful series of attacks, ending with a super kick that makes Saitama collide with the Moon almost instantly. Saitama using the Moon as a support, jumps back to Earth in order to continue the fight … which leads to the destruction of Lord Boros without Saitama really taking the fight seriously, telling him in his last moments that the fight was ” difficult ”, just out of respect for Lord Boros’ committed effort to defeat him. 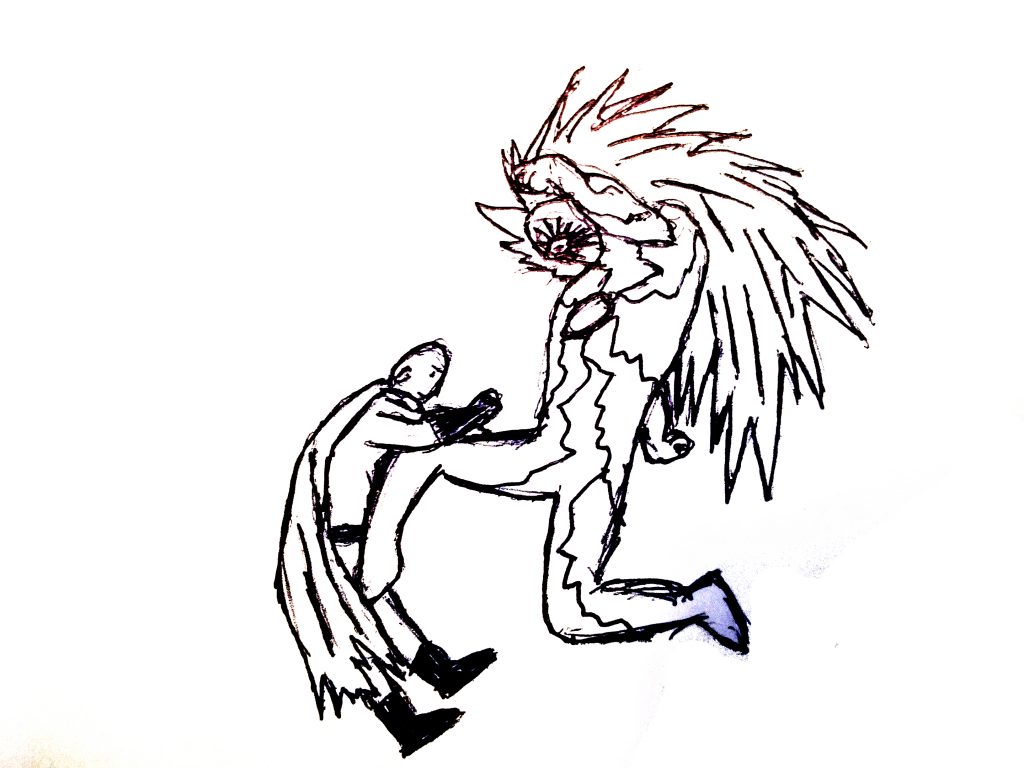 Kick by Lord Boros who hurled Saitama (the bald man in the cape) almost immediately to the Moon.

I admit, the first time we watch it is impressive … not even sending Saitama into space, it was possible to destroy it … and he returned at once, putting terror on the entity that came to destroy our planet … But after watching for the 3rd time we started to notice several mathematical / astronomical inconsistencies:

1) At what speed was Saitama launched to the Moon?

2) What are the chances of throwing someone into space at an absurd speed the subject reaches the Moon?

3) If he didn’t reach the moon, what would happen?

Some approximate measures that we need to keep in mind to continue discussion:

To better understand the meaning of these sizes and distance, I present in the figure below the Earth, the Moon and their distance in scale relative to their represented sizes.

Earth and Moon, both in size and proportional distance.

Considering that no speed in this universe is greater than that of light (299.792 km/s), your minimum travel time will last 1,28 seconds. On the other hand, if Lord Boros’s blow launched Saitama at the same speed as the fastest ship ever built by human beings in reality … Saitama would take almost an hour and a half to collide with the Moon … whereas the protagonist did not lose consciousness after the blow, this would be an extremely tedious trip.

Thus, it is only necessary to decide how long we imagine that Saitama was flying until it collided with the Moon. Analyzing the anime scene, it is difficult to determine precisely how long it took, but we can estimate with a relatively wide margin of accuracy, that this event lasted between 2 seconds and 1 minute. In the graph below you can choose the time (horizontal axis) in seconds and then determine the speed (vertical axis) in km/s that Saitama traveled. 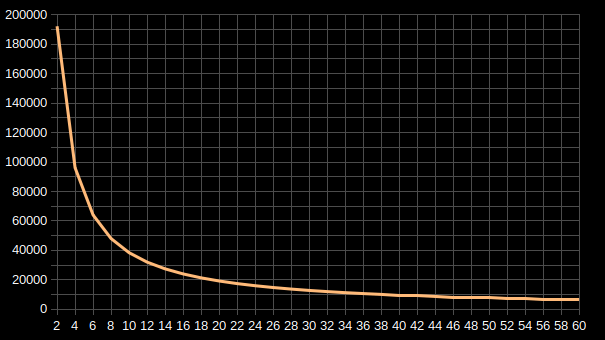 To determine the chance of kicking someone into space at an absurd speed and reaching the Moon, let’s assume that Lord Boros kicked Saitama in a direction exactly opposite to the Earth’s gravitational pull. Let’s consider the Moon as a circular target with a diameter of 3.474.2 km at a distance of 384.400 km. Thus, to reach the target, it could be out of alignment from its center at a maximum of 0,26 degrees.

It seems very unlucky that this happened … but if we think about it, Lord Boros also did not choose a position on Earth to attack … that is, the chance that he chose a position that is exactly above the orbital axis of the Moon (in the respective hemisphere), would be approximately 0,14% (we are assuming the Earth as a perfect sphere). Thus, the chance of Lord Boros hitting the Moon is the probability of these two events occurring, approximately 0,00002%.

If Saitama hadn’t hit the Moon, its closest point of support would be Venus. This is the celestial body after the Moon that comes a short distance from Earth, being able to approach our planet up to a distance of 38.000.000 km (100 times more distant than the Moon is from Earth).

Even traveling at the speed of light, Saitama would take at least 126 seconds (not to mention the improbability of reaching Venus being much greater than reaching the Moon). But this means that until he returns at best, he would give Lord Boros at least 252 seconds (4 minutes and 12 seconds) … time to use his maximum technique which, according to himself, would be able to destroy the entire surface of the Earth.

So, unlucky enough to have Saitama as his enemy … Lord Boros was unlucky again when the Moon was just above them on the occasion that he gave his super kick to Saitama … an unlucky amount of astronomical proportion that you can test if the same would happen with you playing a simple coin … if it falls 19 times in head , it means that you, in place of Lord Boros, would suffer from this same bad luck.