The study of music, as an aesthetic, cultural and scientific phenomenon, has taken place at least since the 6th century BC, in ancient Greece. There, music was part of the citizens’ formal education, which prompted philosophers to ponder over its origin, function and meaning.

In the 6th century BC, Pythagoras believed that music should be analyzed mathematically and only then it could it be treated as science. He postulated that the function of music is to bring harmony to the human soul. Pythagoras laid the mathematical foundations for the consolidation of an important musical scale; now known as Pythagorean or Just. This scale has 12 notes and is generated by the natural modes of vibration of a taut string , given by the arithmetic ratio of the proportions between the string’s length which is analog to the fundamental frequencies of the notes that it creates when excited; specially the proportion of 2 by 1 (representing an octave) and 3 by 2 (representing a perfect fifth). This intervals together allow, through the so-called “ circle of fifths ”, to define a chromatic scale of 12 notes within one octave, approximately one semitone apart. Pythagoras argued that all objective and subjective phenomena could one day be described through mathematics. Like other pre-Socratic philosophers, Pythagoras also believed in the medicinal powers of music, a concept, two hundred years later, also adopted by Plato and Aristotle. 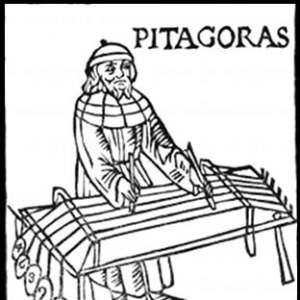 In the 4th century BC, Plato and his illustrious disciple, Aristotle, believed in the importance of music for all individuals and their society. Plato postulated that music education is fundamental in the formation of a citizen, stating that the aspects that make music “penetrate deeper into the soul, affecting it strongly” influence human behavior and consequently the behavior of all society. In particular, Aristotle stated that music has great similarity to emotion, since both are composed of movement (remembering that the word “emotion” comes from the Latin word “emovere”, which means “to incite or instigate movement”). In this way, music was seen by Aristotle as the imitation of human emotion, for having its essence constituted by movement. 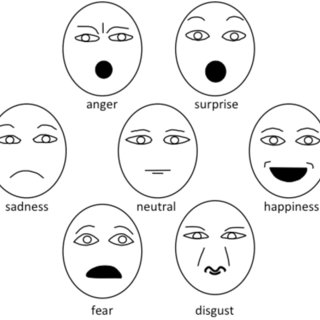 Plato classified the poetic styles in: Tragedy, Comedy, Epic and Lyrical poetry, being tragedy and comedy, according to him, predominantly mimetic. Mimesis does not seek to describe the truth but only to imitate it. Plato mentioned that Socrates used to warn his students to distrust the possibility of art to describe the truth (a task that, for Socrates, belonged to philosophy). In this way, the caveat Socrates placed was to beware the “seduction of art” (which I understand as the “persuasive power of arts”, specially music). Mimesis is explained by Plato through an analogy that himself attributed to Socrates; the metaphor of the Three Beds. It tries to describe how a simple object, like a bed, goes through many stages of developing and expression. The first one is the designer’s idealization (its composition). The second one is its building by a carpenter (its performance). Finally, the third one is its imitation by an artist, like in a painting (its notation). I would argue on the addition of a fourth one, which would be about its usage, which in terms of music could be directly related to the music appreciation or listening.

For Aristotle, Art is made of Mimesis and Mathematics, and its goal is to find and register what is perennial and timeless in the dynamic process of nature, where everything is born, constantly transformed and eventually decays. As I see it, for Aristotle, the goal of Arts is to imitate nature’s patterns (meaning, the patterns that the human mind perceives). Aristotle mentioned the existence of an identification distance between reality and its imitation, given by art. This distance allows art to be understood and appreciated by the public. Without this specific distance (which I see as a perceptual “sweet spot”) there would be no possibility to happen, in public’s mind, what he called “catharsis”, that is the “purification of emotions through art”, resulting in a sublimation of the state of mind. For me, catharsis momentarily tames the antagonizing emotions of whom behold a piece of art, which brings inner peace and thus is what ultimately makes arts to be appreciated and sought.

However, if there is an excessive perceptual distance between reality and the art (imitating this reality), it might be impossible to reach public’s empathy for this artistic endeavour, where its imitation of reality would not even be perceives, thus identified as art. According to Aristotle, there is an optimal perceptual distance between reality and its artistic imitation in order to be perceived by the public and appreciated as art. In addition, Aristotle also wrote that music has other important purposes, such as: generating pleasure; inspiring virtues and providing intellectual satisfaction. For me, art (and specially music) accomplishes its artistic goals when the public sensibility and the composer’s skills are enough to bridge the gap between imitation and reality in which the required distance between them is infilled with meaning that instills catharsis in the public’s minds.

At the end of the 4th century BC, Aristoxenus of Tarentum, who was both educated in the Pythagorean school and a pupil of Aristotle, united the aspects of his training and developed his own thinking on music, where for him human perception is a fundamental and indispensable part of understanding and feeling music. Aristoxenus believed that music was, at the same time, Science and Art. Therefore, a proper judgment of musical structures should be done through empirical analysis, which means, through the act of music listening, and not only through the use and understanding of mathematical proportions, as suggested by Pythagoras. Aristoxenus wrote several treatises of which the only ones concerning music that have survived are: the “Elements of Harmony” and fragments of the “Elements of Rhythm”. By including perception in the study of music, Aristoxenus introduced the importance of psychophysiological factors that shape and modulate, through hearing and listening, the perception and understanding of music. His proposal of adopting an empirical approach in the study of auditory data, for the understanding of the musical phenomenon, ratified the bases of what, more than 20 centuries later, came to be known as “systematic musicology”. This one deals with the empirical and interdisciplinary study of music through data retrieval and analysis; in other words, the scientific study of music. This huge (20 centuries) pause in the development of systematic musicology is mainly due to the fact that the technological resources to allow the retrieval and analysis of acoustic and symbolic data from musical pieces only came to exist in the second half of the 20th century, with the advent of digital audio and computer technology. 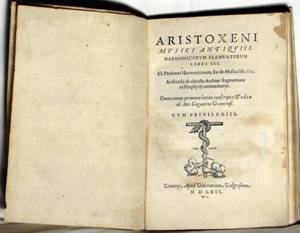 In the medieval period, the study of music was marked almost exclusively by a single author; Anicius Manlius Severinus Boethius, commonly known only as Boethius. In the 6th century AD, Boethius, who was a Roman philosopher and senator, produced an important literary work on music, entitled “De institutione musica” (The principles of music). He believed in the mathematical and universal proportions contained and expressed by music, as postulated 12 centuries before him, by Pythagoras. In the first chapter of his book, Boethius presents his theory of Pythagorean inspiration, postulating that the harmony that governs universal laws is the same as the one that governs music. Boethius classifies 3 types of harmony: Mundane; Human and Instrumental. Mundane harmony, also known as “universal music” or “music of the spheres”, was defined as being constituted by the proportion and regularity found in the movements of celestial bodies (such as planets and satellites), occurring as a form of inaudible harmony in spite of being regular, perennial and responsible for the maintenance of the world and the universe as we know. Human harmony defined the proportions and regularities found in the human body and especially in what was then understood to be the human soul. Instrumental harmony was defined as being the only one that is in fact audible, since it is produced through the physical actions of singing voices and musical instruments. According to Boethius, this was generated by different types of musical instruments which could be constituted by objects under tension (such as taut strings), under the action of the wind (such hollow vessels and wind instruments) or by percussive objects. His work in music was also fundamental to the historical record of music from ancient Greece, which without Boethius could have been lost throughout the past centuries. 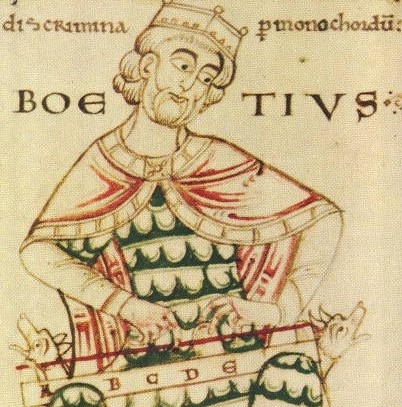 Illustration by Boethius.
Source: Boethius And His Influence On Art

This article briefly presented how the philosophy of ancient Greece had and still has a fundamental role in the understanding and development of the musical phenomenon, both in terms of individual artistic expression and in its social representation and influence. The studies carried out by Pythagoras, Plato, Aristotle, Aristoxenus, Boetius and many others, reverberate to the present day, offering secure bases for the understanding of music as a ubiquitous and exclusively human form of sound expression, which blends in its studies both the objective aspects of science and the subjective aspects of art.

Sophie Gibson, Aristoxenus of Tarentum and the Birth of Musicology. London: Routledge (2014).