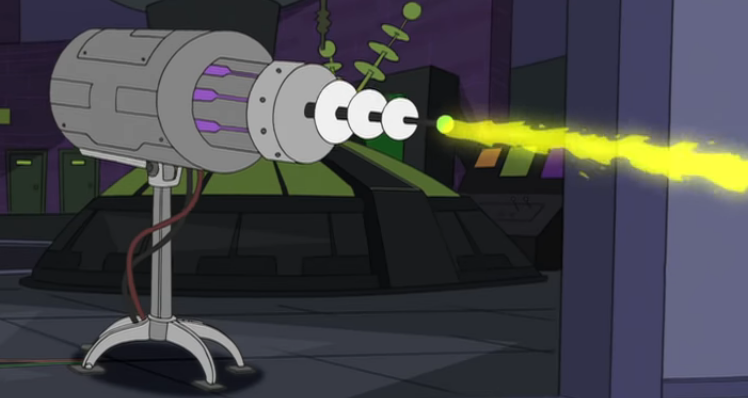 Today we completed 1 year of posts, to commemorate this special date brought an analysis of my favorite cartoon, Phineas and Ferb. In particular, episode 187, “Huge Water Balls”.

In this episode it is quite hot and Dr. Doofenshmirtz (an evil scientist) misses the winter when he used to go out for an eggnog. So he goes to where he used eggnog in the winter and asks for an eggnog, but the employee says that eggnog is only served in winter, and it is not winter. He gets angry and angry, but it doesn’t solve anything, so he goes back to his house and decides to solve it in his own way.

He builds the Double Negative-Inator, a machine that fires a laser and adds a negation to a negative sentence, making it a double negation. Thus, according to Dr. Doofenshmirtz’s plan, he would use the laser on the bakery employee who would add a “no” to the original sentence, thus saying: “eggnog only served in winter, and it is not winter”. Therefore, the double denial would imply that it is winter and it would serve as an eggnog for him.

Leaving aside the complexity of the plan, we arrived at the main point of this post. The idea that a double negation is the same as a statement is not always true.

We are used, even in university mathematics courses, to start studying logic from Classical Logic, and to imagine that it only exists. That everything can be solved with Classic Logic, that we can go around assigning statuses of V and F in the propositions that we will arrive in a truth table that will indicate all possible instances for a certain statement. In fact, from 2009 when I started in Mathematics, until the beginning of this year (2020), I was sure that Classical Logic solved everything… but then I went to study the subject a little and got to know other logics, such as Positive Logic, Minimal Logic and Intuitionist Logic.

In terms of resources and tools, they are simpler logics (we have less properties to use than in Classic Logic). However, this scarcity of resources is also responsible for its high complexities. For example, in Positive Logic we do not have the concept of negation, it is not possible to deny anything, so to represent a sentence that would be simple to write with a negation, sometimes we need to make several turns in other connectors or even it is impossible to be done.

If the story seemed complicated, in Minimal Logic things get worse, because although we have the denial, there is no definition about what an Absurd is (a situation in which we assume something and we arrive that it is false and true at the same time). In this logic, this exists, but it is not defined, it exists and that is it…

In Intuitionist Logic the Absurd is already defined, but there is still a principle that is the difference between this logic and Classical Logic, called the “Excluded Third”. This means that any statement can be either True or False, and there is no third possible status for it. Thus, any statement in Classical Logic is either True or False. But in Intuitionist Logic this is not defined.

The first time I heard about Minimal and Intuitionist Logics, I thought they were simpler because they had fewer rules, or at least weaker than Classic Logic. But the fact that they have fewer rules allows for some very bizarre things … for example, it is possible to represent Classical Logic from Minimal or Intuitionist Logic. That is, the two logical systems with fewer rules are able to support all the claims of a system with more rules.

But what does all this have to do with that episode of Phineas and Ferb?

In fact, Dr. Doofenshmirtz created a machine that inserts a negation into negative sentences. In the hope that reaching the bakery employee, she would serve an eggnog by saying that “it is not winter”. That is, Dr. Doofenshmirtz assumes that the world works entirely on Classical Logic, in which a double negation is equal to an affirmation.

An example that Classical Logic is prevalent is the usual Mathematics. In it we see that multiplying a number by (-1) inverts its sign. If it was positive, it becomes negative, if it was negative it becomes positive. Thus, a double multiplication by (-1) would be equivalent to a double sign inversion, making it positive.

Another example in which this inversion works is also with matrix transpositions. Whether A is a matrix, B is the transposed matrix of A, if we transpose B, we will again have matrix A. That is, the double transposition of a matrix is ​​equivalent to a double negation in Classical Logic.

However, in our usual communication, we sometimes resemble Intuitionist Logic. For example in the employee’s own speech about eggnog.

“Eggnog is only served in winter, and it is not winter”.

“Eggnog is only served in winter, and it is not winter”.

Let’s take a closer look at this sentence, separating it into parentheses.

We have the statement is winter.

We then have the negation of the statement (it is winter), which generates the following possibilities:

Finally, we have the negation of one of the 3 possibilities above.

Therefore, saying “no (no (it’s winter))” is different from saying “it’s winter”.

Yes, apart from other flaws that Dr. Doofenshmirtz inserts in his plans (such as self-destruct buttons) and the presence of an enemy that prevents him (Perry the Platypus), his own initial plan was already supported by a logical structure that did not admits the “Excluded Third” principle. That is, even if no one stopped him, he could finish without drinking his eggnog.