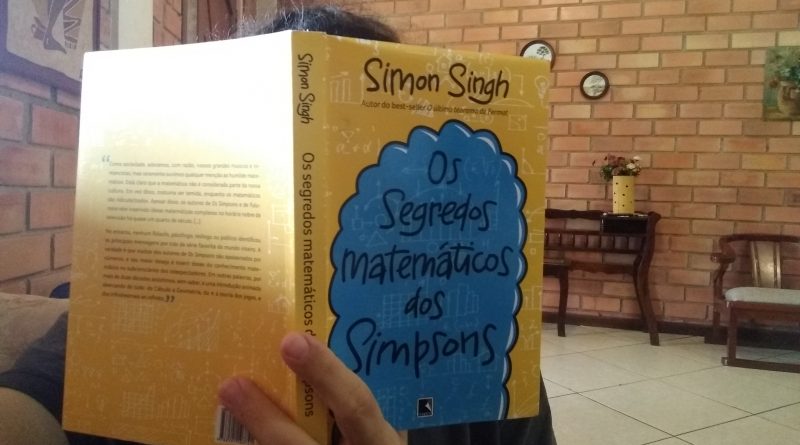 Reading Simon Singh’s “The Simpsons Math Secrets” was an experience that closed many gaps in my life as a humorist mathematician. For starters, I’m glad to discover that some of the Simpsons writers and producers gave up their careers in Mathematics, Physics and Engineering to write comedy and ended up allowing a lot of math to come to the Simpsons episodes.

In fact, when we talk about the field of mathematicians, maybe it comes to teaching and then some things related to calculations, predictions, estimates… maybe working in industry, in banks, or even in computer projects… but it’s interesting how Simon Singh presents the experience of The Simpsons (and Futurama) writers as well, relating theorem-solving skills associated with creating jokes.

Like, someone has an idea for a joke involving the Bolzano-Weierstrass Theorem, but it’s not even an idea, let alone funny, it’s more of a raw possibility of making humor… so the work of looking at this idea begins, model it in different arrangements and shapes until you get some minimally acceptable joke.

Simon Singh is an author that I really like, especially the book “Fermat’s Last Theorem” that I read in 2016 when a professor in the computing department found out that I was a mathematician and was enrolled in his postgraduate course in computing, and he came all excited , lending me a little book of 200-300 pages in English saying that he had loved it and that I would like it too… I really liked it a lot, I don’t even know how I managed to read it at the time with such tight English, but I think the way Simon Singh writes helped a lot. This author connects the facts and contexts a lot, making the reading support other elements and thus become lighter.

But back to the book itself, the most exciting part and that I finally have a solid argument to say thanks to this reading, is because I think Futurama is better than the Simpsons! (actually I always said that, and people always doubted me).

The fact is, Futurama has a theorem of its own! Yes, a math theorem was developed just so the plot of the episode “The Prisoner of Benda” was completed.

The theorem involves permutations of minds between bodies of two people with some restrictions.

Among other things, the book discusses how the Simpsons and Futurama have placed mathematical jokes in various contexts and also what these jokes are based on, relating them to the historical contexts in which they occurred, even the question of why all the characters ( except one) have 8 fingers and do they use the decimal system? These are very interesting points that the author presents and discusses, without letting the reader get lost in the calculations.

The book also has a final part in the chapter on math jokes, at various levels of complexity to understand (or find funny), ranging from Elementary School to Doctorate.

Overall, I thought it was a great book and had been recommended to me on several occasions… basically when you talk to someone who is doing math science, there is a greater than 0 chance that they will recommend this book to you (there is also a greater chance than than 0 of being killed by a duck on low)

I got this book on my 30th birthday as a gift from my parents, thank you mom and dad this post wouldn’t exist without you 🙂