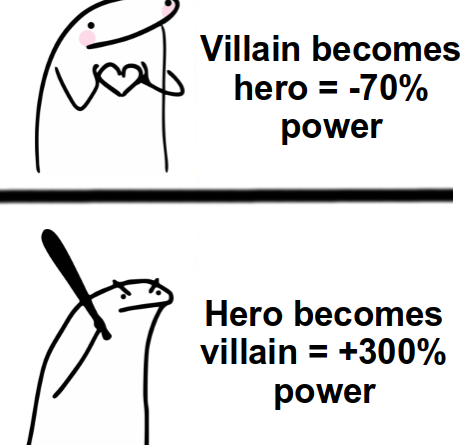 A meme has been circulating on the internet these days showing:

So far so good, this is kind of true in the animated series… you see an overpowered guy going to the “good” side and starting to fight at the same level as the other heroes. Likewise, you see average characters going to the “evil” side and getting absurdly strong. (the meme is basically the same as the cover of this post, I just didn’t use the original images to avoid copyright issues)

But what caught my attention is that in the comments of this meme on the internet, there are several people saying that it would be enough for the hero who became a villain, to go back to being a hero who would continue with a high power. So, would this “method” work?

Let’s look at what happens for a random value (picking any value to test for relationships is always a good technique to understand what’s going on).

In both cases our power increased after we went back from our initial choice. Let’s express this in general terms then, starting with the villain:

Thus, with each return to his initial decision, the villain returns 20% stronger than he was initially. Let’s now analyze the hero:

Thus, with each return to his initial decision, the hero returns 20% stronger than he was initially.

Cool, but mathematicians are lazy beings, so it would be very tiring to keep calculating this back and forth over and over again to know what the power would be after a character has changed sides N times. To resolve this issue, we can express the power of characters as terms of a sequence.

Let’s say that every character is born good and at some point he turned bad. So let the sequence be Power(N) where N represents how many times the character changed sides. So let’s take a look at this sequence to try to come up with a cute way to write it.

In this case, we see that 6^N will grow at a faster rate than 5^N. Thus, as N increases, 6^N/5^N will grow unrestrictedly. Examples:

We can see that this won’t stop growing 🙂