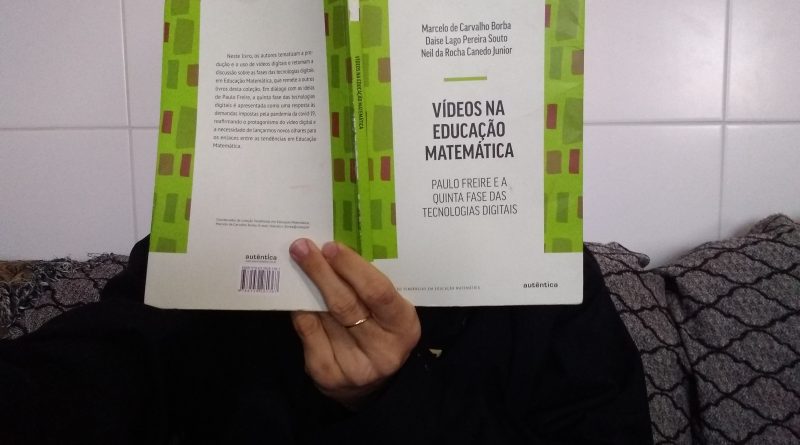 While some books follow an increasing pace, this one is already starting to add fuel to the fire by presenting what they understand as “the fifth phase of digital technologies”. I say this not only because of my impression of chapter 1, which begins with a part of the title of the work, but also because of the vision and long discussion that this issue generated at the PECIMAT meetings (Digital Technologies Research Group in Mathematics Education and Teacher Training) that I participated involving this book.

In fact, we chose to discuss this work in the 1st semester of 2022 for several aspects, among them the relevance of this discussion, the author’s relevance to research in Mathematics Education and for bringing in its title the name of our patron of Education, Paulo Freire. At first, it would be a very interesting work to delve a little deeper into the theories of this great educator (used so many times out of context) with Mathematics Education in a scenario, although still pandemic, already more naturalized with this situation after 2 years of crisis.

1st phase: Marked by the incorporation of the LOGO software in math classes, which brought the possibility of developing different representations and problems from a programming environment.

2nd phase: Marked by specific software that can be used directly without the need to program them, such as Winplot, in which you could generate several graphs by directly inserting the mathematical function.

3rd phase: Marked by the popularization of the Internet, on this occasion, virtual spaces with mathematics content such as blogs (like this) begin to emerge, as well as sharing and learning environments based on courses and forums.

4th phase: Marked by the increase in internet bandwidth, with this the volume of content is no longer a limiting factor, enabling the use of the internet to share videos, carry out synchronous activities and work in shared virtual spaces.

The controversy then arises, as reported in the book itself, with the BOOOOM that these 4 phases had in Mathematics Education research. It should be noted that the phases are not replaced, but are added. For example, Scratch can be considered a multiphase object.

I believe that up to this point we have an agreement between the phases, but behold, according to the author, a few years ago an agitation began to discover what the next phase would be. Or if we would already be living in the 5th phase. Despite the mood, the author maintained the idea that the phases are marked by significant changes that separate them. Small changes would only be a development of one phase, not a jump to the next. However, with COVID-19 there was a change that led the author to assume that, in fact, we have entered a fifth phase… were you curious to know what it was? Or how was the 5th phase defined to the point of leading our PECIMAT meeting into a heated discussion? So… I’ll keep this a secret so you can read the book and discuss it with us in the comments 🙂

After this first chapter that worries readers, the book continues at a more relaxed pace, discussing some events that occurred before the pandemic, how they started to occur in the pandemic and how they were both influencers and influenced by the change that occurred. Throughout the book, the authors draw links with some thoughts and Paulo Freire, but this would not be a suitable book for those who would like to delve deeper into our patron of Education. For although the mastery that the authors have over Paulo Freire is clear, it seems that the urgency to launch this book in the midst of a scenario that is still pandemic, meant that the fittings of these ideas to the work did not have their full potential.

The book itself is a very broad overview of digital videos across various spectrums of Mathematics Education, covering festivals, academic formations, and leading to several reflections about them. However, his chapter 4 was the most enigmatic. To get an idea, a 2-hour meeting of our group was not enough to understand the theories treated and remodeled in this chapter, we had to call a supervisee of the author, whose research was a reference in this chapter to try to explain his theory to us, to so let’s get back together on top of this chapter. In fact, this chapter is not only spatially central to the book, but is also central to the discussion for tracing a relationship of human-beings-with-media, with activity theory in motion, and social semiotics and multimodality. If these theory names already seem confusing, imagine a lean discussion about them (26 A5-size pages seemed like a little).

Chapter 5 is quite calm compared to Chapter 4, although it discusses methodologies for analyzing videos and the so-called mini-cyclones of expansive learning, understanding these topics seemed much simpler and more objective (it is possible to create mental representations of these ideas more easily than about activity theory). While chapters 6 and 7 make a closing tone, some reflections on what we will be living in the post COVID scenario, and how these changes irreversibly influenced what will become the new normal for Mathematics Education.

This was a very “fun” book to read, and by fun I mean a little “unsettling”, because as you read it, you start thinking and squirming in your chair, wanting to trace some ideas but you know you need to keep going. reading. I think this is a very positive reaction, because although we may disagree and have reservations about whether or not we are in a fifth phase, this is certainly an aspect that will lead to more discussions that add up in this direction of knowledge.

I thank Editora Autêntica for the courtesy book “Videos in Mathematics Education: Paulo Freire and the fifth phase of digital technologies” by Borba, Souto and Canelo Junior, which enabled the production of this text.