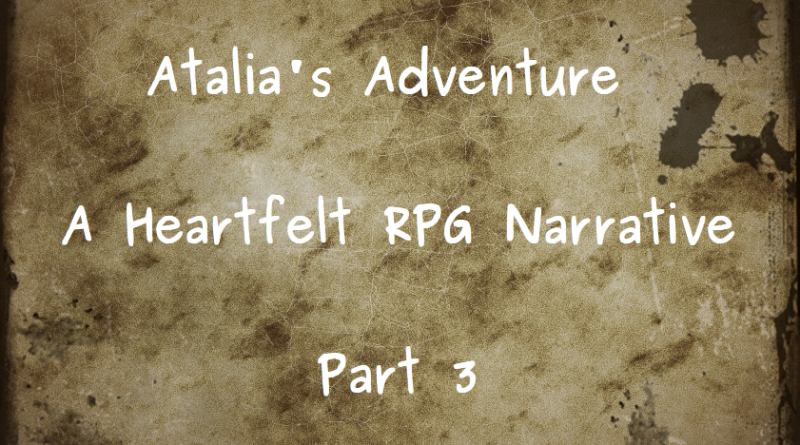 Back on the road, Atalia continues walking, not knowing exactly where she was going. Her pace was slow and her appearance was pale, her bandages hadn’t been changed for more than a day, she slept sitting in the forest (and the night before she didn’t even sleep), she was eating things she found on the way and didn’t know how much her body he would resist that way, but at least the sun’s rays gave him a revival. After some time walking, she hears in the distance a wagon approaching in the opposite direction from which she was walking. She was afraid she would end up going back to where she came from, but her state was too complicated to ignore that opportunity. As the wagon approached, Atalia waved and they stopped.

Atalia knew she couldn’t do anything, so she follows her course on the road, walking with difficulty and always looking for something that might be edible on her way. After a while she sees another cart pass, this time in the same direction she was going, this time when they approach her, she waves and they stop.

Despair began to beat in Atalia’s heart, she felt terrible about the situation, too afraid to succumb there in that childish attempt to escape. Her icy hands, with vertigo she walked with great difficulty, it was already afternoon when she started to warn another wagon. As the wagon approached, Atalia waved and they stopped.

Atalia felt that it was the end, she had nothing else to do and not even tears to cry, only a dry sigh of someone who felt death approaching. After walking some more, she found what appeared to be a burned-out house and got closer to get a better look. The roof of the house had already collapsed, most of the wood had turned to charcoal, but there was still a part of the wall that had partially resisted the fire, that was by far no shelter, but at least it would be better than sleeping in the forest. She braced herself and covered herself completely, she felt very weak and sad, when darkness came, again that feeling of complete pitch and loneliness that accompanied a terrifying fear. Desolate in the dark, she remembered her firefly, and took it out of the envelope, longing to see a little light as it had the night before and brought her peace.

Atalia, not understanding, could barely wipe her tears to look clearly, but that glow began to fill the emptiness of her heart. She was happy, because it seems that her firefly had not died, it must have just been sleeping and had woken up. It gave her peace, thanking him for his existence, yet her weariness quickly sent her into a deep sleep.

I really had no idea how things would turn out in today’s adventure. I thought at first that the ride could be a good way for Atalia to meet people, get involved in another job, advance in a collective journey… but there were three missed opportunities, leaving her in that dark situation again. I had already thought that her next skill linked to necromancer spells would be linked to reviving the firefly, but I thought that wouldn’t happen, after all, although it doesn’t seem like it, there was about a 25% chance of that happening and not 70% as it seems at the time of the test. To understand this, let’s remember conditional probability, the chance of her not getting a ride is given by the product of failure in the 3 opportunities that appeared:

In that same vein, her chance of acquiring the ability to revive her firefly depended on her not getting a ride.

However, by the time of the test, it was clear in my mind that the skill would be “reanimate insect”. However, this started to seem a bit too generic to me, something that often occurs in RPG’s and somehow generates an imbalance in the game, which will be the topic of discussion in this post.

To begin with, Coleoptera is the order of insects that includes beetles, a group that, in my opinion, is quite useful to an adventurer, after all, we have beetles with very varied functions and that allow very creative uses (as I hope to have the opportunity to explore in upcoming adventures). The decision on this skill instead of the reanimate “bugs” skill was made by better understanding what the reanimate skill would be. In discussion with a friend who likes RPGs, we were trying to understand whether a simple creature like an insect would deserve to be considered undead or would simply come back to full life. The question itself led us to realize that the necromancer skill should not be about curing the insect, but rather about making it work by force. It would be as if there were a current of magical energy that compensated the creature’s organism, making it work. Similarly, it would be as if the damaged parts were replaced, allowing the machine to move, but these replacement parts only exist as long as the magical energy exists. When the parts are removed, the body returns to being inanimate, as it needed those replacement parts to function. Anyway, the point of all this is that there are physiological differences between insects, just like there are mechanical differences between cars. A part of a specific brand may not work on another (sometimes the brand itself may not work by varying the model). So, reanimating an insect structure like a beetle is not the same as reanimating a structure like a praying mantis.

We have this very clear, for example at the University. Researchers from the same fields, fellow graduate students, people who basically have very similar backgrounds, come across each other’s work, and feel that they don’t understand much of what has been done. Not because of a lack of study, interest or ability, but because the fields of specialization are very specific, and they become narrower as we go further in one direction (whatever that is). However, in RPG’s we usually see a generic skill development that indicates the “trend” of the system.

For example, in a combat-focused system, most conflicts are expected to be resolved in the heat of battle. It would even be frowned upon by the group, a player who tries to solve things through other methods. I say this from experience, because on some systems I’ve played in multiple groups, this type of situation was repeated. As much as strategies and creative ideas were used to avoid or even end the problem without blood, the general context called for this to be taken into battle. In these cases, we saw that the system had well-developed rules and metrics and techniques to define who hit the hit, how much damage each hit generated, what initiative during the fight, if there would be the right to counterattacks… we also saw that there was a high refinement in the combat skills, such as short sword fighting, broadsword fighting, dodging, using shield, using two swords, fighting with the opposite hand, fighting with the long sword, fighting on horse… your starting points in these skills to be average.

On the other hand, some skills that would have less importance in that context were kind of generic, for example, “First Aid”. Basically, the character had the ability and went around “healing” everyone, whatever they had and whatever they had at hand. The workarounds were made and oops, we cured the subject, or at least minimized the damage suffered.

But if the skill was unimportant in that context, it was totally generic, eg “Fashion”. A character with this ability, even if he invested a few points, would become an expert in all situations involving all times, contexts, groups, styles… something that simply does not match the reality of someone who studies this subject.

It is in this perspective that I claim that it is possible to identify the profile of the system from what is “dense” in the development of its rules. In the Daemon system for example, which I had a lot of affinity with in my adolescence and youth, the focus is clearly on combat and magic. There are stacks and stacks of rules, details, conditions, and notes to define how spells (mostly combat-related) will work. While in other systems we see that spells (even combat) are much simpler, with the focus being on combat without spells. We even have some systems in which the character’s dialogue and intelligence is attributed to the player, and the points invested in these attributes are somehow ignored (we talked a little about this in the previous post).

So why don’t we do everything very specifically? This would be more like real life. This is certainly not a new idea, but the problem I see with it is the size of the branches and intersections that exist in real life itself that would extrapolate a short description for any character.

For example, I practiced Kung Fu for some time, but for those who know a little more about this martial art, I would ask, ok, but was it from the North or the South? So I answer that I was from the North. But the conversation doesn’t end there, the person can then ask, what was the style? So I answer that it was Eagle Claw. But the conversation doesn’t end there, one can ask what is the branch of the Eagle Claw that I trained? Then I answer that it was Grandmaster Lily Lau’s.

Realize how even an ability described simply on a sheet can have very different ramifications. That’s because we haven’t thought about intersections yet, for example, I also trained Capoeira, Karate, Judo, Kendo, Jiu Jitsu, Chinese Boxing, Chinese Judo. Each one with its specific ramifications but all of them with intersections that would somehow contribute to a skill related to hand-to-hand combat. See how difficult it is to say that there are generic skills and not even to describe them specifically?