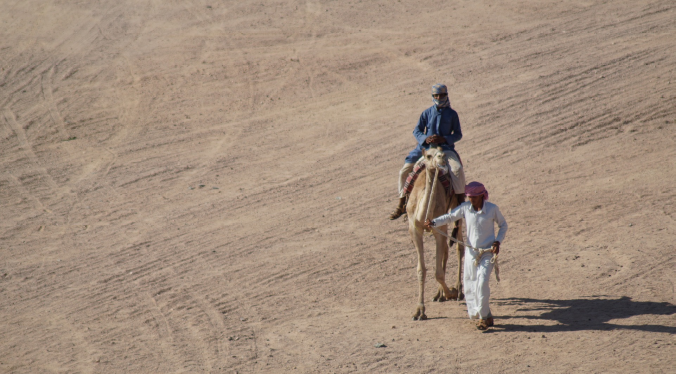 Organizing the problems of the book The Man who Counted, transcribed the passages in which he solves mathematical dilemmas within the context of the history in which he is involved, when I came across a detail. Among all the problems and their solutions presented, certainty in the resolution was always present, so success was seen as inevitable. However, in the last of the problems I noticed something strange, and mentally determined a situation that served as a counterexample for his certainty. So, I was amazed to discover that among all the difficult challenges that Beremiz faced, in the last and most valuable (because his beloved was at stake), he got it right, but not for sure, but luckily.

At first, let us recall the problem in which Beremiz (protagonist of the book The Man who Counted) needs to discover the color of the servants’ eyes. He was aware that of the 5 veiled servants who stood in front of him, two had black eyes and three had blue eyes. Those with black eyes always spoke the truth, those with blue eyes always lied. Beremiz would have the right to ask three questions for them and would therefore need to find out the eye color of all 5.

1st question) Beremiz asked the first servant what color his eyes were. She responded in a language unknown to the protagonist. The servants were warned by Sutut to respond from now on in the common language, but for Beremiz he had already used his 1st question and received his respective answer.

3rd question) Beremiz asks the third servant what the color of the eyes of the two servants he has already asked questions. The servant replies that the first has black eyes and the second has blue eyes.

Beremiz then claims to already know the answer to the eye color of all 5, and explains his reasoning. When asked the eye color for the first, he knew his answer regardless of the language in which it was said, because:

A) If she had blue eyes: she would lie saying that she has black eyes;

B) If she had black eyes: she would tell the truth, that is, she has black eyes.

A) If she replies that the first servant said she had blue eyes: then she would be lying, then she herself has blue eyes.

A) If she says that the second servant has black eyes, then she lies, then she has blue eyes. And the answer you give about the first servant will also be a lie.

B) If she says that the second servant has blue eyes, then she tells the truth, then she has black eyes. And the answer you give about the first servant will also be true.

In this way, the protagonist deduces that both the first and the third have black eyes, and therefore the second, fourth and fifth must have blue eyes. But although the protagonist discovered the solution with his three questions, this was not a “mathematical certainty” as the rest of the book deals with and as it emphasizes whenever it solves all other challenges. To show that getting the problem right with these exact 3 questions asked is a matter of luck (and not a little luck, but considerable luck), I will need some artifacts from combinatorics.

Being 5 servants, we have 5! that is, 120 ways of spreading them from left to right. However, given that for this problem, we are only considering their differences based on the color of the eyes, then we have 3 with blue eyes and 2 with black eyes, being indifferent the exchange between positions of two servants with the same eye colors. Thus, we have 5! / (3! .2!) = 120/12 = 10 combinations.

Thus, in the case of the book, Beremiz was in the 2nd combination presented, with the layout of the table (left to right) being the same as that of the servants. We can be impressed, as these same questions would solve the problem if used for the 1st combination for example:

1st answer → my eyes are black (spoken in another language);

2nd answer → she said “my eyes are black” (then the 2nd servant speaks the truth);

3rd answer → the eyes of the 1st and 2nd are blue (then the 3rd servant and the 1st speaks the truth).

With that, we know which are the two that speak the truth and one that lies, and the remaining two by exclusion, lie. However, for combinations 3, 4, 5, 6, 8 and 10. These questions would not be enough. For we would only know that one of the servants speaks the truth and the other two lie. There remains an unknown about the other two, since one of the others has black eyes and the other has blue eyes.

So, of the 10 possible combinations of servants, we have to use the 3 questions in the book, in 4 of them, he would be 100% sure. While in 6 of them, he would have 50% doubt about the correct verdict. Thus, his chance of getting it right with absolute certainty using his 3 chosen questions was only 40%.

2 thoughts on “The Luck of the Man who Counted”