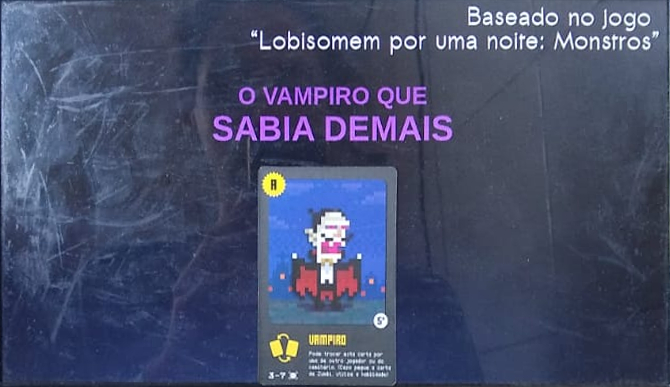 “You don’t know anything, Witch” – said the Vampire

The game “Werewolf for a night: monsters” is a variation of the popular game “Werewolf” (we have already covered this game in the post Siege of the last Beast of Gévaudan). In it we have characters with specific powers and actions that are performed in the same order that we will present:

After the actions, a debate begins to find out who the Werewolf is, there are also characters from Dead (Dead team) and Villagers (Villagers team), both without powers. The number of Villagers and Dead cards varies according to the number of players, between 3 and 7 (not counting the Storyteller).

At first, it may seem that the Witch knows a lot, as she knows the identity of one of the players at the table and is the second player (thus, she knows if there is a Hunter in the group, as she will be missing a card in the graveyard). But what if I say that the Vampire may know much more than the Witch?

The Witch’s scrying problem stems from the moment she plays.

To simplify (maybe simplify isn’t the best word for it), I’ve organized from what the Witch saw of a player’s hand, who he could be until dawn. It is interesting to note that if the Witch has seen a Hunter or a Villager, she can be sure to trust both of them after dawn, as they can at most have switched to Vampires (also from the Villagers team). On the other hand, if the Witch has seen a Werewolf, it is not possible to be sure that he will remain a Werewolf at dawn (it could be a Vampire). And the worst of the situations involves her seeing a Zombie or a Vampire, because in that case, she will be sure that by dawn they will no longer be who she saw (except for her seeing a Vampire and herself dawning as a Vampire, in this case, will know that the former Vampire is now the current Witch, who is on the Villagers team, so you can trust).

In the event that he exchanged the card with someone who had the Witch, the former Vampire will be able to use his power to see the identity of another player (as the former Witch he already knows will be the current Vampire). To simplify how this information changes, I organize the events of the Vampire’s action in the diagram below.

In order to determine how certain the Witch is, we’ll need to define some game conditions. Let’s say we are 7 players without considering the Storyteller, in which case we have 1 Hunter, 1 Witch, 2 Werewolves, 1 Zombie, 1 Vampire, 2 Dead and 2 Villagers. Of these 10 cards, 7 are dealt to the players and 3 are in the middle of the table (graveyard).

The probability of initially having a Vampire among the players is 5/6, as we have 5 players with unknown roles and 1 unknown card in the graveyard.

In this way we have:

So while the Witch may think she knows the identity of someone in the game, there is a margin of uncertainty that can get her into trouble during the debate. Something that certainly doesn’t happen with the information the Vampire carries, as the identity of the player he swapped with will remain at dawn (that is, it will undoubtedly be the new Vampire).