The dating game is cruel. It can be poetic like in sea dragons or it can be lethal like in the spider on the left but, in general, it is not easy.
If the male of the Australian redback spider Latrodectus hasselti doesn’t try hard enough, he is immediately killed by the female he was trying to impress. Jeffrey Stoltz and Maydianne Andrade, from the University of Toronto Scarborough, in Canada, showed that the maiden demands at least 100 minutes of display (I saw the news here). If the suitor fails, the surviving rival wins. And there is more: in the paper they published in October in the Proceedings of the Royal Society B, the researchers also showed that a competent male mesmerizes the female in such a way that it becomes easy for a smart sneaker who didn’t make any effort to mate with her without anyone noticing. Cheateries of the wild world. 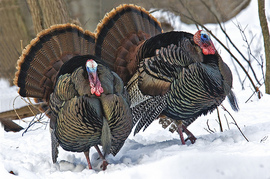 Less akin to Halloween, but not any easier, is the dance of the wild turkeys of the species Meleagris gallopavo, common in the United States.
In the picture on the right, which I borrowed from flickr (johndykstraphotography, you can see some of the hardship. During the courtship season, the males puff up their feathers, fan out their tails, change their breathing in such a way that their heads become blue, bloodless, and some appendages on the head (the snood, the dewlap and the caruncles) become bright red and engorged with blood. They hold this posture for some time while they take short runs forward and gobble, which can be heard from far away, over the hills. They do this for hours on end, during weeks on end.
During my Ph.D I used to see these animals at Hastings, a research station managed by the Museum of Vertebrate Zoology of the University of California at Berkeley. My labmate Alan Krakauer was studying the turkeys and I had the privilege of helping him out sometimes. But more then helping, I used to get spellbound by the strutting of the turkeys. Unlike the turkey hens, who pecked at the ground looking blasé. I even took loads of pictures, but can’t use one of them here because they’re on slides. Alan was trying to unravel a mistery: all this work to seduce a hen. The males display in pairs like in the picture. Do both win? Do they compete?
After much following the animals, setting huge traps, marking them, watching them and doing genetic analyses, he found that the wild turkeys are a textbook case of cooperative seduction. Only one of the males, always the same, scores. The other one helps with the synchronized dance, but leaves empty-handed. Genetics make up for it, according to Alan: the partners are closely related, so indirectly the secondary male ends up passing his genes forward. That’s kin selection, or Hamilton’s rule (William D. Hamilton mathematically described the theory). The turkey work earned Alan a paper in Nature in 2005. 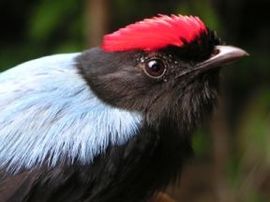 But helping with seduction doesn’t always come from kin solidarity. Another Ph.D labmate, Emily DuVal (now a professor at the Florida State University, the picture is from her lab’s website), studies the charismatic lance-tailed manakin Chiroxiphia lanceolata, in Panama. There, a pair of males sits on a horizontal branch and they fly over each other like a cartwheel. Until the female is convinced. In their case, the dancing partners are not related. What seems to happen is that the subordinate male gains experience while at it, and some day he just might get there.
Mercival Francisco, from the São Carlos Federal University at Sorocaba, in Brazil, argues that the blue manakin Chiroxiphia caudata, typical of the Brazilian Atlantic Forest, follows another system. In a paper published this year in The Auk, he shows that groups of dancing males (several of them in this species, not just a pair) may or may not be related. As he told me when I wrote a story on his work for Pesquisa magazine, they tend to stay where they were born. By chance, they may end up dancing with kin.
When I told my cousin Laura about the manakins, she expressed regret that the males of these birds are so spruced up but not ours aren´t. “Men have Ferraris,” I joked. A guy was passing by, not in a Ferrari but with a blasting stereo, elbow sticking out of the window and watching out for any women who might be watching. I never saw a woman do this. 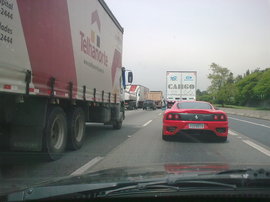