Brazilian Megafauna: hard to hunt or to chew?

There is a mind boggling enigma in the South American fossil and archeological record, in special the ones found in Brazil. The first human beings to live here coexisted for at least a millennium, and probably a lot more, with mastodons, giant sloths, horses, bears and llamas. The Brazilian savanna was – 10 thousand years ago – a Serengeti 2.0. However, even though this huge mountain of animal protein is not around us anymore, there is NO convincing evidence that the first Brazilians have made them into a meal. NO evidence that the megafauna was hunted. Can anybody explain why? 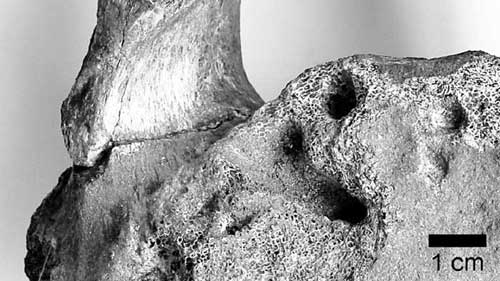 This old mistery came back to my mind after I interviewed the paleontologist Leonardo Santos Avilla, from Universidade Federal do Estado do Rio de Janeiro (Unirio), about his interesting work with Araxá (MG) mastodonts . He told me about tomographies made from these elephant’s extinct cousins that showed a foreign body that could be a spear point. The wound had heald, with means that the pachyderm (also known as gomphotherium) did not die from it.
This finding still need some confirmation but it would be the FIRST unquestionable evidence of a Brazilian Pleistoce monster being attacked by human beings. This means that we have better evidence that bettle larvae ate mastodonts (the above vertebra shows evidence that these scavengers were present in the rotting corpse) than we have for humans eating them.
Just to contextualize: it is good to remember that there is data that the megafauna (mastodonts) was used as food source 12.500 years ago, in Monte Verde (Chile) and a couple of examples in Argentina and andean countries. Apart from these examples, there is little evidence taht the first human inhabitants of this continent (as known as paleoindians) have hunted these large mammals.
Clovis? Clovis who?
The weirdest thing is that the so-called Clovis culture – apparently the oldest and certainly most known culture of this time period – seems to have survived almost exclusively eating mamoths in North America.The famous Clovis spear point, beautifully crafted and with special grooves to attach it to wooden spears, looks as if it was specially designed to hunt large mammals (and many were found in the middle of the ribs of proboscidians).
And here… well, here we only have a few paleoindian spear points. Most of the artifacts are very rudimentary. More importantly, the subsistence standards of places such as Lagoa Santa (MG), the most famous paleoindian occupation site in Brazil, suggests a major focus into the collection and capture of small animals such as armadillos, rodents and lizards. Who in the right mind would rather eat a lizard in a stick instead of a giant sloth beef?
I think that it is difficult to just conclude that Brazilian paleoindians were not skilled to make their own Clovis-like artifacts. Would it be possible that they invested in a strategy of “fewer risks and safer investiments” dedicated to smaller game? Finally, some researchers even suggest the existence of some sort of taboo associated to these large beast (totemic? religious? hygienic?) – that’s what the University of São Paulo bioanthropologist once suggested to me.
Of course that new findings, like the one from Dr. Avilla, may change this scenario, but I doubt it. Is this just a taphonomy problem, that the evidence of hunting has just disappeared or rotten? But that would have happened in the whole continent, which is unlikely. If anybody has a clue, fortheloveofGod tell me. Or write a paper.
============================================

This is a translated version of this post, written originally in Portuguese by Reinaldo José Lopes at Chapéu, Chicote e Carbono-14 and translated by Carlos Hotta.