How governments should (not) deal with epidemics

Brazilian government has been really concerned about swine flu. We have health agents in airports and ports to detect possible flu cases. But let’s see how it deals with Dengue, another infectious disease with a well-known life cycle, efficient prevention strategies and distinguishable symptoms. 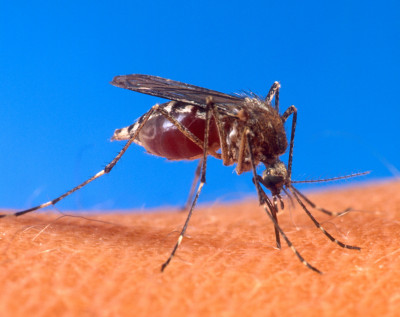 Dengue is a serious issue in Americas, with more than 850,000 cases only in 2008. Until 2007, Brazil had detected the Dengue´s serotypes 1, 2 and 3. In April, 2008 researchers found at Manaus, the largest city in Brazilian Amazon forest, Dengue virus type 4 in three patients with no history of traveling outside the city. This was a matter of great concern because serotype 4 has a low prevalence but is involved with a bigger occurrence of dengue hemorrhagic fever. [1]

However, instead of taking action, Brazilian Health Ministry made a public announcement denying that serotype 4 occurs in Brazil and has accused the laboratory of contamination, despite the fact that this laboratory does not maintain any dengue 4 virus in culture. Later, a EID publication about Amazon endemic diseases that has a Health Ministry worker (R. Glatt) as one of the authors, claimed, with no supporting reference, that:

In April this year, some of my lab colleagues reanalyzed the dengue virus sequences with a more phylogenetic approach as the authors of the previous publication had typed the virus using BLAST, which is not the best tool to find the closest relatives of the virus.[2]

Not surprisingly, not only the results were confirmed but things got a little more interesting: they found that Dengue 4 of the genotype II (there are 3 genotypes: I, II and III) have been in America for at least 20 years as it was found in Brazil in 1982. However, the closest relative to the serotypes isolated in Manaus is the genotype I, that circulates only in Asia. 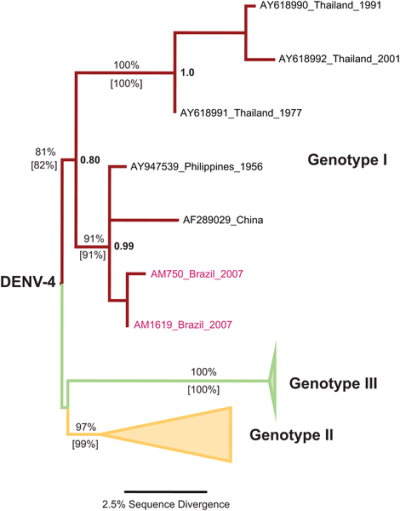 In conclusion, not only do we have Dengue 4 circulating in Brazil, in low frequencies (yet), but it also came from Asia! This could become a great problem to the country if the right measures are not taken.

In the year that Brazil government denied dengue 4, more than 700,000 people were infected by dengue. Up to March 2009, there have been 126,139 suspect cases, including several epidemics in a few cities in Bahia State like Jequié, where at least 5% of the population having contracted the virus.

In conclusion, instead of paying attention at science funded by itself (virtually all research done in Brazil is financed by public money), the Brazilian Health Ministry
has opted to have corporativist attitude and simply denied the
discovery. The results of this attitude are, unfortunately, human lives as we already had 23 confirmed deaths in 2009.

This is a post written by Atila at Rainha Vermelha. Revised by Carlos Hotta.