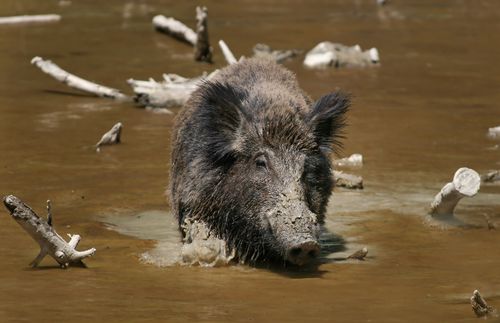 It is quite hard to think of anything other than the aporkalypse (get it?) these days (even more if you are working in real-time journalism… *sigh*). So, let’s put the hysteria to use in favor of a very important archaeological lesson: how the domestication of pigs and other animals transformed health in human societies? In many cases, to worse… Much worse.
Summarizing and simplifying things, it is almost certain that our species has to deal with rapidly spreading -and potentially deadly- infectious diseases only because it learned to breed other animals in large numbers. Flu (of course!), smallpox, whooping cough, measles, cholera, diphtheria, typhus, TB – imagine how many people died from something on that list before the development of antibiotics and modern medicine.
It just so happens that all those diseases started their “career” as zoonoses, judging by their pathogens genetic likeness with viruses or microorganisms carried by domestic animals. This hypothesis is one of the main elements of the – already classic – book “Guns, Germs and Steel”, by the american biogeographer Jared Diamond, from UCLA (hence the title of this post). You just have to look at the process the transformed wild boars (like the cute fella from the photo above) into little domestic piglets to realize that the epidemiological dynamic turned inside-out because of the domestication.
Densities, densities
First, one can hardly compare human and animal populations densities before and after domestication events. It’s true that big wild mammals such as horses, boars, sheep and cattle lived in big herds before turning into farm creatures, but rarely so many of them were confined in small space like they are now, thanks to us.
And, of course, a positive feedback happened between human and animal populations; the amount of animal protein (meats and milk), fuel (feces), fertilizer (feces once more), source material (bones) and clothes (hide) available to breeders of large mammals is exponentially superior to the amount that could be gotten by even the best hunters/gatherers. Include agriculture and you have, of course, the possibility of sustain lots more people in the same land space. Luckily, this excess people, also thanks to the animals, gets more mobile, being able to move and colonize more land on oxen, buffalo, donkeys and horseback.
Think, for a moment, how unnatural (from the point of view of 6 million years of human evolution) the situation of the last ten millennia is: the chance the hunters/gatherers had of close contact with large mammals or even flocks of birds was negligible. Oog would thank the gods if he killed one bison a month. But now you have a lot of people and a lot of animals jammed in the same settlement; people messing with manure, meat, blood, lard and who-knows-what-else from cows, pigs and goats. (The “who-knows-what-else” is not just for dramatic effect. In Papua-New Guinea, women of certain tribes breastfeed pigs. Yep, breastfeed pigs.)
This unprecedented scenario not only made disease transmission easier between humans and animals, but also helped epidemic infectious diseases to become self-sustainable for first time in our history. If you are a hunter/gatherer who is unpleasantly infected by a killer pathogen from, say, monkeys, you can rest assure in the knowledge that your whole tribe of 50 will either died completely or be totally immune, very quickly. And the disease will very likely stay there, since those 50 poor bastards rarely contact other groups.
The whole thing goes haywire when we have dense populations of breeders e growers interconnected by commercial routes and constant extra-tribal interaction. Now even killer pathogens can benefit from the population critical mass to spread from one or more entire continents and do lots and lots of damage. Something very unlikely to happen in pre-domestication times.
Winners and losers
Diamond extracts an interesting conclusion from this whole line of reason: when invading Europeans set foot in America, Polynesia and Australia for the first time, who died from smallpox, flu, measles and other Euro-asian ailments were the natives. There is not one case of a native disease killing an European settler.

None of these people domesticated animals in large scales, with the exception of Incan llamas (which are the only American big mammal [1] domesticated).
Diamond notes that, together with lower population density, lack of domestic animals is the key. The Europeans were the descendants of those who acquired immunity and survived a vast quantity of microorganisms transferred by animals that wiped out truckloads of people in Eurasia. The natives were not.
One cannot deny the conclusion taken from this is quite gloomy. Modern hygiene measures and continuous follow-up can help, but if History serves as guide, the intensive breeding of animals and intensive human contact with them will produce many more epidemic scares in the future.
[1] It has been noted – in a comment – that Andes people also domesticated guinea pigs. Besides, almost all American tribes had dogs, like many Polynesians. Nothing, however, comparable, in scale or variety, to mammals domesticated in Eurasia.
——
This is a translated version of this post, written originally in Portuguese by Reinaldo José Lopes at Chapéu, Chicote e Carbono-14 and translated by Igor Santos.