When the penguins invade the Standard Model

This is a translated version of this post, written originally in Portuguese by Renan Picoreti at N-dimensional and translated by Carlos Hotta.

It is not unusual to find weird names in the middle of Physic theories. Arguably, the most famous are the one given to second and third generation quarks: Charm, Strange, Bottom and Top. The last two used to be called Beauty and Truth but, truly, the new names did not exactly recovered their reputation. =P
The reader may find the names given to the quarks quite normal, or even amusing. However, I doubt that you will disagree that calling something in Physics “penguin” is pure crazyness.
When you study the decay and reactions of elementary particles, we use a series of drawings called Feynman Diagrams help the calculations. These diagrans are useful because they indicate the equations that inform us the probabiliy of decay or reation.
One of those diagrans is the Penguim Diagram, which look like this: 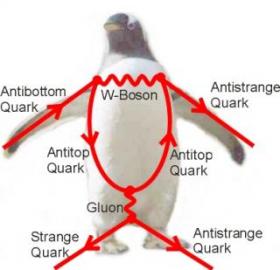 “Well – you may think – this thing really looks like a penguin, doesn´t it? Maybe a very creative physicist (like almost alll of them) gave this name due to the similarities.”
I am sorry to inform you that the story behind this name is more interesting. Everything started with John Ellis (reproduced from here by Mikhail Shifman):

“Mary K. [Gaillard], Dimitri [Nanopoulos], and I first got interested in what are now called penguin diagrams while we were studying CP violation in the Standard Model in 1976… The penguin name came in 1977, as follows.

In the spring of 1977, Mike Chanowitz, Mary K. and I wrote a paper on GUTs [Grand Unified Theories] predicting the b quark mass before it was found. When it was found a few weeks later, Mary K., Dimitri, Serge Rudaz and I immediately started working on its phenomenology.

That summer, there was a student at CERN, Melissa Franklin, who is now an experimentalist at Harvard. One evening, she, I, and Serge went to a pub, and she and I started a game of darts. We made a bet that if I lost I had to put the word penguin into my next paper. She actually left the darts game before the end, and was replaced by Serge, who beat me. Nevertheless, I felt obligated to carry out the conditions of the bet.

For some time, it was not clear to me how to get the word into this b quark paper that we were writing at the time…. Later…I had a sudden flash that the famous diagrams look like penguins. So we put the name into our paper, and the rest, as they say, is history.”

Now, my dear readers, you know that you should never underestimate the consequences of a bet among physicists.