A pixel, from Earth to the Moon, to the infinite and beyond

Can you imagine a 1.700 km rock about 400.000 km from Earth? It is really hard for us to picture that. This rock, however, is our Moon. It is really difficult to grasp the Moon’s distance and dimensions, specially because our senses fool us. Try to represent with your hands, or even your arms, the size of the Moon in the sky. If you did that, you probably made a circle that is much larger than the one you see in the sky.
The angular size of the Moon is only half of a degree. If you extend your arm in front of you with your thumb pointing up, its width is about two degrees. That is right: if you extend your thumb towards the the Moon, you can cover it about four times. Even thought the Moon is 1.700 km. Go on and check yourself! ALmost everyone of us will overestimate the size of the Moon in the sky. Some of us will even use their arms when estimating it! This is called the Moon illusion. And this is why the Moon looks so tiny when we take a picture of it: cameras do not lie but our brains do.
We have been observing the sky above us for thousands and thousands of years. We have understood the celestial mechanics for a few centuries. And four decades ago, humans, with no more than six degrees of separation from you and I, have landed in the Moon. There you could not cover the Moon with your thumbs (unless you put then directly in front of your eyes, an occasion when you would see little else).
There are many ways to express how fantastic it was to land in the Moon. As we are talking about distances, please have a look at the image bellow – the inspiration of this post – and join me towards the infinite — and beyond.

This image was created by Drew Olbrich, that wanted to correctly represent the scale between sizes and distances of the Earth and the Moon. We are used to see the pair represented in an artistic way, ignoring their true proportion. This is understandable, as you can see the emptiness between both bodies. This is the truth, however, the space is a great emptiness. In order to see this image in space, you would have to be approximately 560.000 km from where you are now. You may click the image to visit Olbritch’s site and check the image with higher resolution.
“This image has the most impact if you make it fill your whole screen and then turn off all the lights in the room” recommends Olbrich. “Stare at it for a while and try to imagine that you’re out in space looking back through some kind of bizarre porthole.”
Speaking of higher resolution, while I was contemplating Olbrich’s image I started thinking of what would be the size of Apollo space shuttle in the image. It would certainly be so tiny that it would be invisible to us. The next geekiest question would be: what should be the image’s minimum resolution to make the modules appear as a single pixel? 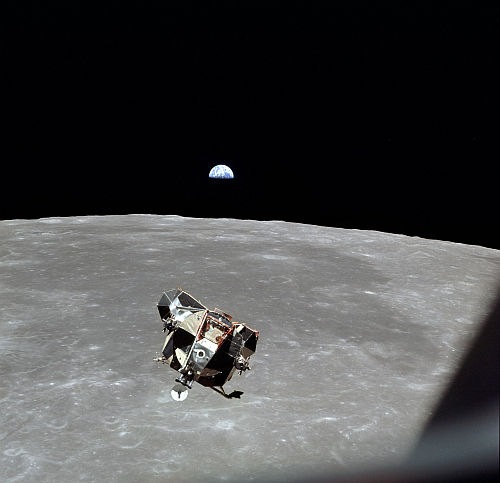 The command and service modules were about 11 meters high. The lunar module that landed in the Moon was about 6 meters high. Let’s be generous (and a bit mathematically lazy) and consider the whole set as 20 meters. If they were the size of a pixel, than the 400.000 km, or 400 million meters that separate the Earth from the Moon would occupy 20 million pixels.
20 million pixels is the equivalent of 10.147 full-HDTVs side by side if your resolution is 1980 pixels in the width. If your horizontal resolution is 1024, then you would need 10.531 HDTVs. If your screen is about 40 cm, it would be almost 4 km of screens.
Amongst all these screens, running for kilometers, a single point, a tiny pixel represents Apollo space shuttle. Everything else would be empty space. A single dust particle could accidentally cover the pixel. A dead pixel would cover it. And the three astronauts inside the shuttle would be even smaller. They would be still smaller than a pixel even if with kilometers of screens.
Now, picture yourself being inside this lone pixel. 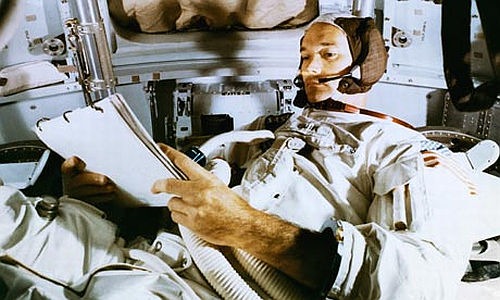 “I am alone now, truly alone, and absolutely isolated from any known life.” wrote Michael Collins while he was orbiting the Moon alone. Neil Armstrong and Buzz Aldrin were walking in our satellite for the first time in our epic naked-primate history. Collins loneliness may not seem so great if you imagine that, even though he was far from Earth, his two friends were “just” 105 km away. However, Collins was orbiting the Moon. He was 105 km away from his two friends only when he was directly above then. But he would still be in orbit. For two revolutions, Collins was over the dark side of the Moon, where not only were Amstrong or Aldrin unseen but communication with Earth was also impossible. These were the moments he was “truly alone”.
Collins also confided in his notes that “My secret terror for the last six months has been leaving them on the Moon and returning to Earth alone”. Try to imagine being smaller than that pixel and having to go through 4 kilometers of screens. “Now I am within minutes of finding out the truth of the matter, if they fail to rise from the surface, or crash back into it, I am not going to commit suicide; I am coming home, forthwith, but I will be a marked man for life and I know it.”
Fearful words that show an unknown side of Apollo 11 mission and the “forgotten astronaut”, detailed in an excellent article from Robin McKie at the Guardian. We now know that nothing like that happened. Fortunately, all manned missions to the Moon had three passengers counting with each other.
Which reminds me of something else.
Right now we are more than 6 billion astronauts that, in the words of Buckminster Fuller, make the Spaceship Earth. We are not alone, but all we can count on is each other. And while the Earth would fill a lot of screens, our planet is not really large. And is only one.

It would be impossible to end this post without mentioning that, as well as Apollo could be represented as a pixel lost in the middle of thousands of screens, Earth itself is a small pixel at the edge of the Solar Sysrem. It is a Pale Blue Dot. Collins fears were not a sign of weakness but a sign of sanity. These are the fears we need to have when we are reminded of how “truly alone” we are and how we are “absolutel isolated from any known life” besides our own, with or without considering other intelligent life in the rest of the Galaxy.
The loneliness abyss Collins felt us the same as we feel, in our Pale Blue Dot, since the dawn of mankind in the planet. The only difference is that many of us have not realized it yet.
We must take care of our tiny pixel. And seek other pixels – going to the infinite and beyond. And perhaps finding other lfeforms, “to boldly go where no man has gone before”. Or at least seed other pixels with naked primates. It should not be the fantasy of a few scifi geeks. It should be the natural drive of the whole species.
Collins conquered the abyss and safely returned with his friends, five other missions conquered the 400.000 km, landed on the Moon and came back. We are capable of achievements that are so literal and absurdly great that we cannot even grasp it – if oly we tried.