What you need to know about swine fever

This is a translated version of this post, written originally in Portuguese by Atila Iamarino at Rainha Vermelha.

What is swine fever, and why may it be so dangerous? Response in 8 steps:
1 – What is the flu virus, and what means H1N1:
2 – What is the danger of a different virus?
3 – Why is swine flu dangerous?
4 – What is the risk of a pandemic?
5 – Do we have defenses against the virus?
6 – Individual attitudes that can help. 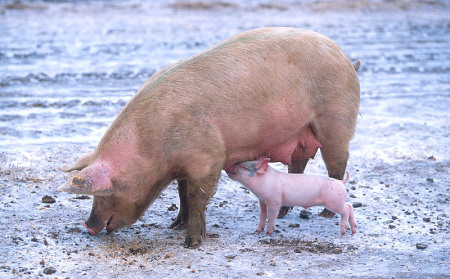 The flu is caused by a virus called influenza. There are 3 types of influenza: A, B and C. The influenza A is more variable and infects more people every year. It has 8 pieces of RNA (yes, RNA, not DNA) within its capsule. Two of its proteins are very important to understand: one is called Hemagglutinin, which is outside the virus and makes contact with the cell. Hemagglutinin has this name because when we put the virus in a drop of blood, red blood cells are agglutinated (hemo agglutinins, hemagglutinin). The other is Neuraminidase, which breaks the sugar to which hemagglutinin binds, in order to free the newly formed viruses.

Both hemagglutinin and neuraminidase are pointed outside of the virus, in consequence, these proteins are usually recognized by antibodies and used in diagnostic tests. That is why the strains of influenza are named by the letters HN, like H1N1, H3N2, according to the types of proteins.

There are 16 known types of hemagglutinin and 9 neuraminidase. Only a few are common in humans: H1, H2 and H3 and N1 and N2. All the other types are found in waterfowl, particularly ducks, that are the natural reservoir of influenza A. Migratory birds mix the virus across the world. They do not have flu symptoms and influenza infects their digestive system rather than the respiratory tract. When they stop to feed in water bodies during the migration and defecate in water, they spread the influenza. The virus may last up to 30 days in cold waters like in a lake. The most dangerous types, which kill many chickens and people when transmitted, are H5 and H7. [1] 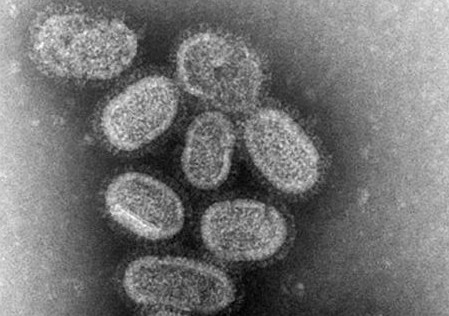 2 – What is the danger of a different virus?

We lack immunity to influenza A because this virus mutates too fast [2]. Two phenomena are important: the drift, in which the virus accumulates small changes in H and N genes that, after some time, make them unrecognizable to our immune system. More importantly, and more often than thought, is the shift. The shift happens when two different influenza enter the same cell mix their genetic material, and some of the eight RNA strands comes from virus x and others comes from virus y. When this happens, the virus changes abruptly, and our immune system is completely unprepared. This is the biggest reason of vaccines fail. As there is a delay between collecting the virus and producing the vaccine, every year we have to study the virus and try to predict which group will be the most important in the epidemic.

That is why most of the influenza pandemic starts in Asia. You can easily picture popular markets crowded with people, where ducks, wild ducks, chickens, geese and pigs are sold. Another factor is how pigs are fed: they put the cage of the ducks and chickens on top of the cage of the pigs and provide food only for birds. This creates ideal conditions for the emergence of avian viruses infecting humans.

3 – Why is swine fever dangerous?

The most common virus in pigs is the H1N1. The virus that infected people in Mexico and California was sequenced by a Canadian team. It seems to be a reassortment between two pig strains: one that circulates in America and other that circulates in Europe. None of these strains is known to infect humans so there is probably little immunity to this virus in population. None of the genes come from H5N1, which caused the bird flu, or human strains.

Another worrying factor is that the current swine influenza virus has infected mostly young people. Typically, children and elderly people suffering from flu. The pattern of aggressive virus that attacks young people with the strong immune system and healthy, is a remarkable characteristic of Spanish Flu of 1918. This does not seems to be the case of swine fever, and we don’t know all the cases to see the death rate between youth.

This is not the first outbreak of Swine Flu. The largest outbreak occurred in Fort Dix, an American military camp in 1976 and taught a great lesson for the health authorities. At that time, it was expected to be a large influenza outbreak, and everything indicated that the swine flu virus was attacking the young soldiers. The pressure generated from 500 sick people and one death made wrong decisions to be taken, and there was a mass vaccination in the U.S. with drastic consequences. I recommend reading the book The incoming Plague, by Laurie Garrett, who explains this in details.

The point is that WHO, the main responsible for monitoring flu outbreaks around the world, does not work with “if we have an influenza pandemic”, but “when we will have”. With population size we have reached, and the ease of transportation we have today, it is very likely that a dangerous strain of influenza would cause great damage. Be the pandemic caused by avian influenza virus, swine or any other.

Here is a not so exciting part of the 10 items list on pandemic influenza from WHO:
“We are on the verge of an outbreak. All countries will be affected. The medical supplies will be inadequate. Many deaths will occur. The economic and social disruption will be enormous.”

The WHO has a world wide warning that goes from 1 to 6, 1 means all quiet, no dangerous disease and at 6 things get a little complicated, the pandemic is running loose. We are in stage 5, there is a disease being transmitted person to person in more than oneWHO region.

5 – Do we have defenses against the virus?

There are only a few antiviral drugs because, unlike bacteria, the virus uses the host cells to reproduce, leaving justa  few possible targets. In the case of influenza, there are the neuraminidase inhibitors, such as Tamiflu and Amantadine, which prevent the virus to release the cell. The high mutation rate of the virus allows it to easily develop resistance to drugs, and do not know what will happen to H1N1.

The current strain is resistant to amantadine and rimantadine, but susceptible to Tamiflu.

Another defense against the flu is the vaccine. They are the most inexpensive and effective protection against the flu. The issue is the agility to develop a vaccine for the virus and distribute to population in time. And there is an order of priorities for vaccination. Key people at first, like government officials, doctors, then more susceptible people, such as elderly and children, and finally the population as a whole.

6 – Anyway, there are individual attitudes that may help:

Wash your hands thoroughly and frequently. Contrary to what we imagine, it is easier to contract the influenza with a handshake than a kiss on the face. If someone cold covers the sneezes with the hand and you handshake this person, you can put your hand in contact with eye and nose, and contract the virus. So, wash hands thoroughly and regularly, and if you get flu, cover your sneeze with a tissue and throw away.

Avoid crowds and enclosed spaces, mainly with air-conditioning. The Influenza lasts longer in the dry and cold, and a room with an air-conditioned mixes several people in conditions for the virus. [4] But remember, DON’T PANIC!

The Coming Plague: Newly Emerging Diseases in a World Out of Balance

by Laurie Garret. A very throrough book that includes the 1918 spanish flu, the 1976 swine flu and some perspectives for the future.