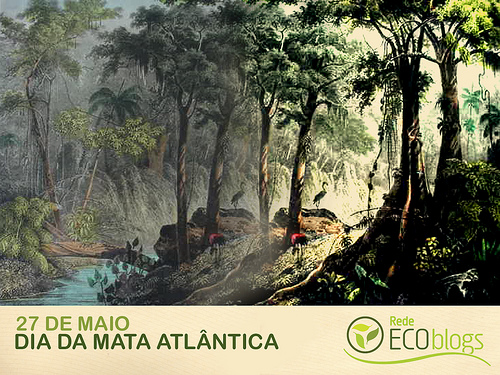 As you probably have noticed, there are four flamingoes displayed conspicuously in the image. However, there are NO flamingoes in the Atlantic Forest! Of course you may find flamingoes in Chile, Peru and Argentina, even in the extreme south of Brazil, but not in the our tropical forests. A very bad mistake for a network that is supposed to be all about ecology.
My first impulse was to blame their designer as the image was clearly photoshoped (the flamingos and their whereabouts were duplicated). Another possibility was that the image was not from the Atlantic Forest but somewhere else. Little I knew that the history behind image is way cool than a common intertube mistake.
The first step was to find the author of the original image and compare it to the one above. Paula Signorini helped me finding another example of the image:

At this other website, the image is annotated as “Rugendas – Mantiqueira”. In this image, the birds are blue, which was also added afterward as Rugendas published these images as lithographs in the beggining of the XIX century.
Rugendas was a German painter that is famous in Brazil for his illustrations depicting the Brazilian landscape and the people that lived here. His most famous work is the book “Picturesque Voyage to Brazil”, published in 1835. This book is the result of his adventures following the Langsdorff Expedition,which he abandoned (or was abandoned) before it arrived at the Amazon forest.
According to the ornithologist Dr. Guilherme Renzo Rocha Brito, who had help from the book “Rugendas e o Brasil” from Pablo Diener and Maria de Fátima Costa (editora Capivara), “Rugendas brought the original illustrations, made using oil paints or pencils, and part of the texts (actually, nobody knows who wrote those texts)… an editor put some money on the project and hired a few (8, I think) artists to make the lithographs. These artists, who had never been to Brazil, transformed the original illustration in stones. However, they took a lot of liberties in this transition, putting their own interpretations of Brazil and even signing the art!”
In summary: the lithographs where made by people that did not know Brazil and tried to carve the illustrations in stone only reading some texts and looking at Rugendas original work. Many of the artists, like the French A. Joly, the author of the flamingo pictures, interpreted the descriptions in their own way adding plant and animals that were not Brazilian (well, as the original illustrations were lost, it may be wring to blame Joly for the birds).
von Marthius, a naturalist that explored Brazil even commented: “I saw Rugendas’ drawing notebook. It seems to me that there is more aesthetic than truth. There are, for example, African birds in the jungle and Brazilian coniferous with palm trees in the mountains.(…) I have been seeing many of Rugendas’ work. I recommend it as an artistic conception and as a piece of French lithography. However, it is true that it is noticeable that many of these representations were done in Europe.”
Guilherme Brito also notes that the illustration is not from Serra da Mantiqueira, as written above, but the “Forét Viérge prés Manqueritipa / dans la province de Rio de Janeiro“or the Virgin Forest of Mangaratiba, at Rio de Janeiro province.
The lesson we take home is that illustrators try to retouch images since the XIX centuries, sometimes with disastrous results. What we cannot do is to replicate, and duplicate, the error in the XXI century.
Thanks to Lama for the help.
Images: Ecoblogs e As Minas Gerais
========================
This post was translated by Carlos Hotta from the original published at the Brazilian blog Brontossauros em meu Jardim.