The miracle of the falling cat

A cat fell from the 26th floor in New York. What happened to the kitten? Nothing. 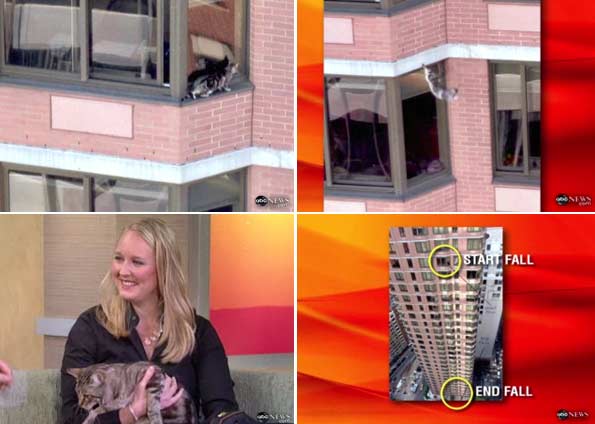 The name of the cat is Lucky. Of course, with a name like that, it was no surprise that a miracle saved him. According to the owner:

“That’s the thing about Lucky Miraculous,” HOSTETLER told “GMA.” “He has been [lucky] since we got him.” Source

If the cat was really lucky, would it fall from the window? Does every miracle requires something bad happening before?

Actually, the cat would be more lucky if he had dropped the 7th floor and survived. Why?

Based on the records of cat falls, the rule “the higher, the worse” is not true. Moreover, a cat survived a 32 floors fall in the concrete, something like 450 feet, and only spent two days of observation and got a chipped tooth. Here is the figure everyone wants to see: 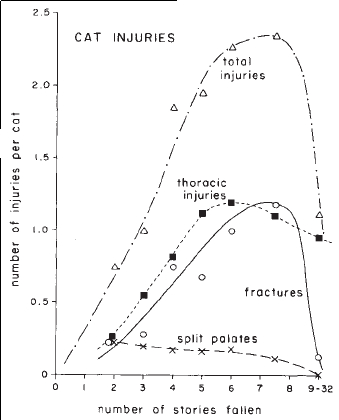 DISCLAIMER, nobody was throwing kittens out the window to calculate
the damage, these number are simply records of veterinary care
emergencies.

The majority of cats (90%) in this study survived (omitting the ones euthanatized by owners unable to afford treatment). The most common traumas of those who died were shock and thoracic injuries. The figure above shows that the frequency of injuries increase with the height but, instead of continuing and stabilizing at 100%, as would have happened if we were talking about people, it starts to fall! Cats suffer worst fates when they fall between the sixth and eighth floor.

Not all animals need to be afraid of gravity! Indeed, the vast majority of them, in number and diversity, do not. The damage suffered by cats that fall from different heights depends on two factors: the force that results from the animal’s mass and acceleration (gravity)  F = Mxa and the area where the force is distributed F/A. Here lies the difference.

The larger the animal, the heavier it is, but the area it occupies does not increase proportionately. The size determines the weight of the animal, so the force it exerts when it falls increases in three dimensions, cubic. But the surface of the animal increases in two dimensions, a square relation. The greater the surface/volume ratio, the more air resistance the animal does and smaller is the final speed during his fall. Just think of a aluminum sheet dropping open or mashed.This means that ants, beetles, spiders and mice also do not need to worry about the height they fall. A fall of 1 foot or 20 thousand feet does not matter for them, since the final speed in fall is low and they distribute the impact in a relatively larger area. Meanwhile, any little fall for an elephant is dangerous.

When a cat falls, its terminal velocity (maximum speed in the fall) is about 60 mph, and the impact is distributed among the 4 limbs because the effective gyroscope that allows cats to turn during the fall and land almost always on feet, the vestibular system – hence the difference between a cat and a dog falling. Humans reach a terminal velocity of 120 mph and usually land on their head or legs, which means a more lethal fall, with more internal bleeding and head injuries.

When cats begin to fall, they stretch the limbs and increase their tension. When the height is greater, as in the case of higher floors, the cat has enough time to relax and let their limbs stay horizontally, increasing its surface, reducing the terminal velocity and distributing better the impact. By flexing the legs, they absorb the impact, as a spring. One of the most common injuries in cat drops is broken jaw, because the body relax as a whole and lets the jaw hit the floor.

Through their climbers history, the evolution of cats explains their nine lives. They need no miracle for that.