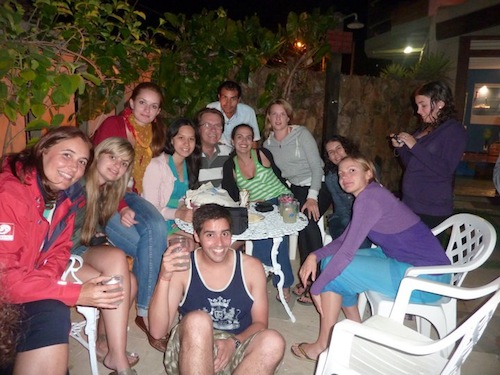 The day started with Dra. Cristine Barreto, a marine biologist with PhD at the São Paulo University and posdoc at the London Imperial College that felt in love for education and today is the main Instructional Designer in Brazil. She was going to explain concepts such as ‘Information Architecture’, which I consider very important for young scientists, when a hipoglicemia crisis interrupted her class soon after it begun. After 1h of serum everything was ok and we are planning to offer her lesson online soon. As good biologists, the students were excited to know that a Humpback whales washed ashore on Búzios (near by city) and with the unusual sighting of a penguin in Arraial. On the afternoon, I lead the student’s “two minutes conference”. If on Sunday they had to write a paragraph about their work, today had they were challenged to convince an imaginary Bill Gates, who was coincidently in front of them at the bank line for next the 2 min, to finance their project. The activity, aimed to train abilities such as information selection and communication with the lay Public, was a success if you consider its potential to identify imperfections in the way students present their data. I believe it was useful for them to prepare the seminaries that would start on Wednesday. That night the students organized a great barbecue that not even the rain spoiled. The social event was not a great success only for those who tried to work or go to bed early.
Tags '2 min conference', Information architecture, Instructional Design